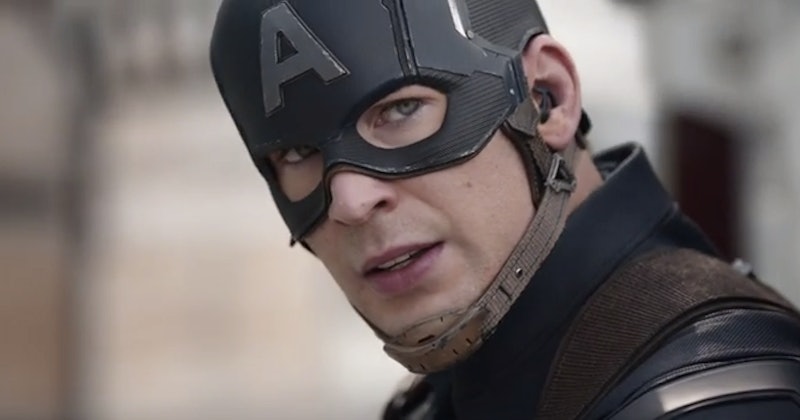 In a trailer for one of the most highly-anticipated movies of the year, Captain America: Civil War is here to fulfil all of your dreams. Not only does the Captain America: Civil War trailer feature the new Spider-Man, we also get to see way more action, as well as appearances from all of our faves like Iron Man, Black Widow, and Captain America himself. While I don't really understand the appeal of multiple superhero movies being churned out like Twilight sequels myself, I can appreciate how good Chris Evans looks at all times. Plus, let's not forget Gossip Girl-alum Sebastian Stan who is back as Cap's bestie Bucky. Now that's some talent I can get behind.

While there's still a bit of a wait until Captain America: Civil War comes out on May 6, the trailer is a massive treat for comic book fans eager to find out what happens next in the Marvel Universe. The first trailer firmly pitted Captain America against Iron Man, but didn't give us much more information. The newest one showcases much more of the movie's plot, and gives us glimpses of all our faves in their uniforms ready to battle over their values and their future.

Without further ado, here are some of the best GIFs from the new Captain America: Civil War trailer.

Beautiful Captain America is back in May 2016.

2. Iron Man Is Not Happy With Cap

4. There Are A Lot Of Chase Scenes

Sebastian Stan can really ride a bike (thanks to CGI, I'm sure).

That seems like a bad idea Bucky. Why would you do that?

This is why they pay him the big bucks.

Not the Iron Man suit. A suit suit.

13. Evans And Johansson Back Together Once More

The dream team is reunited.

14. The Scarlet Witch Is Here

15. Is Something Going On Between Olsen And Evans?

I also thought he'd end up with Scarlett Johansson. I know she's with the Hulk right now, but seriously.

17. There Are Found Footage Explosions

"Sometimes I wanna punch you in your perfect teeth," he tells Captain America. Classic.

20. Something Comes Out Of The Sea

25. And Is Generally Awesome

Thank goodness she's in this movie.

26. What Does Captain America Have On His Hands?

It's Spider-Man. You knew that though, didn't you?

29. Most Of The Avengers Are Here

Watch the trailer for yourself now, and get yourself as pumped as am I about the movie.