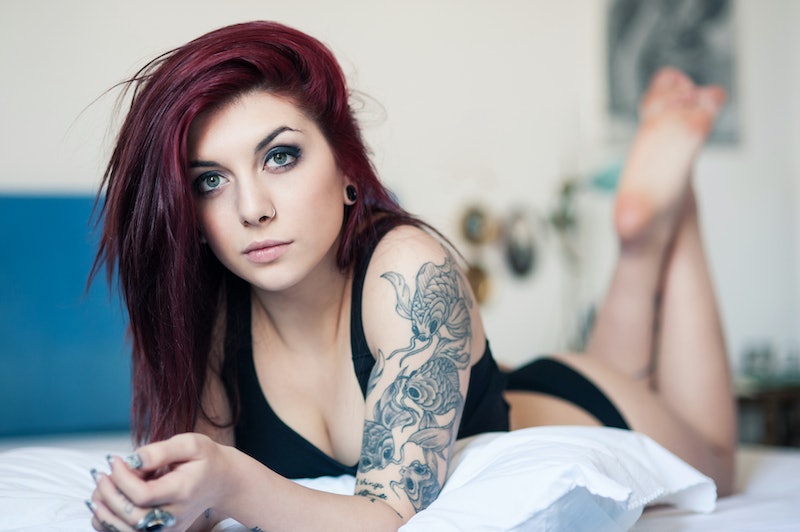 According to sexual psychologist Justin Lehmiller, sexual desire issues are one of the most common reasons why couples go to sex therapy. Clinically, it’s known as “sexual desire discrepancy.” For instance, one partner wants to have sex constantly while the other is good every other holiday and anniversary. When someone has a higher sex drive than their partner, it can possibly cause some strain in the relationship. When it comes to sex, it can feel like our idea of what’s "normal" means we’re doing it all the time. If we’re not, it must mean there’s something wrong in our relationship. But as this new Science of Us video explains, this idea of what a “normal” sex drive looks like is probably wrong.

In fact, your sex drive is probably normal, whether you want it two times a day or two times a month.

While we can’t forget that some women live with HSDD, hypoactive sexual desire disorder, where the experience a loss of libido, those without this frustrating form of sexual dysfunction may think that wanting sex all the time may make them seem like a “freak,” or even not wanting sex all the time means something's wrong. But rest assured, that is not the case. As the video finds, we really need to stop believing there’s only one set norm when it comes to sex. Here’s why:

1. Wanting Sex All The Time Is Only One Type Of Desire

Although TV, movies, and pretty much anyone wants you to believe that everyone out there in the world is getting it on at any given moment, that’s really not the case. But there is a scientific term for when people seemingly lust after one another constantly and that’s “spontaneous desire.”

2. There's Another Type That Takes A Little More Time And Effort

According to sex researcher, Emily Nagoski, there’s another type labeled “responsive desire,” which means you start getting in the mood AFTER you’re aroused. For example, let’s say you’re alone and finishing up a project. Sex is probably the furthest thing from your mind. Then, your partner comes over. You make small talk, start kissing...

3. Sex Isn’t A Necessity To Survive

According to the video, the phrase “sex drive” may be part of the problem. Drive means an “uncomfortable internal state." In order to reach a level of internal comfort, we must try to satisfy that survival need. They even give the example of eating or breathing because obviously, we need to eat and breathe to live. But sex, on the other hand, is way different. Though it may be hard to believe for some people, you’re not going to die all of a sudden because you haven’t had sex in a week. Rest assured, many people have gone through long sexual dry spells and came out of it alive.

4. Sex Is More Of An Incentive Motivation System

As the Incentive Theory of Motivation says, people are pulled towards things with positive incentives and turned off by behaviors with negative incentives. So yes, sex feels good and brings us close to people we find attractive. But we shouldn’t think of it as a need. As the video says, “It’s less like a hunger and more like a curiosity.”

Some people have little or maybe even no spontaneous desire for sex. According to Nagosaki, the best way to make your sex life amazing is to “put pleasure at the center of your definition of sexual well-being and allow desire to emerge in response to sensations you enjoy.”

Check out the entire video below: