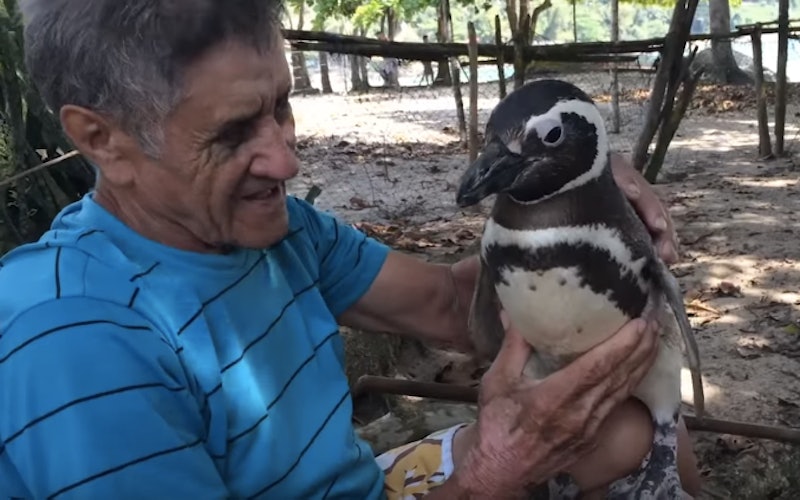 A heartwarming story has graced the Interwebs, and it may be one of the cutest instance of interspecies-friendship to date! According to The Wall Street Journal, every year a special reunion takes place when a Magellanic penguin returns to the man who saved his life. The adorable flightless bird in question is nicknamed Dindim, and he swims 5,000 miles to meet his companion in Southeast Brazil.

Joao Pereira de Souza, now 71, found Dindim on the rocks by the beach of his island village outside Rio de Janeiro. The penguin was soaked in oil and fading fast when de Souza stepped in. With care and attention de Souza cleaned the penguin, let it rest in a shady place, and nursed it back to health on a diet of sardines. After a week, de Souza attempted to release it back into the wild, but (just like in my childhood fantasies) the adorable penguin wouldn't leave. Cue the warm and fuzzies.

The retired bricklayer and fisherman told Metro News of the experience, "He stayed with me for 11 months and then, just after he changed his coat with new feathers, he disappeared." But it seems his bird bestie couldn't stay away for too long. A few months later, Dindim was spotted again on the beach and followed de Souza home.

"Everyone said he wouldn’t return but he has been coming back to visit me for the past four years," de Souza said in an interview with Globo TV. "He arrives in June and leaves to go home in February and every year he becomes more affectionate as he appears even happier to see me." The penguin spends a total of approximately eight months of the years chilling with his pal de Souza.

For the other four months, it is believed that Dindim gets busy at the Magellanic penguin breeding colonies in Patagonia (the Southern tip of South America comprised of Chile and Argentina) and feeding grounds even further north. Magellanic penguin like Dindim live about 25 years in the wild, and can grow to be 30 inches tall and weigh up to 14 pounds. This breed of penguin is known for liking cold water, however on rare occasions a north-bound current may drop them off on tropical beaches such as the one on the Brazilian coast, says The Wall Street Journal. However, The Independent reports sightings of these penguins in Brazil is on the rise, and it is at least partially due to climate change.

Local fisherman say that Dindim will spend a week or so with de Souza, then return to the beach and leave. Within another few weeks or months the plucky penguin is back, tottering over to de Souza's home by the sea. Dindim does not seem to join other penguin brethren in his expeditions, and when he is spending time with de Souza, will keep other animals away from his friend.

Biologist Joao Paulo Krajewski described witnessing this special bond to The Independent, “I have never seen anything like this before. I think the penguin believes Joao is part of his family and probably a penguin as well. When he sees him he wags his tail like a dog and honks with delight.”

I have seen a lot of cute things in my life, but this combo of man and penguin is truly squee-worthy! It seems there is still hope for all those dreamers out there who want a penguin friend. Keep the hope alive and live by the sea!

To see Dindim and de Souza in action, check out the entire video here:

More like this
25 Quotes About Love To Share During Pride Month 2022
By Madeleine Aggeler and Emma Garza
How To See The Lunar Eclipse On May 15-16, 2022
By Kaitlyn Wylde
The Viral TikTok “30,000” Sound Fits Nearly Every Scenario
By Courtney Young
The 10 Best Cat Puzzle Feeders
By Lauren Moison
Get Even More From Bustle — Sign Up For The Newsletter