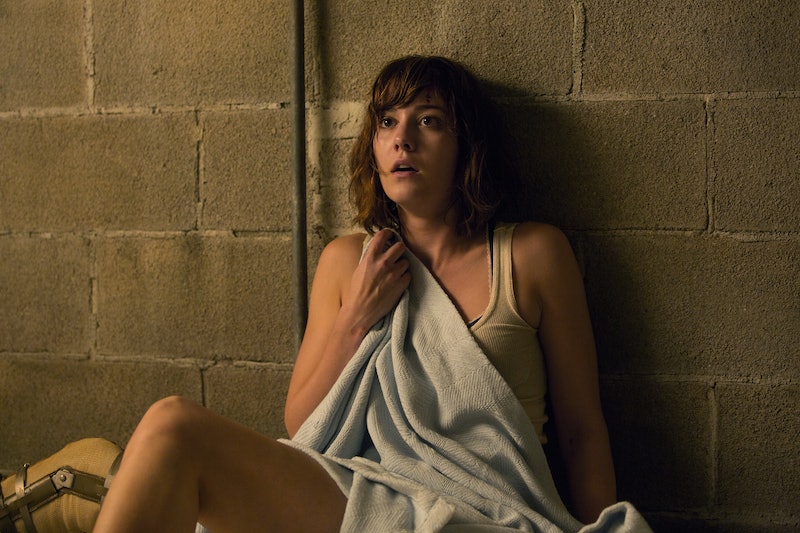 For spoiler reasons, no images of the mysterious new monster(s) have been released yet, so the best I can do is describe the two monsters that appear in the third act of 10 Cloverfield Lane. I think it goes without saying that there are major spoilers ahead. While the majority of 10 Cloverfield Lane is monster-free (in the traditional sense), the two monsters that do show up at the end are intense, and definitely will not disappoint those who love to see what kind of creatures filmmakers come up with.

The first monster that appears in the movie is dropped onto the ground from what looks like a spaceship. It acts like a kind of dog or predatory animal, searching out Michelle (Mary Elizabeth Winstead). It's low to the ground, about the size of a rhinoceros, and looks like a giant, grey sea cucumber, with spikes all across its oval shaped body. It doesn't appear to have eyes, but it does have a very creepy mouth. Almost like a telescope, the monster's mouth appeared to expand, with multiple sets of teeth, each more terrifying than the last. But that creature isn't even the worst of it.

The second monster in 10 Cloverfield Lane is enormous, and was much more like the giant Godzilla-like creation in Cloverfield, but also nothing like it at the same time. It's pretty crazy, and very difficult to see in detail. But as far as I can tell, the film shows the bigger monster to be sitting comfortably in the spaceship, suggesting that it is the real predator. Using some kind of technology (or long limbs?) the big alien monster grabs ahold of a car Michelle is hiding in and yanks it up to his mouth, which is enormous and also has multiple openings I'd rather never think about again.

To be honest, I might have been fighting the urge to close my eyes during the scenes with the monsters. (Yeah, I'm a scaredy cat and I'm not ashamed to admit it.) So, if those descriptions aren't good enough, you'll just have to see the movie and look at the monsters for yourself — but be warned, it isn't exactly a pretty sight.