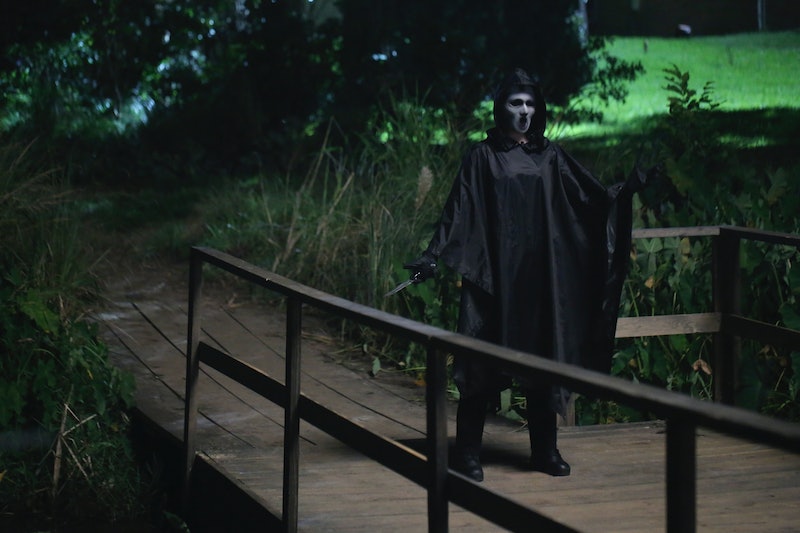 The Season 1 finale of Scream may have unmasked the show's vicious serial killer, but that doesn't mean that Emma and the rest of the Lakewood gang should sleep easy. MTV's slasher series returns for Season 2 on May 31, and for one Lakewood resident, life has gotten a whole lot worse. According to Deadline, fan favorite Audrey will be targeted in Season 2 of Scream, and the reason throws a lot of suspicion on Audrey herself. In the season finale, it was revealed that fan favorite Audrey had been in correspondence with Piper — aka the person under the Brandon James mask who made murder her hobby — implying that she was the accomplice who helped off a fair share of the Lakewood teens. According to spoilers from MTV, though, Audrey's dirty little secret won't stay hidden for long: someone knows about Audrey's connection to Piper, and they're not going to let this girl off the hook that easily.

The Audrey reveal was one of the biggest shockers of the Season 1 finale — while plenty of fans suspected that Piper was Brandon James' daughter (and therefore the killer) few people assumed that Audrey could be involved. After all, Audrey's own girlfriend was offed by the killer — she seemed to want the person brought to justice just as badly as Emma and Noah did. Of course, a person who helps carry out murders is also likely to be super good at faking emotions — there's definitely a chance that Audrey had us all fooled.

Still, I'm not so sure that Audrey is the villain (or, rather, villain-adjacent) that the show wants us to think she is. Tying up the whole Piper/Audrey mystery in a neat little bow like that just feels too easy for this show. That's why I'm sticking with my original theory: that while Audrey was working with Piper, she was only doing so before Piper went all Ghostface on the town. After all, we have no idea what was actually inside those letters, and unless Audrey is a total sociopath, I doubt they were filled with murder plans.

But, if Audrey really didn't act as Piper's accomplice in murder, what, exactly, does her Season 2 stalker have over her? It could be simple: maybe Audrey was helping Piper with some Brandon James research. Had Piper not been revealed to be the killer, Audrey's work would have been no big deal... but considering that sort of research would fuel Piper's quest for revenge, it's obvious why Audrey would want to keep that relationship hidden.

Only time will tell if Audrey's really a Big Bad, but right now I'm hoping that whoever is harassing her has the wrong girl.

More like this
20 Photos From The 'Stranger Things' Season 4 Premiere To Make You Feel Old
By Alyssa Lapid
Everything To Know About A Million Little Things' Reported Final Season
By Brad Witter
Oops! The 'Stranger Things' Monopoly Game Has Spoilers For Season 4
By Alyssa Lapid
Pete Davidson & Kate McKinnon Are Part Of A Reported Major SNL Cast Shakeup
By Brad Witter
Get Even More From Bustle — Sign Up For The Newsletter