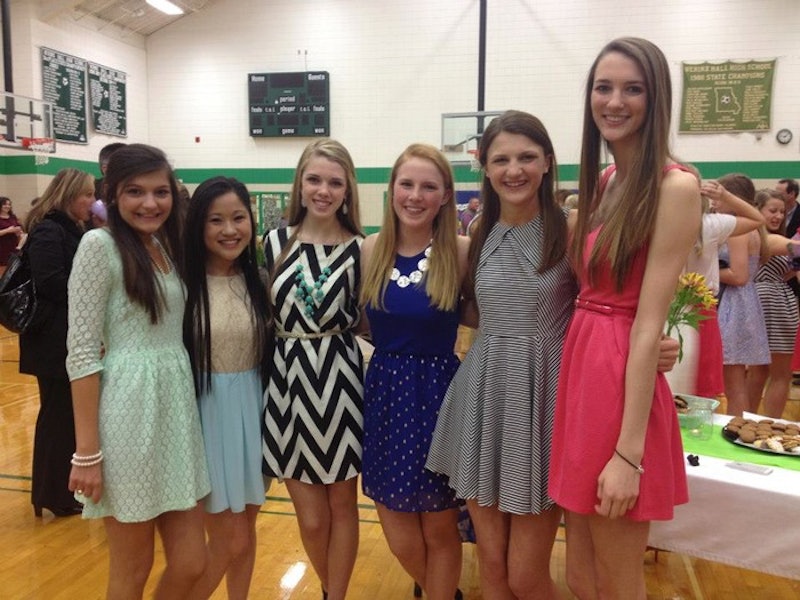 "I'm adopted," I would say, my kindergarten self trying to explain an issue so complex that I couldn't even understand it myself. As I've gotten older, this question has been thrown at me more times than I can count.

My parents are Caucasian. I was adopted from China, and my younger brother is from Vietnam. In our predominantly white neighborhood in St. Louis, I was forever an outsider — but I was actually one of many who were adopted after China introduced its infamous one-child policy in 1979 in order to slow its population growth. Families with more than one child were subject to heavy fines, so many mothers had no choice but to leave their babies behind. From 1999 to 2014, U.S. families adopted over 70,000 babies and children from China.

My parents adopted me when I was five months old, and they shared my story with me as early as I can remember. We read picture books (I can’t forget the classic, A Mother for Choco ) and watched movies about adoption. They even signed me up for a Chinese language class when I was five (it turned out to be much too difficult for me as a kindergartner). But despite my parents’ best efforts, I feel almost no connection to the country in which I was born. I’ve never returned, and to be honest, I’m not even sure if I ever want to. If I return to China, I'd feel like a foreigner in my own country. I may look the part, but I don't speak the language, and would definitely be a lost tourist.

Growing up, I constantly thought about what my life would have been like had my birth parents not given me up. I would be a completely different person, with other parents and different siblings.

“You were meant to be here with us. We’re lucky that you’re our daughter,” my mom would say to me whenever I asked why my birth parents had abandoned me. My parents reassured me that I belonged, but their warm words couldn't shelter me from the racism I encountered from both strangers and classmates alike. I was the only Asian student in my grade school class of 90 students. I remember looking at a class photo in the yearbook and realizing that I was different; an outsider with jet-black hair and almond-shaped eyes who looked nothing like my friends.

Throughout grade school, boys would squint their eyes at me and say that we looked alike. In sixth grade, my best friend made fun of the way the Chinese language sounded during a world history class. When I confronted her about it, she told me to "get over it and to stop being offended". I can’t remember how many times I hid in the bathroom after these types of incidents, begging the tears to stop.

“You’re a 'white Asian,' my friends would say, referring to the fact that I had white parents, didn’t speak Chinese, and never talked about my culture. They made it clear that their statement was a compliment.

I never told my parents about these incidents. I felt too ashamed to admit, even to them, that I would never look like my peers. I constantly thought to myself, “I’m just like you guys. I have no memory of ever being in China. I have lived here all of my life, so why am I labeled a foreigner?” I couldn’t understand how being born in a different place could so drastically set me apart from everyone else.

From then on, I did everything I could to conceal my Chinese heritage. Throughout high school, I dyed my hair, and carefully avoided drawing any attention to where I was from.

“You’re a 'white Asian,' my friends would say, referring to the fact that I had white parents, didn’t speak Chinese, and never talked about my culture. They made it clear that their statement was a compliment. I’d smile and laugh, brushing it off. I was finally getting what I'd always wanted — the approval of my friends. I was no longer seen as the token Asian. So why did I feel like something was missing?

When I started my freshman year of college at Northwestern University, I was optimistic that I would finally blend into a diverse crowd. But I soon discovered it wasn’t that simple. During welcome week, the school required all new students to attend a diversity workshop. The facilitator introduced a game called “Stand Up.” Essentially, he told us each to stand up if the category he named applied to us. When he said to stand up if you were adopted, I reluctantly got up out of my seat. I looked around the auditorium full of more than 800 of my new classmates — and saw that I was the only one standing. I hadn’t even been at school for a week, and I already felt like an outsider.

But I wanted to belong. As I was registering for classes for the winter quarter of my sophomore year, I found a class that would fulfill my literature requirement, an Asian American Studies class. The topic, which centered on the role of Asian Americans in popular culture, sounded interesting enough, so I went for it.

Unsurprisingly, the majority of the class was comprised of Asian students. I felt more out of place than ever. It was clear that the rest of my Asian peers had firsthand knowledge of various aspects of Asian culture that I didn't, something that became especially clear to me during one lecture on authentic Asian cuisine. As the instructor asked the class to raise their hands if they'd encountered a certain Asian food growing up, just about every hand shot up, except for mine. The class clearly acted as a space where Asian students on campus could feel safe and relate to each other. I envied that.

As I sat watching the other students laugh about their shared experiences, I felt not only left out, but angry. Even in a space where I looked like everyone else, I was still on the outside. It reinforced the feeling I’ve felt my entire life that I am “too white” to belong with the other Asians and “too Asian” to fit in with my white peers. I frequently feel caught between two worlds; the one I was taken out of and the one I was pushed into.

My whole life, I've done everything I could to blend in with my white peers. I dyed my hair brown, dressed like everyone else, and even felt proud that I didn't fit the stereotype of the "typical Asian" that is too often portrayed in the media.

That was, until last year, when I interviewed a professor who studies adopted children’s development for a story for my journalism class. We discussed the insecurities and confusion faced by people like me who are adopted from other countries. By finally internalizing that I was not in fact alone in this feeling, something in me clicked. I realized there are so many other adoptees just like me. We were thrown into this world without a clue of how to balance our two identities. I’m slowly discovering that although this may be a challenge, it isn’t necessarily a bad thing. I received the gift of not one but two cultures that I can embrace.

I continue to navigate the process of establishing and discovering my own identity, while fielding questions about why my birth parents couldn’t keep me, or why my last name isn’t “Asian-sounding.” But the difference is that now I’ve learned to respond with pride. I don’t have to completely understand Chinese culture, nor do I have to completely leave it behind. I have a whole lifetime to discover who I am in relation to my two cultures. My mom is right. I’m meant to be here.