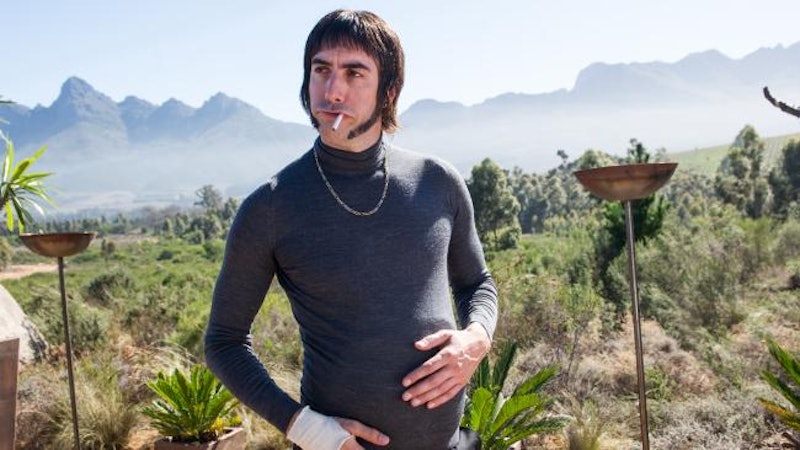 Sacha Baron Cohen is known for raunchy, gross-out humor. This is the guy who engaged in a naked wrestling match in Borat, who featured a talking penis hole in Bruno, and who cut off a dead man's head at the man's funeral in The Dictator. The comedian tries to outdo himself with the level of inappropriateness in each new film he produces, and his newest effort, The Brothers Grimsby , is his raunchiest yet. The film features a handicapped, AIDS-infected child being shot, an extended testicle-sucking scene, and a lengthy and graphic discussion of a turd, but one scene in particular blows the rest away: The Brothers Grimsby 's elephant scene.

Having seen the movie, I can say this with confidence: I've never seen a more revolting or extreme scene in any movie, ever. It's ridiculous, and way more graphic than what you're expecting. Baron Cohen recently brought the clip, by far the most inappropriate in the movie, to Jimmy Kimmel Live! Kimmel informed his guest that the scene obviously could not be shown on television, so instead, they showed it to the audience and filmed their reaction. They reacted with a mix of groans, screams, and laughter, and they definitely did not overdo it. Everyone who sees the movie is going to be talking about this scene.

So what happens in the scene? Well, early on in the film, Nobby's (Baron Cohen's character) children are watching a nature program on TV about the mating habits of elephants, and there's a reference to how large an elephant's uterus is. This comes into play later, when Nobby and his brother Sebastian are on the run in Africa and they need a place to hide. They're in an open field surrounded by elephants, with seemingly no cover, when Nobby gets an idea. The two then climb into the elephant's vagina, which looks surprisingly realistic. The action then shifts to the inside of the uterus, where the brothers are in gross, sticky quarters. The men looking for them move on, but when Nobby peeks out through the labia to see if the coast is clear, he notices a male elephant approaching, and that's when things go from bad to worse.

The bull elephant starts having sex with the elephant, and the audience is "treated" to the view of this from inside the womb. This involves a massive, way too realistic-looking elephant penis repeatedly ramming Sebastian in the face as he tries to stimulate its shaft, while Nobby fondles its testicles, in order to get the pachyderm to climax more quickly. It works, and the elephant ejaculates all over Sebastian's face. But the nightmare is not over. There is an entire line of elephants waiting to have sex, and the second one essentially has anal sex with Nobby while he's inside the vagina, and finishes by shooting more ejaculate onto Nobby's ass.

So... yeah, it's gross. The scene is easily the most disgusting thing I've ever seen in a movie, but if that's your thing, then you'll love The Brothers Grimsby.

More like this
What Makes A Sally Rooney Sex Scene So Hot?
By Samantha Leach
Shocked Fans & Former Co-Stars React To Ray Liotta’s Death At 67
By Grace Wehniainen
'Stranger Things' Star Joe Keery Is Dating An "Indie Scream Queen"
By S. Atkinson and Grace Wehniainen
Everything To Know About Marvel’s 'Thor: Love And Thunder'
By Grace Wehniainen
Get Even More From Bustle — Sign Up For The Newsletter