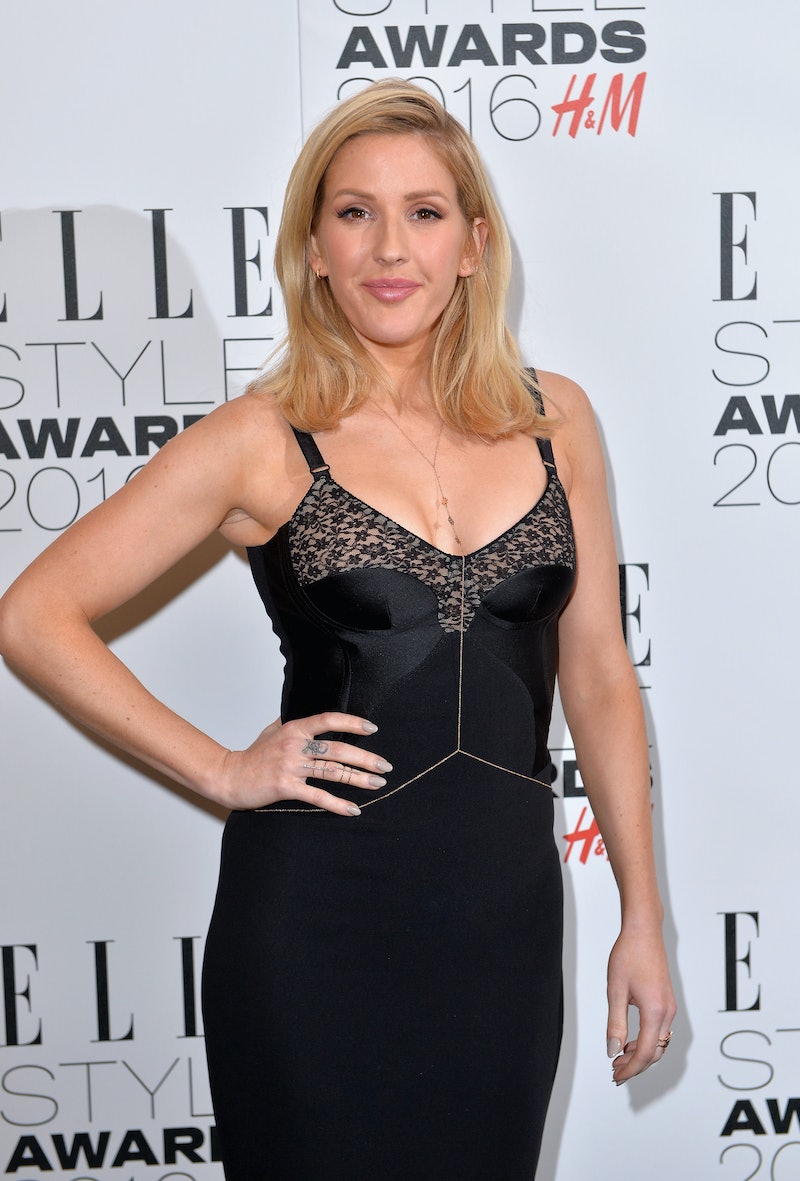 In the April issue of Seventeen magazine, Ellie Goulding talks about her relationships with Niall Horan and Ed Sheeran and sets the record straight. But what she doesn't mention is the Ed Sheeran's song "Don't," which is heavily rumored to be about a love triangle between Sheeran, Goulding and Horan. Maybe it's because I have a strong affinity for Sheeran's X album and an obsessive interest in the stories behind pop songs, but "Don't" seems to be the elephant in the room here. It's the catalyst for all of these rumors in the first place, and it needs to be addressed.

First, let's look at what Goulding had to say about her relationships with the other musicians:

"We're still friends," she said of her relationship with Niall Horan. "We went on a few dates, and it was really fun. He's a really, really lovely guy. He's got the biggest sense of humor, he's very caring, and I see him as a genuine friend in the industry."

As for Sheeran — and the rumor that her addictive track "On My Mind" is about him — she said, "We've known each other for a few years. I think he's a really nice guy and a brilliant musician. We've bumped into each other and we've hung out and stuff, but the thing is if I hang out with someone, it's instantly like I'm 'dating' them. We were never in a relationship. My song is not about him."

While Goulding is adamant that she was never in a relationship with Sheeran, it seems like she's choosing her words carefully here. After all, there is literal video of Sheeran flat-out saying that there was something going on between the two of them, even if that something is being more than "just friends." And let us remember that there is an entire gray area of friends-with-benefits that can exist between more than "just friends" and being in an official relationship.

"I mean, normal people don’t hold hands if they’re just friends," he told radio station Click 98.9 after the two were spotted holding hands at the 2013 VMAs (his response starts around the 5:00 mark). "It was going on. And now it’s not."

To refresh your memory, Sheeran's "Don't" is an angry track in which the redheaded singer recalls how a woman he was seeing for a time slept with someone, a friend of his, who was staying in the same hotel as they were. ("And I never saw him as a threat / Until you disappeared with him to have sex, of course / It's not like we were both on tour / We were staying on the same f*cking hotel floor," Sheeran sings.)

The story in "Don't" is 100 percent true. I could have gotten nastier — there was more sh*t that I didn't put in. I was seeing someone for a bit of time, and then they ended up physically involved with one of my friends in the same hotel that we were staying in, while I was downstairs. And I feel like: Treat people how you want to be treated.

The reasons that people thought Sheeran was singing about Goulding and Horan is obvious. In addition to the fact there had been something going on between them, there are multiple references to the fact that the woman in question is an artist as well ("Me and her we make money the same way / Four cities, two planes, the same day"), as well as the line about how "she was only looking for a lover to burn" ("Burn" is one of Goulding's biggest hits and signature songs). And as for Horan being the other guy, he is a friend of Sheeran's and did go on dates with Goulding after things ended with her and Sheeran — and if the line about "both being on tour" refers to the man, then that means that he is a performer as well.

This all being said, not one member of this supposed love triangle has ever confirmed that "Don't" is about Sheeran, Goulding, and Horan. In fact, even though it seemed like he once confirmed it, Sheeran denied to Entertainment Weekly that he ever let the identities "slip." So it's not like Goulding — who, to be fair, has plenty of other important things to discuss in her career other than her love life — would have exactly broken new ground.

But still, it would have made sense for her to address it when she was clarifying her relationships with Horan and Sheeran — particularly because the rumor is now so embedded in pop culture lore.

More like this
Kanye West Apologizes To Kim K "For Any Stress I Have Caused" In Rare Interview
By Jake Viswanath
Adam Levine Denies Having An Affair — But Admits He “Crossed The Line”
By Jake Viswanath and Radhika Menon
Hailey Bieber Just Responded To *That* Viral Met Gala Moment
By Radhika Menon and Sam Ramsden
Dixie D’Amelio & Noah Beck “Love Each Other” Despite Breakup Rumors
By Julia Emmanuele, Jordyn Tilchen and Grace Wehniainen
Get Even More From Bustle — Sign Up For The Newsletter