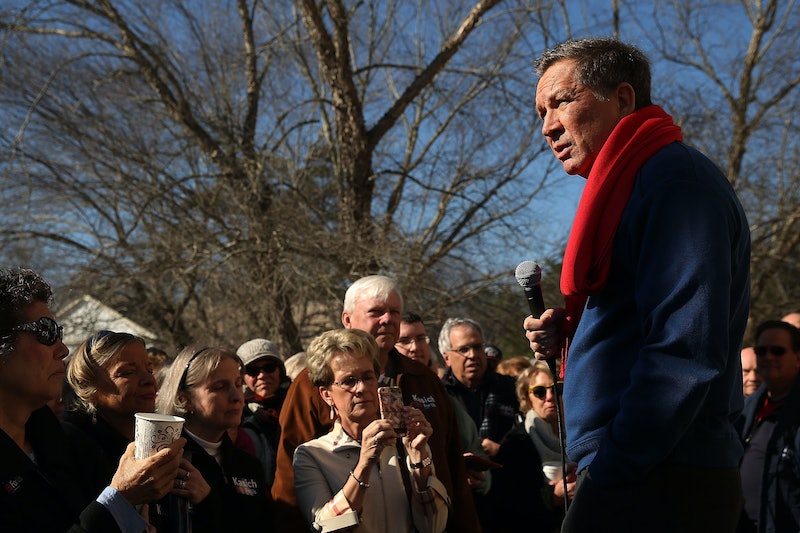 Super Tuesday and its not-as-important sibling Super Tuesday 2 have come and gone, but the several primary elections scheduled to take place on March 15 could very well be the most consequential of them all for several candidates still in the running for the White House. Democratic candidate Bernie Sanders is hoping to see the momentum from a victory in Michigan carry through to states such as Ohio and Florida. Trailing GOP candidate John Kasich expects to do a clean sweep in Ohio, his home state. Donald Trump sees no other result other than winning just about everywhere. So in the Buckeye State, there's a lot at stake for candidates all around — but is the Ohio primary winner take all?

The first step to understanding the type of primary going down in Ohio is clarifying which party you're talking about, because it differs for Democrats and Republicans.

For the Democratic candidates, delegate votes will be awarded on a proportional basis in accordance with the state's popular vote. This will likely prove to be decent news for both Sanders and Hillary Clinton, as suggested by Michigan's primary. Sanders was able to pull off an upset victory in the Great Lakes State, but because it was a proportional primary, both candidates took home roughly the same number of delegates. And with recent polling projecting Ohio to produce a similarly close race, the two will still have the opportunity to grab a good portion of the 143 delegate votes available in the primary.

On the GOP side, the primary is winner-take-all. It's important to note that this is an opportunity that doesn't come often for candidates during primary season. The state doesn't offer the largest number of delegates by any means — the Republican victor will get an additional 66 delegates from Ohio — but it's kind of a big deal, since the other candidates are left with zilch.

As mentioned above, Kasich is banking on Ohio residents voting for their governor. And if he succeeds in pulling off a victory there (though only one of the recent polls taken projects that Kasich will actually win), he could provide some assurance for supporters questioning whether he still has any chance of making it to the party's convention.

If Trump ends up taking the Buckeye State, as several polls project, the GOP frontrunner will be adding to the pile of evidence indicating that he should be their only runner.