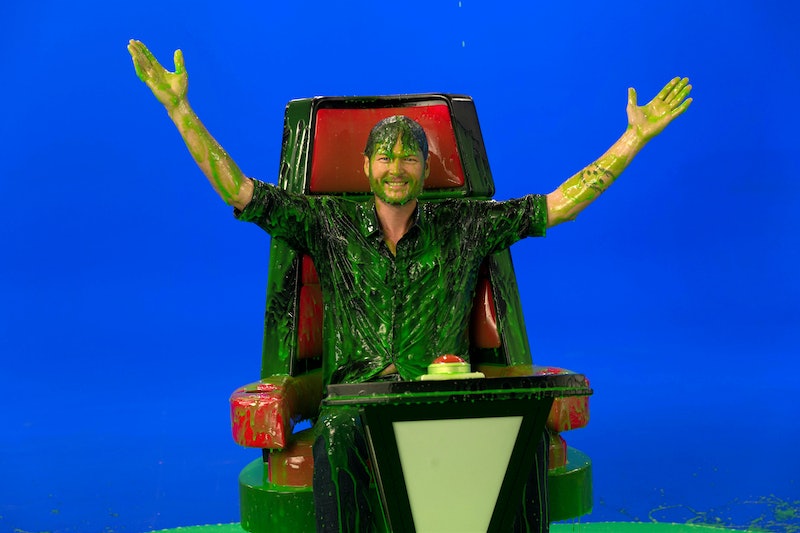 Like most Nickelodeon-loving children, I was very into the Kids' Choice Awards when I was, well, a kid. And I wasn't just a casual viewer of the annual awards show. Oh no. If, for some reason, I wasn't going to be home or wasn't able to watch the Kids' Choice Awards, I would always have my parents record it for me on a VHS tape to watch it later at my leisure. But thankfully, technology has progressed quite a bit since the late '90s and early 2000s, so much so that if you find yourself wanting to check out this year's Nick awards show but don't have cable or need to watch it on the go, you might be wondering how to stream the 2016 Kids' Choice Awards online.

Luckily, you don't have to run off and ask your parents for the answer, because I'm going to fill you in below. Before you think it's going to be too much trouble to live stream the Kids' Choice Awards and give up completely, let me just remind you on what you'd be missing out on.

For starters, Blake Shelton will be serving as host of this year's awards show. Not only is he a delightful human being to watch on TV, but his presence might also mean we get to see more of him with Gwen Stefani, and I am all about that.

Whether or not that does end up happening, there are plenty of celebrity appearances that have already been confirmed. Robert Downey Jr., Amy Poehler, Chris Evans, Ellen DeGeneres, and more are slated to appear at the Kids' Choice Awards, E! News reports. The show will also feature performances by DNCE, Wiz Khalifa with Charlie Puth, and Silento.

All of that should be enough to convince you to park it right in front of your TV on Saturday, March 12 at 8 p.m. ET to make sure you catch all of the action as it happens live. But if that's not possible, here are your options for catching this year's Kids' Choice Awards show live or later:

Keep Your Fingers Crossed For A Free Live Stream

The 2015 Kids' Choice Awards had a live stream, but Nickeledeon hasn't announced whether or not it'll do the same for this year's awards show. All we can do now is hope that the network does make a free live stream available on its website like it did last year because that would really solve all of our problems.

Interact With The Nick App

Nick's mobile app, which is available to download for free on iOS and Android devices, doesn't feature live streaming, but it does include a lot of Kids' Choice Awards-related content. Not only did the app allow you to vote for the winners of the Kids' Choice Awards, but it will also enable you "to choose what happens LIVE at the big show right here from the Nick app," according to its description. The app is also "your go-to destination for videos, pics, and more live from the Orange Carpet at all of our events including the Kids' Choice Awards and Kids' Choice Sports." It sounds like you'll be able to use the app to enhance your viewing of the awards show that you're able to watch elsewhere or it could be a way to catch at least some part of the show in case you can't have the full TV experience.

Have Your Cable Log-In Handy

Worse comes to worst, you can always live stream the Kids' Choice Awards from a cable TV provider, many of which offer the option of watching TV live from a computer or mobile device. Of course, then you'll need a cable log-in to access the live TV online, so this isn't an option for everyone. Still, I just thought you should know.

Luckily, in today's world, if you can't watch something live, you can usually catch it again later on. This is an option for those that have access to cable, but they just can't watch the Kids' Choice Awards live. If you have a DVR, do yourself a favor and just record the awards show and watch it later. That's what DVRs are for, after all. If not, the 2016 Kids' Choice Awards are scheduled to air again on Saturday, March 12 at 10 p.m. ET and Sunday, March 13 at 12 p.m. ET, so you can see the show in all its glory during those times, too.

And if you still have a VCR and a blank VHS handy, you can always just tape the Kids' Choice Awards like I used to do back in the day. It's an oldie but a goodie.

More like this
Kourtney & Travis Crashed His Daughter’s TikTok Live In Their 2nd Wedding Outfits
By Grace Wehniainen
Twitter Is Upset About The 'American Idol' Top 3 Results: "Who TF Is Voting?"
By Jake Viswanath
How 2 'American Idol' Singers Performed With COVID-19 & Made It Into The Top 5
By Jake Viswanath
'Bosch: Legacy 'Is Bringing Its Beloved Main Character Back
By Kadin Burnett
Get Even More From Bustle — Sign Up For The Newsletter