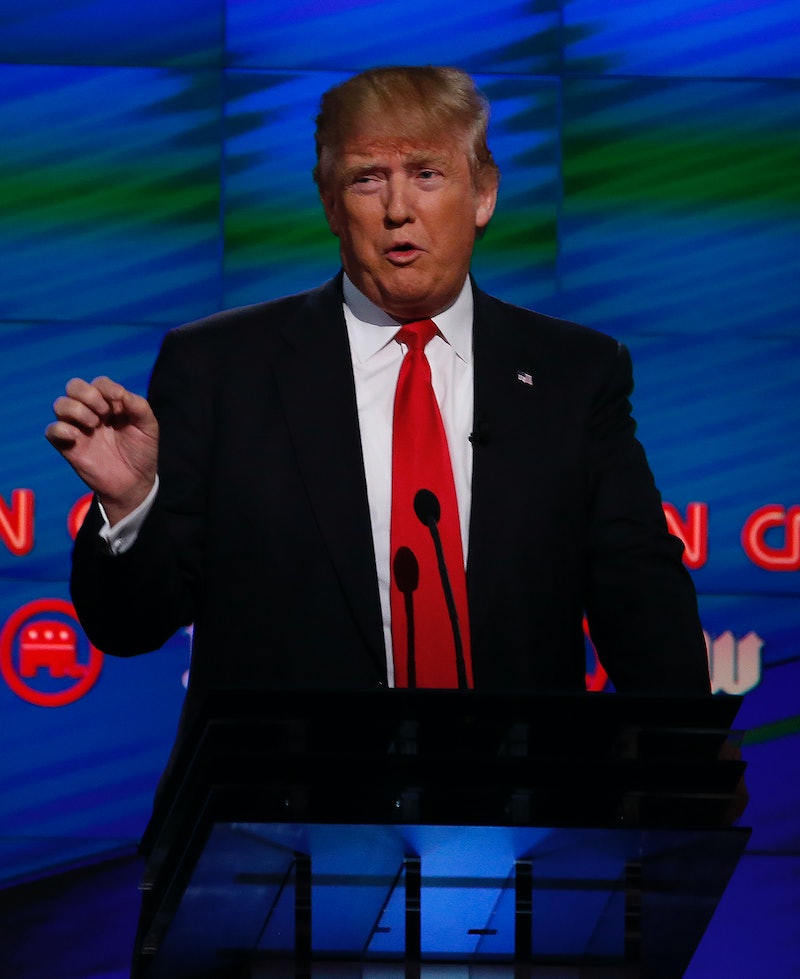 On Thursday night, the Republican presidential candidates squared off in their final debate of the 2016 primary season, aired on CNN straight from the University of Miami. Just like the Democratic debate one night prior, the location was very appropriate — the crucial winner-take-all Florida primary is just days away, on Tuesday, March 15. In other words, this was both sets of candidates' last chance to sell themselves to Republican primary voters. And when it was all said and done, the winner of the last GOP debate probably just punched his ticket to the nomination in July.

Obviously, it's not always easy to get a handle on who won and who lost in one of these debates, since they're so far from, well, real debates. In short, these things haven't exactly been hard-hitting, deep digs into the issues and conundrums facing the American electorate, so much as boisterous verbal wrestling matches. This is partly owed to the fact that they're not trying to win factual arguments so much as drive voter turnout in their favor, and maybe slide a knife into the back of one of their rivals in the process. Metaphorically speaking, of course.

So, who carried the night? You may not like it ― hell, the Republican establishment and scores of even-keeled conservatives throughout America positively hate it ― but if you're wondering whose prospects look rosiest heading out of Thursday night, Donald J. Trump is your man.

Why, you ask? Because there's a very simple reality about presidential debates that too often goes overlooked — namely, it's unclear to what extent they can really influence voter behavior. As such, the safest bet for who "won" a debate like this is who comes out of the most unscathed, and who was in the best position to begin with.

On that last point, there's no denying that Trump takes the cake, as he's currently up big in the polls heading into Florida, leading by nearly 15 points on average (although he has historically under-performed his polls numbers, so maybe there's hope). Conversely, if you're lagging behind by wide margins, and already facing an insurmountable delegate deficit — looking at you, Marco Rubio — it's a mighty steep hill to climb.

Which is precisely why it it made sense all along that there were only two real contenders to win this debate — months-long front-runner Donald Trump, or his closest runner-up, Ted Cruz. And Cruz basically gave up the game with a very passive performance, sticking to many of the same canned lines, weak jabs, and offhand retorts he's been making in, well, all of the prior Republican debates.

Rubio was no better ― his very first chance to speak, he defaulted right back to his same tired spiel, which is actually perhaps the single truest "Robot Rubio" experience of the campaign. You know the one ― when his voice rises with forced passion and sincerity as the words "new American century" strain from his lips. He did mix it up with Trump in one exchange on Cuba, and acquitted himself quite well on a subject that could loom large for Cuban ex-pats in Florida, but across the board, he just was docile and unwilling to mount a fight as the others.

If anybody could've benefited from the laid-back style, you'd have to think it'd be John Kasich. But let's be real: he's out of the running in Florida, and won't have a chance of winning a state until Ohio heads to the polls. The jury is out, in other words, and even if he wins his home state, the path forward is unclear.

Basically, after weeks of bluster, contention, and jockeying for position, the Republican Party's three remaining non-Trump candidates effectively dropped to one knee and handed Trump his above-the-fray, respectable-seeming moment on Thursday night, at least as respectable as you can seem with virtually no concrete policy positions or knowledge on display. The only question now is whether Republican primary voters will be as supplicating.