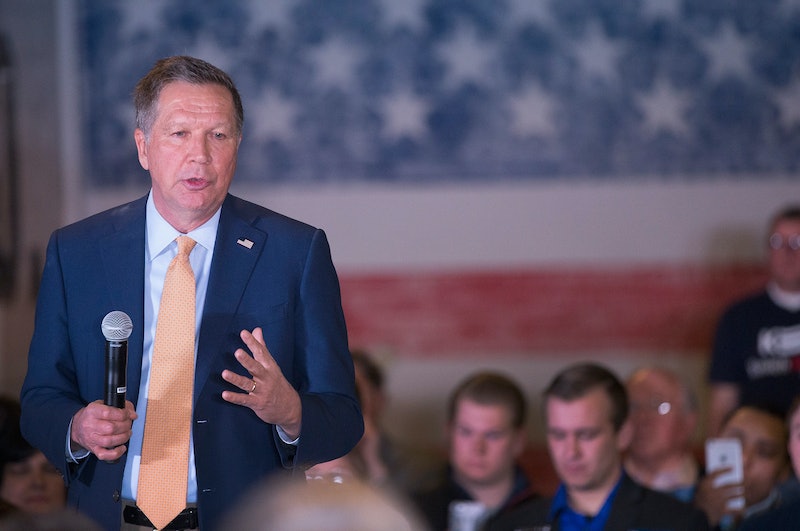 Very soon, John Kasich will get the primary that he's been waiting for: Ohio. The state, of which Kasich is governor, will vote on Tuesday in what is set to be the third installment of "Super Tuesday" elections in states across the country. Ahead of the Ohio primary, and the others that will take place on or before that day, Kasich gave a "positive" closing statement at Thursday's GOP debate in Miami.

I have run an unwavering positive campaign for president of the United States.

During the debate, Kasich remained his steadfast self, staying away from the flimsy personal attacks that have dragged his opponents through the weeds. He gave strong responses to questions about education and foreign policy, and he called on his track record as governor of Ohio to set him apart from the three other men on stage.

Despite being in Florida for the debate, Kasich even mentioned Ohio by name, making it clear that he was ready for the Buckeye State's support. He called on his beloved Buckeyes to rally for him at the polls on Tuesday. Should he win there, as he's expected to, the Ohio primary couldn't come at a more welcome time for Kasich's campaign. On Tuesday, he made a strong showing in Michigan's Republican primary: He finished third, but less than one percentage point separated him from second-place Ted Cruz.

As he has done before, Kasich focused his closing statement less on his specific policy recommendations and more on the overarching spirit that he hoped to convey with his campaign. He emphasized that he was committed to running a positive, anti-attack campaign. "I wanted to raise the bar in presidential politics," he said.

Kasich has emphasized his clean campaign a lot lately, which probably means that he's trying to stand out from the attack-heavy campaigns of his opponents. That messaging seemed to work well for him in the GOP debate that took place a week before, also on Thursday. At that event, sophomoric banter dominated the conversation, with Donald Trump alluding to the size of his you-know-what and Cruz telling Trump to calm down.

This Thursday's debate, the last scheduled debate for the Republican candidates, was much more peaceful and mature. Yet Kasich still tried to remain the voice of reason. He talked about the issues, answering hard-hitting questions from CNN's Jake Tapper, all throughout the night, but his closing statement seemed to focus more on his character.