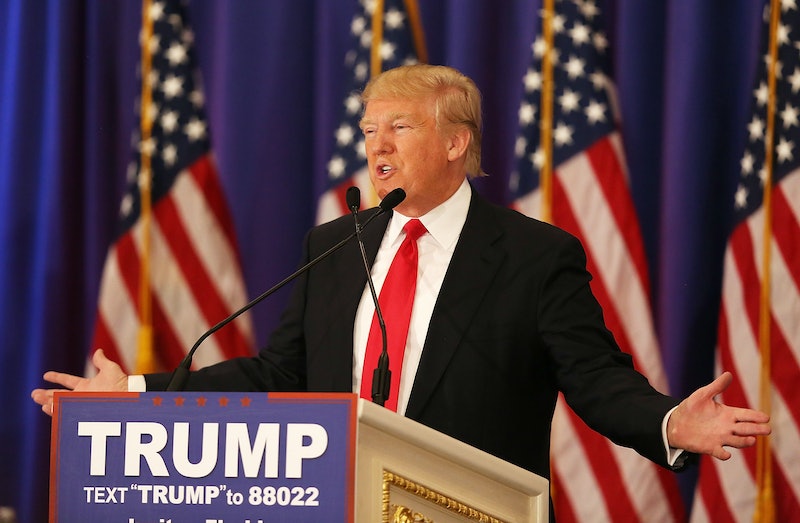 It's one of the great unanswered questions of the presidential campaign season, something that anybody concerned about the possible election of Donald J. Trump — or, god forbid, planning to vote for the guy — should have on their mind right now. Namely: Who would be in a Donald Trump administration? Well, luckily, the man himself dropped at least one hint during the final Republican presidential primary debate in Florida on Thursday night, and it's a name you've probably heard before: Ben Carson.

It happened while Trump was answering a question about his opposition to the Common Core education initiative, and he decided to name-drop Carson, who'll reportedly endorse his candidacy on Friday. And what Trump specifically said about Carson makes it seem pretty feasible that you could see the notoriously sleepy-eyed retired neurosurgeon serving in a Trump administration someday, if the American people choose to vote him in. Specifically, Trump said that he'd want Carson's expertise on education. In other words, assuming that Trump's affinity for Carson is genuine and not just a front — remember, this is the same guy he accused of lying about his life's story, and (no joke) compared him to a child molester — there's a very real possibility that you could see Secretary of Education Ben Carson someday.

Trump also teased Carson's widely expected endorsement, telling the assembled debate crowd it'd be coming on Friday morning. It's a surprising partnership, to be sure, and not just because Trump made such inflammatory comments about his former primary rival (he also knocked Carson for being a Seventh-day Adventist), but also because civil political discourse was kind of Carson's defining issue towards the end of his run. In fact, just before he announced he was dropping out of the race, he called on his GOP rivals to hold a meeting about the lack of civility in the race, a call that was not heeded.

As for who else might join a Trump administration, well, it's pretty hard to say. Trump's always talking up businessman Carl Ichan, and has previously suggested he might put him in charge of dealing with China, or offer him a position as Treasury Secretary. Beyond that, your best bet is probably to take a look at the slim portfolio of elected Republican office-holders who have actually endorsed Trump's candidacy, because that'll be a strong list of people he could tab in a potential administration. Names like Chris Christie and senator Jeff Sessions, for example, as well as whatever other endorsement he racks up in the weeks to come — he has also drawn some praise and support from former GOP candidate Mike Huckabee.