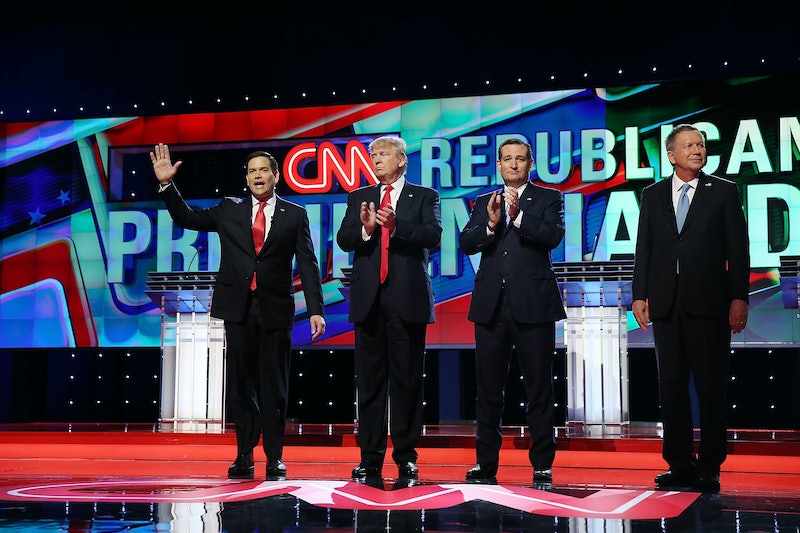 To the shock of Democrats and Republicans alike, the last Republican primary debate opened not with Donald Trump bragging about his penis, but — hold on to your seats, folks — a substantive discussion of policy issues. Trade, immigration, Common Core, Social Security, and guest worker programs were among the topics discussed in the first half hour of the forum, which was a significant contrast to the insult-filled shouting fests that preceded it. And how did viewers react to CNN's GOP debate? By collectively shouting, "I'm bored!"

"I can't believe how civil it is up here," Trump said about 30 minutes into the debate. And he was right. Aside from some very mild criticisms levied by Trump and Ted Cruz, the first hour of the debate passed with no harsh or personal attacks between the candidates. Instead, they talked about policy, and it conspicuously seemed as if everyone on stage was doing everything in their power to prevent the last Republican primary debate of 2016 from becoming as embarrassing as the rest of them.

CNN certainly deserves some credit for this, since they were the ones asking the questions. Still, dry policy discussion ain't exactly a winning formula for TV ratings, and viewers quickly turned on the debate for being too much like, um, an actual debate.

In all likelihood, the Republicans on stage were intentionally trying to make this forum more mature and adult-seeming than the last. They recognize that the general election isn't actually that far away, and that more debates with name-calling and body part-comparing won't help paint the GOP in a positive light in the minds of swing voters.

Whether this will work so late in the game is another question entirely, though, because there's still a whole lot of footage of Republicans acting like children on these debate stages. Like this, for example.

People may have short memories in politics. But it seems unlikely that a single debate full of sober-minded policy details will be able to cancel out nine months of demagoguery and petulance. Voters aren't quite that forgetful.