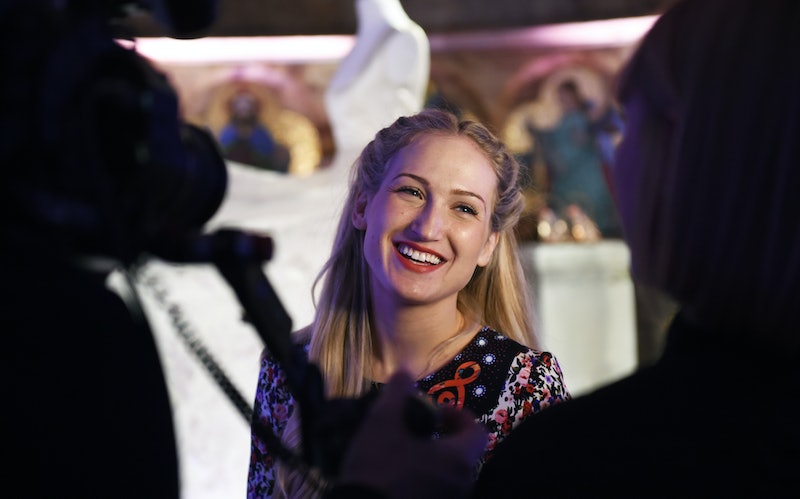 Sophia Webster is not only a killer clothing and shoe designer, but an incubator of imagination, too, as evident by her cooky, playful, and super cool designs. And now, she does it again — Sophia Webster's handbag line, which is her first, by the way, might just be the cutest, most maritime line of bags we've ever seen. And we're in love.

You may know Webster from her shoe collaboration with J.Crew. The collab featured an array of contrasting patterns, different hues, and fun embellishments. If I were ever to enter a shoe heaven, it would be this collaboration. So it comes as no surprise that Webster's first handbag collection is something I've never seen before.

One of the things I love about Webster's designs is how youthful it all feels. In New York City, where I'm constantly surrounded by neutrals (mainly, blacks and nudes), it's so refreshing and fun to see this type of color pop. She definitely isn't afraid to tackle prints head on, and I respect the hell out of that. And — In addition to starting her handbag line, Webster is opening her first standalone shop, according to WWD.

While Webster actually did dabble in bags in the past, this is the first time she's focused on actual purses rather than exclusively clutches, according to Racked. And as a first timer, I've got to say, she's totally nailed it. Even if you're not one for playful pants, you have to appreciate how quirky they are.

They really do take your breath away — From the coral-inspired straps, to the wave-like print, to smooching Flamingos — this was the super cute, yet wearable handbag collection I've been waiting for. And luckily for me (and you), her collection is launching in spring, and will be available at stores like Selfridges and Saks Fifth Avenue, according to Racked.

"The bags come in five styles: a bucket bag dubbed the Romy; the Claudie, a cross-body bag; the Izzy, a tote; plus a minaudière and envelope-shaped clutch, both of which are unnamed. There is also one of her word bubble clutches remade to fit the marine theme. The bags will range in price from $426 to $994," Racked reports.

What an exciting time for Webster, whose first store will open in April in London. It's safe to say she's killing the game.

More like this
14 Spicy Bralette Outfits For Vaxed Girl Summer, Round 2
By Avery Matera
Fashion Trends From 2002 Making A Comeback
By Avery Matera
Charli XCX’s Depop Collaboration Is A Spice Girl Fan's Dream
By El Hunt
These Are The UK's 10 Most Searched For Black Haircare Products Of 2022
By Tomi Otekunrin
Get Even More From Bustle — Sign Up For The Newsletter