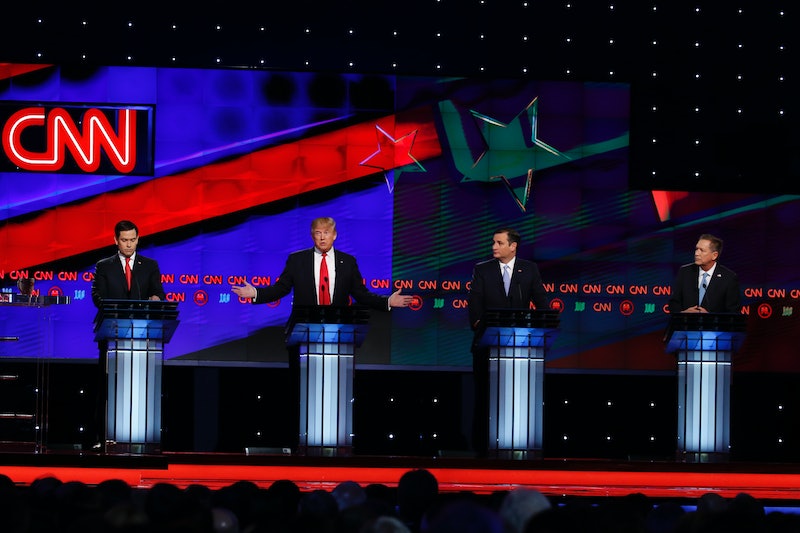 On Thursday, the four remaining candidates for the Republican presidential nomination battled it out on stage in what could have been the last GOP debate of 2016. (Cue sigh of relief.) The much narrower field of candidates covered everything from education and immigration to social security and foreign policy, and they managed to do so in perhaps the most civil debate yet. The civility seemed good for fostering a substantive conversation about important issues, but it didn't quite do the outrageous GOP debate moments from the past several months any justice.

Believe it or not, there have been a whopping 12 Republican debates during this election season, counting Thursday night's event in Miami. The first debate took place in Cleveland, Ohio, all the way back in August. Yes, that means you've been hearing about the GOP debates for more than six months. You'll probably stop hearing about them soon, though, as Thursday marked the last scheduled event on the calendar created by the Republican National Committee at the start of the season. There's been talk of adding a debate in Salt Lake City, Utah, later in March, but that event has not been confirmed. With Thursday's uncharacteristically civil debate in Miami, the GOP candidates went out without a bang, but there was no shortage of bangs throughout the debate schedule as a whole.

What better place to start than at the beginning? At the start of the first GOP debate in August, moderator and Fox News anchor Megyn Kelly asked businessman Donald Trump a question about his relationship with women. Trump took offense to the question and used his response as an opportunity to poke his longtime feud with Rosie O'Donnell. So began the feud between Trump and Kelly, which would eventually lead Trump to boycott a debate in Iowa.

Proving that Kelly was right to question his respect of women, Trump seemed to attack former Hewlett-Packard CEO and one-time candidate Carly Fiorina's looks, asking, "Why would anyone vote for that?" in reference to her face. The quote came out in a Rolling Stone article, but Fiorina had the ultimate comeback on primetime television at the second GOP debate. When asked to respond to Trump's comment, Fiorina refrained, saying, "I think women all over this country heard very clearly what Mr. Trump said." It's no surprise, really, that Fiorina has since chosen to endorse Texas Sen. Ted Cruz over Trump.

Former Florida Gov. Jeb Bush admitted during the second GOP debate in September that he smoked weed while he was a student 40 years ago. He also worried that his mom would be mad at him for telling the millions of people watching the debate. All in all, it was definitely a high point in Bush's debate performances, which Trump called "low energy."

At a much more recent debate in February, retired neurosurgeon and then-candidate Ben Carson missed his cue to take the stage. He ended up waiting, very literally, in the wings for someone to call his name. Meanwhile, the other candidates walked around him as they made their way to the stage. Carson has said that it wasn't planned, but intentional or not, the mix-up definitely made for an awkward visual before the start of an important debate.

Last week, Trump responded to a claim that Rubio made during a campaign rally, saying that Trump has small hands... and you know what that means. Trump does know what that means, and he felt the need to let debate viewers know that his hands — and his other body parts — are not too small. At this point, the Republican National Committee was probably wondering why it didn't just quit while it was ahead.

As the GOP's debate schedule winds down in a big way, viewers finally have a chance to reflect on the last six months. What they'll remember probably isn't Thursday's debate in Miami, but rather the chaotic moments on stage throughout the election season. Still, let's be appreciative of the restraint that the remaining candidates showed on Thursday, even if it took the entire debate cycle to get there.