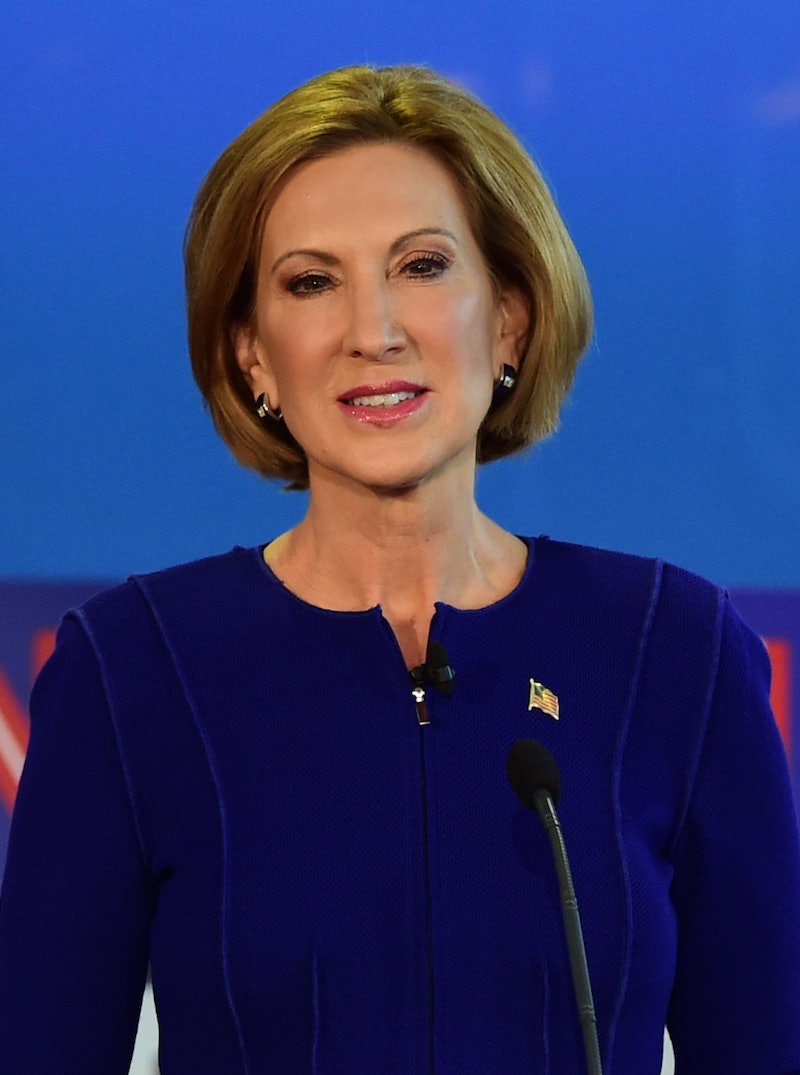 Well, we made it! Another Republican presidential debate has come and gone. And this time, we got to stare at Ronald Reagan's old Air Force One the whole time. It was every bit the spectacle you'd expect. Trump, Carson, Bush and the whole rest of the gang were there for a little verbal sparring — and as always, the different campaigns are engaging in different levels of spin to try to cast their candidate as the winner. But who actually brought this thing home? Simply put, the real winner of the GOP debate was Carly Fiorina, and here's why.

Wednesday night's debate aired on CNN and was broadcast from the Reagan Presidential Library — hence the aforementioned appearance of his presidential plane in the background. It played host to 11 candidates: Trump, Bush, Carson, Walker, Paul, Rubio, Huckabee, Fiorina, Cruz, Kasich, and Christie. The four candidates who couldn't crack the polling average threshold to get in (Santorum, Graham, Pataki, and Jindal) participated in an undercard debates earlier in the day. This has been somewhat derisively called the "kids' table." But hey, do we really care so much about those guys right now?

Obviously, it's tricky to pick winners and losers in these things, because modern American political debates have veered so far away from "the best argument wins." Instead, countless factors weigh into it: your appearance, your body language, your tone, your sense of authority, your expertise, and your composure when facing down an attacking rival.

But taking everything into consideration, the winner of this thing was clearly Fiorina. She confidently engaged on a variety of issues, from foreign policy to military policy to her own professional record to the remarkably misogynist attacks that have been leveled at her by frontrunner Donald Trump since the last debate.

The latter point was undoubtedly the moment that will be most remembered, because it's such a rare sight for a GOP debate: A candidate unflinchingly accusing another candidate of sexism, even if somewhat implicitly. Suffice to say that the GOP is not quite as friendly a party to these conversations as the Democrats are. As such, there was some measure of risk in Fiorina challenging Trump about it. But the issue was teed up perfectly for her by moderator Jake Tapper, and she hit a grand slam, eliciting big cheers from the crowd.

She also drew out a thoroughly uncomfortable, off-balance reply from Trump. It wasn't an apology — he never apologizes — but rather, it was an attempt at a make-good compliment that was positively cringe-inducing: "I think she's got a beautiful face, and I think she's a beautiful woman." Fiorina did not look particularly moved.

Make no mistake: If you're a progressive-minded person, there are issues you had with Fiorina's arguments. Her incredibly damning rhetoric against Planned Parenthood definitely stuck out. But Fiorina isn't playing to a left-wing audience in any sense — she's trying to win the adoration of the Republican base. And in that regard, her hardline conservative stances had real resonance.