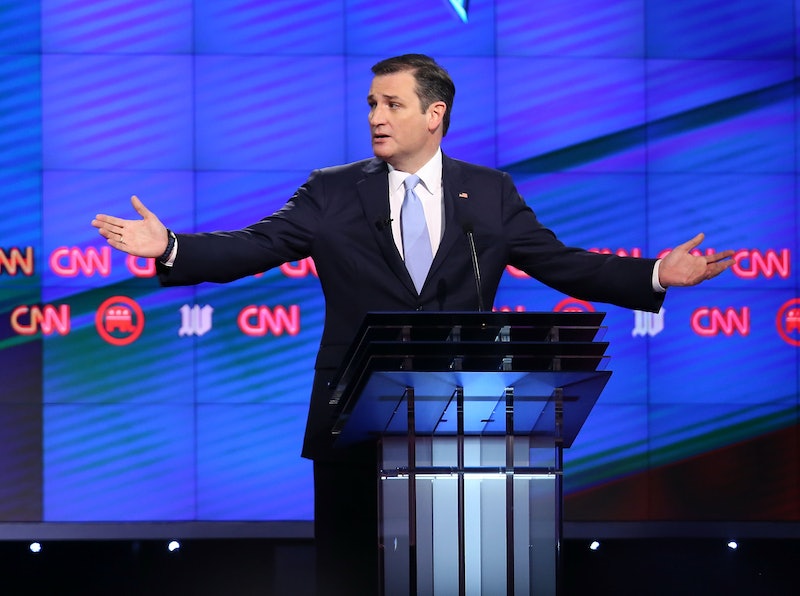 At the 12th and final Republican debate, Ted Cruz subtly attacked Donald Trump during his closing statements of the night. Really, it was more of a troll than an attack, and I have to admit: It was a pretty good troll.

But the jab loses some of its steam in written form. When Cruz said "son of a bartender," he motioned toward Marco Rubio. When he said "son of a mailman," he gestured at John Kasich. Cruz humbly placed his hand on his own chest after referring to "the son of a dishwasher." And of course, he motioned at Trump when he said "successful businessman." Somehow, Cruz kept a straight face when he did this.

The audience understood exactly what he was doing, though, and they laughed in kind. It wasn't a huge laugh, but it was enough to indicate that they knew what Cruz was doing. The junior senator from Texas was, of course, drawing attention to the fact that all of the candidates on stage had come from humble beginnings... except for Trump. To be even more specific, Cruz was drawing attention to the fact that Trump, unlike the rest of the GOP field, inherited loads of wealth and privilege from his father, which undercuts his key appeal as a self-made businessman.

This was a clever troll for two reasons. One, it masqueraded as a compliment — Cruz was ostensibly praising Trump's roots as part of what makes America "an incredible nation." Second, and most importantly, he said it right before Trump's closing statements, which gave Trump one of two options: Either respond to the attack, and use his final moments of the debate talking about how great his dad is, or let the attack go without a response, which is something Trump absolutely hates doing.

Somehow, the Donald chose the second option, and used his closing comments to appeal directly to the #NeverTrump crowd instead. But you could see the grimace on his face as he bit his tongue — and you could almost hear Ted Cruz smirking to himself from the other side of the stage.