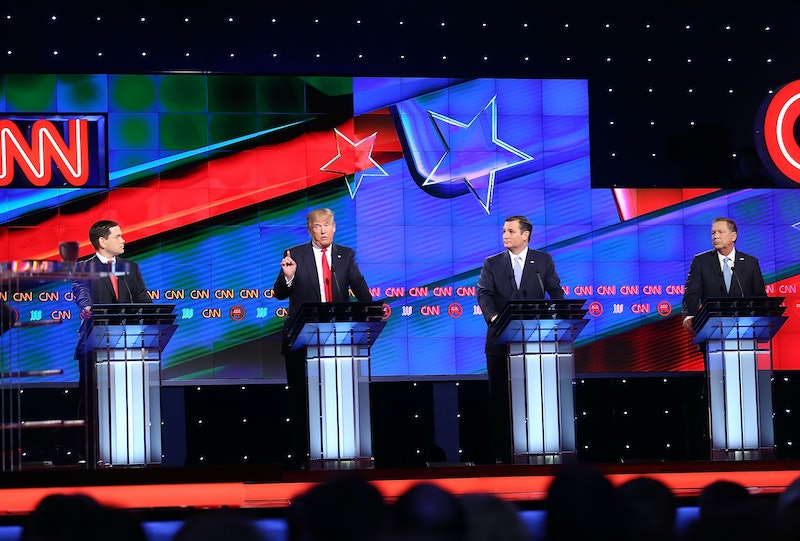 Well, that's a wrap, folks. The 12th and final debate of the Republican presidential primary season ― indeed, the last primary debate for either party ― is at an end, and boy, was it not what you might have expected. While the previous few showdowns have been bitter, contentious, nasty, and combative, Thursday night's offering, just days out from the Florida primary, was altogether different. Softer, calmer, decidedly more restrained. And in that approach, the anti-Trump candidates looked like they'd thrown in their towels: Marco Rubio, Ted Cruz, and John Kasich failed to halt Donald Trump's rolling momentum in the final GOP debate.

It was obvious from the very start that things were different, and that was thanks to a distinctly new tone on Trump's part. With one fire-breathing debate after another already on his track record, Trump made a clear, conscious choice to smooth things over and cool things down, speaking in a lower, calmer voice, and spending less time hectoring and taunting his rivals than defending and lauding his own (paper thin) policy proposals.

And whether it was simply in-keeping with the strategies the other candidates had going in, or whether it helped de-fang them to some extent, this approach was pervasive ― save for a brief scuffle between Trump and Rubio on the subject of Cuba, there was precious little heat or hostility to be seen.

In particular, there was one moment that was perfectly served up for all three of Trump's rivals to pounce, and perilously little was made of it. Moderator Jake Tapper questioned Trump about the disturbing incidents of violence that have been erupting at some of his campaign events and rallies. There have also been recent allegations that Breitbart reporter Michelle Fields was manhandled by Trump campaign manager Corey Lewandowski following the candidate's victory presser on Saturday, but that went unmentioned.

This isn't some kind of new phenomenon, and Trump can't credibly claim he has no involvement. In truth, he's made several statements supportive of doling out violence against protesters during his rallies, which Tapper specifically read back to him to hold his feet to the fire. But when the speaking time rolled around to Cruz, Rubio, and Kasich, the weakness of the replies spoke volumes.

Cruz avoided making any direct criticism of Trump, pivoting into an attack on President Obama. Rubio followed suit, speaking only generally of violence in society before pivoting into a paean to American police. Kasich fared no better. It was, in short, a microcosm of the entire debate ― Cruz, Rubio, and Kasich drifting through their last opportunity to confront Trump on a nationally televised stage, and barely even trying.

It'd be kind of funny, if it weren't also so sad. And, as it makes the prospect of President Trump even just slightly more likely, frightening too. In any case, after Tuesday, the story going forward will look a whole lot clearer ― that's when the people of Florida will head to the polls.