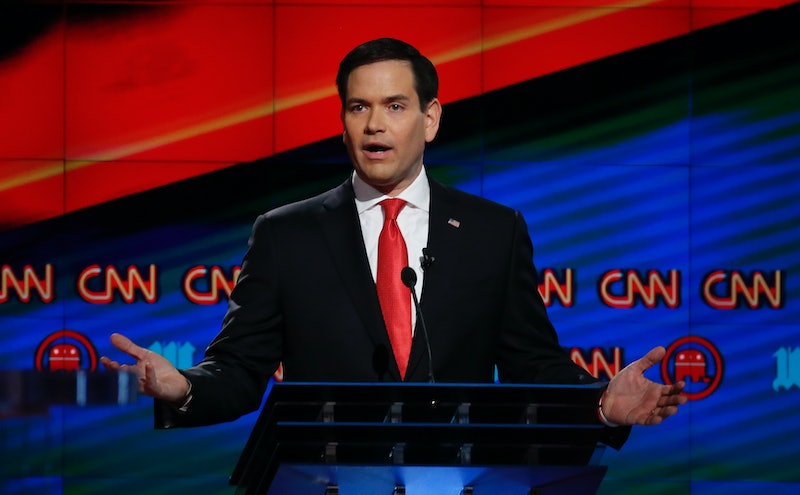 The final GOP debate of the primary season took place at the University of Miami on Thursday. The event was no bigger a proving ground for any remaining candidate than for Florida Sen. Marco Rubio, who is desperately doing everything in his power to ensure a win in his home state. Rubio's dismal poll numbers and apparent lack of support have made it all but mathematically impossible for him to nab the Republican presidential nomination. The candidate's Thursday night performance sadly did little to bolster his profile. Frequently, Rubio appeared tongue-tied and nervous, obscuring a rather strong message and detrimentally taking away from the substantial knowledge he displayed in answering questions about the H1B visa and Cuba. Given such a disappointment, is this the end of Marco Rubio's campaign?

To Rubio, a candidate who has become more well known for his faux victory speeches touting the election equivalent of a participation medal being awarded, there is simply no question as to why he would suspend his campaign. The Florida senator has consistently made statements that spin his losses into nothing more than pleas for a success he doesn't seem to be able to achieve this election season. Since touting his "third place victory" during the Iowa Caucus, Rubio has appeared frankly delusional in the momentum of his campaign. That disconnect from reality manifested itself in his closing statements.

Marco Rubio's GOP debate closing statement attempted to play on his hometown advantage, yet merely felt like the soft delivery of an inevitable campaign suspension speech. He talked of wanting to be able to provide for the country's posterity, while also marveling at how far he'd come in the face of humble beginnings. Once again, Rubio's trials and tribulations as the child of Cuban immigrants were trotted out. This time, the emotional resonance appeared to be replaced by a passive acknowledgement of defeat. "My parents never wanted me to go into politics in particular or anything else — they just wanted me to have the opportunity to live out all the dreams they once had for themselves," Rubio said in what will undoubtedly be a statement repeated when he hangs up his hat and returns to serving the people of Florida rather than running for president.

This is to say nothing of the opening statement stumbles and the climate change rant that was more ire than substance. Even worse, Rubio went head-to-head with front-runner Donald Trump on Social Security, nervously unveiling a completely nonsensical structuring system in which he has sought to raise the retirement age to address what appears to be a nonexistent Social Security crisis, going on to repeat even more puzzling figures that simply don't make mathematical sense when it comes to addressing national debt.

It appears as if math isn't Rubio's strong suit. As the candidate continues to spin his dismal delegate and polling numbers into a reason to continue his campaign, he appears all the more out of touch with even his own political party. As of this writing, Rubio is in third place and is trailing front-runner Trump by 307 delegates, to say nothing of the 208 delegates he'd need to even tie with Ted Cruz. That's well over the amount of delegates that Rubio currently even possesses.

The numbers certainly don't look good when it comes to winning his home state of Florida, which Rubio is desperately banking on. The winner-take-all primary is the largest March 15 event in what is being referred to as Super Tuesday 3. Florida is offering up 99 delegates to whomever receives the most votes. That candidate doesn't appear to be Rubio, however. In a recent Suffolk University poll prior to the state primary, Rubio is in second place. He trails Trump by a good 9 percent — a number only slightly larger than the 4.4 percent give or take margin of error.

If his dismally attended Hialeah rally prior to the GOP debate wasn't enough of an indication, many voters have even stated that they'd rather vote for former Florida governor and failed presidential candidate Jeb Bush than cast their vote for Rubio; some Bush supporters would rather put their faith in a candidate who's no longer running than in backing Rubio. Losing Florida appears to be the only substantial wake-up call out there to thrust Rubio out of his delusions and into the sobering reality that there is simply no way he can win the presidential nomination.