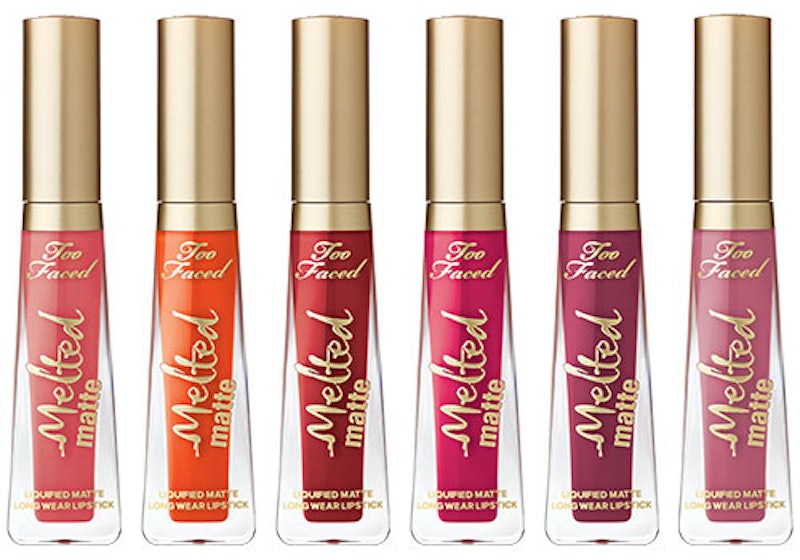 Here I thought that the upcoming Kat Von D x Too Faced collab or the waterproof version of the now-iconic Better Than Sex mascara, which is out next week, were the most monster launches on Too Faced Cosmetics' horizon. There's actually another maj product debut on the way and it's Too Faced's Melted Matte Lipstick range. The set falls under the brand's Melted Liquified Long Wear Lipstick collection, which is known for rich, mega opaque, and decadent color and comes in sponge-tipped squeeze tubes. But there are several key changes to this new version of the Melteds. OMFG, right?

Move over, Kylie Lip Kits. Too Faced is making a play for your turf... although that is a bit of an unfair categorization, since brand founder Jerrod Blandino is known for promoting unity in the beauty industry via the #BetterTogether hashtag, noting one brand needn't fail for another to be successful. That's also why Kat Von D Beauty and Too Faced are mashing up.

Click Here To Shop The Too Faced Melted Matte Lipsticks

But back to the matter at hand, er, lips. When are the Too Faced Melted Matte lipsticks going on sale?

The Too Faced Melted Matte lippies, which boast a new formula, new shades, and new packaging, according to Allure, will be sold exclusively at Sephora beginning April 5. There's a pink shade called Marcia, Marcia, Marcia that will be exclusive to Too Faced's site and a purple shade named On Point that will Sephora-only.

So, yeah, April 5. That's less than a month away. Yay! Stop whatever you doing and program a reminder in your iPhone and mark it on your calendar.

There will be a whopping 18 shades, covering a wide color spectrum. The lipsticks will come with a $21 price tag, as well.

There are neutral, nude, and pink shades!

There are also bold, bright berries to choose from.

Or go with the darker, gothier hues.

The Too Faced Melted Matte lipsticks join an overall lineup that also includes the Melted Metal and Melted Chocolate collections, which offer major color payoff and sheen, along with yummy texture and taste.

What's different? Well, obviously, the packaging. Above is the usual Melted packaging — a squeeze tube with a sponge tip that is a self-contained applicator. The Melted Matte lipsticks come in what looks like a non-squeeze, lip gloss-like tube with a spongy wand, which can allow for better, more defined application. Matte lips are super precise, so the wand gives you more control.

As for the formula, Allure reports that the the formula is more saturated than other versions of the Melted collection. It's mega moisturizing, since it's infused with avocado oil, vitamin E, and hyaluronic filling spheres. The latter offers smoothness and hydration. Also, there's a secret ingredient dubbed "Vollulip," which leads to plumped lips sans sting.

Too Faced is once again changing the liquid lipstick game.

Bustle reached out to Too Faced for further information on the Melted Matte range.