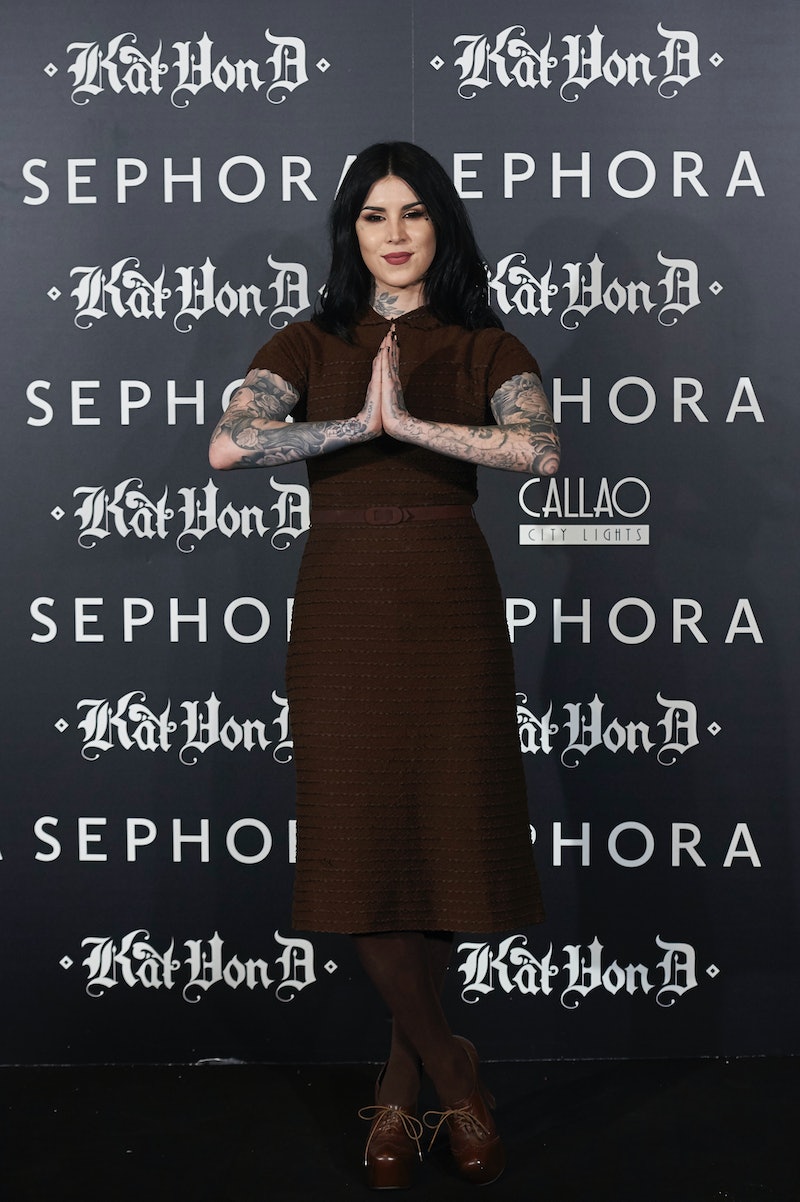 I don't know how much more of these hints I can take, as the excitement, the anticipation, the curiosity, and my imagination are making me nuts! Must. Have. Now. Kat Von D teased her upcoming Too Faced collaboration —again— and while she didn't give us much in the way of concrete details or hard facts, I was able to glean some information from the caption clues. The one thing that I do know, sight unseen? That the Kat Von D x Too Faced collab will be insanely awesome once it lands in stores, since this collision of opposite aesthetics is bound to be perfection. KVD is part rock 'n' roll, part goth, and all edge, while Too Faced is pink, pretty, and girly with just the right dash of sass. This mashup will be the best of both cosmetic worlds.

Plus, Kat Von D Beauty collabos are always aces, like the one she has with beautyblender, which consists of her foundation and a black bb sponge. #ICan't

The celeb tattoo artist and makeup maven first teased a studded lipstick case and a glossy, heart-shaped black compact, proving the brands are made for each other. Then she posted a photo with Too Faced founder Jerrod Blandino and while at the company's HQ, further teasing the partnership to her diehard legion of makeup fans, making them super excited.

Here's Kat and Blandino, hanging out and hugging. But what do the clues tell us? It's all in the caption.

My analysis is this. She and Blandino were together, celebrating. That must mean that their collabo is "thisclose" to being available. They are probably finalizing the details and putting the finishing touches on the promotion and launch. I mean, duh, right? Or I am just wishfully thinking.

She also hashtagged the photo with "coming soon." Yes, she has done that before, but there is only so much teasing one can do before it turns to frustration among customers. Cough, Kylie Lip Kits, cough.

She also hashtagged "Sephora," which is where both brands are sold. Clearly, the collabo will be sold at the modern makeup mecca. But will it be exclusive to Sephora? We're not sure. It could also be sold via Too Faced's site and KVDB's site.

I mean, could it be anymore perfect than these?

Blandino also posted how amazing it has been working with Von D, about how they are "better together," which she also hashtagged, and how the beauty industry can both change the world and teach it a valuable lesson by partnering up, instead of dividing. It is such a sweet post! Plus, we see the meeting of the minds.

What a pair! They are indeed unique on their own but they are even better together!