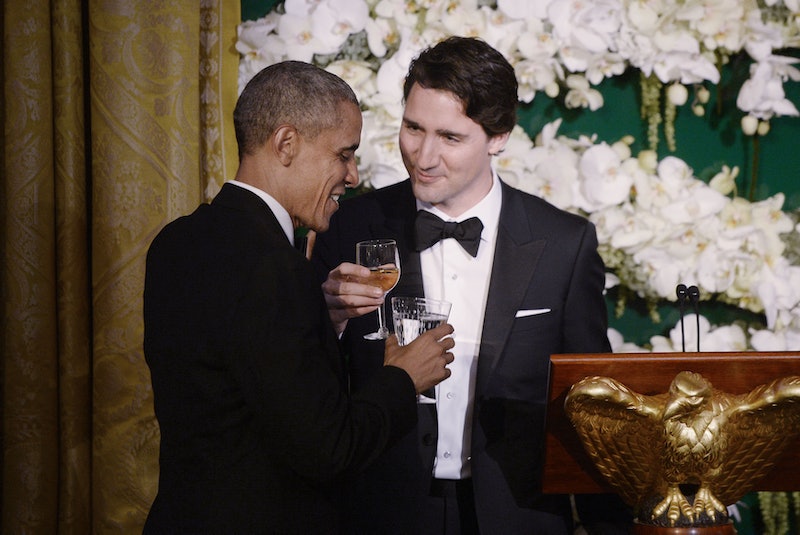 President Obama welcomed Canadian Prime Minister Justin Trudeau to the White House Thursday morning, and it was everything you might have hoped for. Thursday's visit was the first official visit for a Canadian Prime Minister to the United States in 19 years. All eyes were on the Obama and Trudeau bromance, and it was anything but disappointing. The two world leaders have a short time left to kindle their friendship, as Obama will be leaving office in November, but there's no time like the present to share the love with the rest of the world.

Trudeau and Obama share a similar vision for the world — one for change, centered on more progressive values than the average political establishment. They have had a similar standpoint on issues like accepting Syrian refugees with open arms. “We see ourselves in each other, guided by the same values,” Obama said of the Canadian government at the event welcoming Trudeau to the White House.

Perhaps his comments were also in regards to the Prime Minister himself — reminiscent of a 2008 Obama — who campaigned in November 2015 on the same platforms of "hope" and "change" as the American president's 2008 run. Trudeau said of the American president, "For me to be able to count on a friend who has lived through many of the things that I'm about to encounter on the political stage, on the international stage, it's a great comfort to me."

Just look how they greeted this baby together.

Of course, it would be too good to be true to expect two world leaders to agree on everything. For instance, regarding who is better at hockey, Obama pointed to the current location of the Stanley Cup — with the Chicago Blackhawks, "in case you Canadians were wondering." He said, "There's some things we will probably never agree on — whose beer is better, who's better at hockey," to which Trudeau initially responded by simply shaking his head.

As an exporting nation, Canada is always eager to work closely to reduce trade barriers between our countries. And speaking of exports, we know with certainty that there’s a high demand for Canadian goods down here. A few that come to mind that President Obama just rightly recognized as being extraordinary contributors to the American success story ... Jonathan Toews, Duncan Keith, and Patrick Sharp of the Chicago Blackhawks.

Disagreements aside, later Thursday evening at the White House state dinner Obama was kind enough to gracefully share some very important hair care secrets with Trudeau telling him, "If, in fact, you plan to keep your dark hair, then you have to start dyeing it early. You hit a certain point, it's too late."

One thing's for sure, it's refreshing to see two world leaders getting along and making jokes, even if their relationship won't last much longer. We see you, Trubama, we see you.