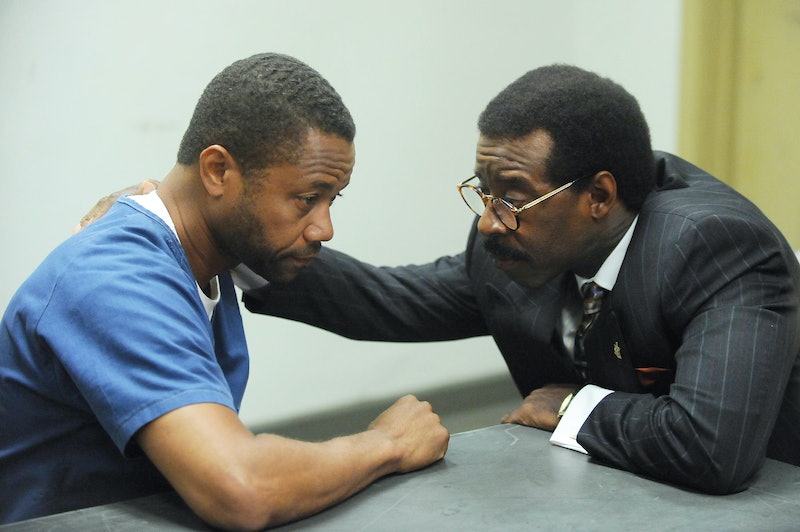 There are two components of the O.J. Simpson trial that have lived on in infamy past the actual proceedings — the Bronco chase and the bloody glove. When Johnnie Cochran stood in front of the jury and declared "If the glove does not fit, you must acquit," it became the catchphrase of the trial — and indeed, Simpson was acquitted of the murders of Nicole Brown Simpson and Ronald Goldman. While The People v. O.J. Simpson: American Crime Story seems to capture the reality of the court case fairly accurately, one reveal may seem unlikely to some viewers. Did Nicole Brown Simpson really buy the gloves that became such a prominent symbol of the trial?

According to a list of evidence published by USA Today in 1996, a discovered glove was described as a "dark, cashmere-lined Aris Light leather glove, size extra large." American Crime Story shows the prosecution discovering that Brown Simpson had purchased a pair of these gloves, and it seems that really happened, as USA Today reported that "Ms. Simpson bought Simpson two pair of such gloves in 1990." CNN also reported on the specific figures of these gloves being sold, showing the likelihood that the pairs Brown Simpson purchased were the same as those discovered at the crime scene and Simpson's home.

The demonstration came after testimony suggesting that Nicole Brown Simpson bought the unique style of gloves during a 1990 trip to Bloomingdale's in New York. Only about 300 brown, extra-large gloves in that style were ordered by Bloomingdale's for 1990. The store sold between 200 to 240 gloves and returned the rest to the manufacturer.

It was a significant piece of evidence because as USA Today reported, one glove was found at the crime scene, and another at Simpson's home, which also contained blood that "appeared to contain genetic markers of Simpson and both victims." Simpson's defense claimed that this glove had been planted at his home. When Simpson tried them on in court, the gloves appeared to be too small to fully fit his hands. You can watch the moment this happened during Simpson's real trial in the video below.

The notion that Brown Simpson purchased the same kind of gloves as a pair that were later discovered to contain blood that appeared to be her own seems too grisly to be true, but it did happen. However, as reporter Dominick Dunne (portrayed in American Crime Story by Robert Morse) recollected in a 1995 issue of Vanity Fair, "That the gloves contained the blood of his deceased former wife appeared to be of no consequence to [O.J. Simpson]."

Over 20 years later, the gloves remain a powerful symbol in pop culture. Brown Simpson bought a pair of gloves in 1990, an innocent, almost meaningless act. No one could have predicted that five years later these gloves (or two gloves like them), would become an integral part of the court case of the century, a trial that people are still digging through over two decades later to examine what it says about America, fame, and justice.

More like this
Where Is Oscar Torres In 'Only Murders In The Building' Season 2?
By El Hunt
Police Never Found Enough Evidence To Charge Sharon Marshall’s Killer
By Brad Witter
Kimberly J. Brown & Daniel Kountz Looked Back On Their ‘Halloweentown’ Romance
By Stephanie Topacio Long
Hannah Khalique-Brown Has Her Sights Set On 'Strictly'
By Frances Stewart
Get Even More From Bustle — Sign Up For The Newsletter