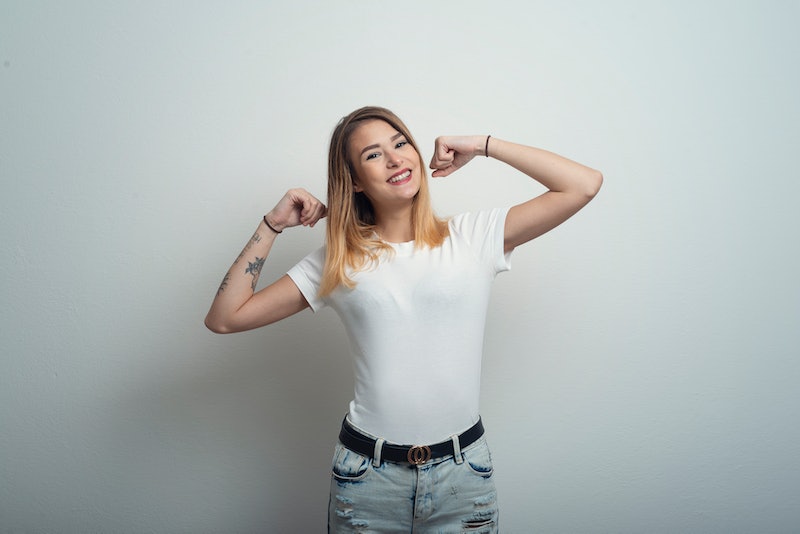 The patriarchal stereotype of women "serving" men may not feel as if it applies to you, you strong, sensual modern woman you. You kick ass! You shout back at street harassers! You take no sh*t from anybody! But the reality is that cultural expectations of obligation are still around us, subtly and unconsciously, dictating that we're obliged or bound to treat men in ways that don't challenge or destabilize them; instead, we're expected to mute ourselves, be polite and self-effacing, allow ourselves to be interrupted, and never violate the Code Of Female Niceness. This shows up in more overt ways, too: how often have you encountered dudes who are shocked that you don't "take a joke," or won't thank them enormously for some tiny kindness?

Screw that, frankly. Jennifer Lawrence broke said Code Of Female Niceness by talking openly about how she'd had to combat her own need to be "likable" as a woman to fight for equal pay; and every day new stories pop up about women on social media (often dating websites) breaking their "obligations" to be nice, charming, sexually available, and grateful to dudes; a decision that is often met with abuse. No, we are not obliged to be kind or ignore your harassment or do your work for you or make ourselves small to keep you happy. You can get out of here with that nonsense.

Here are nine things women are in no way obliged to do for men, despite the prevailing assumption in many areas that they are. Nope nope nope nope.

1. Be Civil Beyond The Minimum Standard

There's a widespread social expectation that women must always be overtly "nice" and "polite" to men, even after said men have done something offensive or upsetting. This isn't true. We don't owe dudes anything beyond the minimum standard of politeness in any social contract, which I'd say consists of "being civil, but nothing further, and certainly not after the person does something sh*tty". Women are under no obligation to laugh at your jokes, be hugely effusive if you do something minimally nice, respond graciously to any interaction, or sweetly tolerate attention they don't want.

Women do not have to take "jokes" that are sexual, degrading, invasive, sexist, or make them uncomfortable. You do not get to attempt to defuse your own poor and offensive attempt at humor (or, often, a remark that wasn't even meant humorously at all) by turning it into the fault of the woman for "not getting it," being a prude, or somehow having a problem. We're not under any obligation to laugh that sh*t off. It's not on us. It's on you for being an asshat.

Too often, the advice given to women experiencing harassment, whether it's on the street, professionally, or socially, is to rise above: be elegant, keep your mouth shut, direct the emails to the Spam folder, and sail on. But we don't have to do this if we don't want to. Women aren't actually bound to stay quiet and make no fuss if they're uncomfortable or angry at male behavior towards them. We don't have to take it in silence.

4. Give Sexual Attention Of Any Kind

Women don't owe men access to their underwear, or vice versa. Ever. Even if the man bought flowers. Even if he opened the door, or liked them on Tinder, or sent them sweet messages. Sexual attention is not a reward for "chivalry," or a video game level that's awarded in response to a certain amount of "nice guy" activities. This is not a transaction; the "what will do you for me if I do this" thought process is not a valid approach. Sexual activity may be desired or requested, but it's not owed, and being informed that it is constitutes sexual coercion.

5. Work For Free, Emotionally Or Otherwise

Women do not owe free work to anybody. We are not required to help anybody with their emotional difficulties or workloads on top of our own, simply because we happen to possess uteruses. We do not have to be "nice" and "giving" and "helpful" for nothing. We are allowed to say "nope, I'm busy/pay me or f*ck off". Emotional labor is a thing, both at home and in the workplace, and women don't have to offer it if they don't want to, even if the expectation is overwhelming that they do.

Incidentally, this, for me, also applies to explaining feminism. I am not required to do unpaid work to outline women's inequality for you when that's actually my day job. (You would be surprised how many men, many of whom hold offensive views about feminism, expect me to "educate" them on request, at their leisure.) Pay me properly and I'll give you an hour-long lecture, but otherwise, champ, you can read my articles, unless I feel like talking about it.

6. Be Intellectually Or Professionally "Unthreatening"

We're not required to make men comfortable. We're under no obligation whatsoever to behave in ways that keep men in our intellectual or professional surroundings happily unthreatened, whether that's keeping our opinions out of meetings, acting "non-aggressively," making the coffee and doing the printouts, or having fewer demands for salary raises.

Many of us have been conditioned to believe the female role is as people-pleaser, as fitter-in, as the one who keeps the boat un-rocked, because a woman being vocal, domineering, or demanding seems to make other people uncomfortable. But we're not bound to be emotionally compliant and dampen ourselves down for male comfort; and if they're threatened, they can get out of the damn way.

No, women are not obliged to accept men talking over them in any context, professional or social. (There's even a term for this: "manterruption," where dudes simply talk straight across women, sometimes without even consciously noticing they're doing it.) Studies keep reiterating the nasty truth that women get interrupted more than men in every context, even by other women. Just because it's common and expected, though, does not mean we're required to accept it. Anti-interruption techniques include keeping pauses short, maintaining loud, clear diction, and making it clear at the beginning of a talk that you don't tolerate interjections.

8. Be Grateful For Male Attention

"Bitch, you should be glad I even looked your way!" is not a thing. Women do not owe men breathless thank-you cards for their attention, effort, or love. If you want bonkers gratitude every time you throw a bone, get a dog. This nonsense is based on the presumption that the gift of male attention of any kind (whether welcome or unwelcome, charming or upsetting, gentle or harassing) is such an enormous boon that women must always feel blessed by it. Spoiler: yeah, it's not.

We are under no obligation whatsoever to let boys do "boy things," if said boy things are making our lives completely and utterly suck. Men are awesome, but if they start using their dude-ness to make excuses for bad behavior ("I have to catcall, it's in my nature! I just naturally believe women are there for my sexual pleasure! Of course I can't control my anger!"), there's no reason for us to take it. We're allowed to start a conversation about the traps of masculinity, and how gender stereotyping is real and damaging for both sexes. Nothing actually binds us to accept any of this stuff.