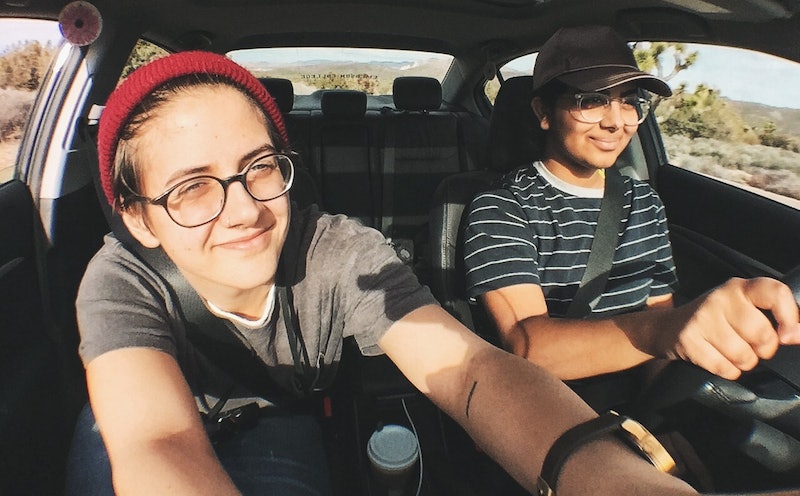 Shortly before I turned 22, my dad surprised with me an early college graduation present: A new car. As someone who had spent the previous three years relying on Boston's subway system, I thought that I would never need a car in my life so long as I lived in cities with solid public transportation. But as soon as the paperwork was finalized and that black Honda Civic officially belonged to me, I realized that owning a car would change my life, opening up my world to an almost endless number of possibilities I hadn't even considered before. Plus, I would eventually move to Los Angeles, and even though public transportation does exist here, any Angeleno will tell you that having a car in this city is basically a necessity.

Though subways and bus systems are fantastic, their scope can be limited: They're built primarily to help people access the parts of cities and states that tend to be heavily populated, house a large number of jobs, or play host to tourists. If you're looking to do something a little more off-the-map, public transportation might not be your best bet, especially if, say, your destination is two subways, three buses, and a 30 minute walk away from your point of origin. Even if you're not necessarily looking to go on adventures, having a car can often reduce the amount of time it takes to run an errand, makes it easier to buy a ton of groceries at once (it's really hard to take the subway home from Costo — trust me), and is a great way to help out your friends in need of rides.

What I found most interesting about the whole thing, though, is this: While getting a car is a right of passage for many teenagers who have just passed their driving tests, the experience of getting your first car when you're still in high school is dramatically different from getting your first car when you're already an adult. If you're like me and didn't get your first car until many years after you got your license (six years, in my case), you might recognize these six ways your life changes — sometimes in ways you didn't expect.

1. You Want To Go On Adventures... All The Time

In the five months I've had my car, I've driven it through Washington, Oregon, California, Massachusetts, Pennsylvania, Maine, Vermont, Connecticut, and Rhode Island. My car has trekked through desert sand and mountain snow. It's seen the highest point on the Eastern Seaboard and been parked in the lowest point in North America; it has driven through the tallest trees in the world; and it has helped me move my life from Seattle to LA. Needless to say, getting a new car opens up your world to so much adventure. When your maps app tells you that something is two hours away via public transportation, you might be likely to shy away from the adventure; however, when something is two hours away via car, you couldn't be more excited to jump in and go for it. Even though I'm still a student with a part-time job and an internship, I go on weekend trips almost every weekend because my car has made California and its bordering states so much more accessible.

Like I said before, I took a three day road-trip from Seattle to Los Angeles with my best friend when it was time for me to move to California. Before I had my car, the only option I would have considered would be to fly, and though it's certainly quicker, it takes the fun out of everything you experience on the road and all the kind, quirky people you meet along the way. Though I'm originally from the West Coast, driving along the Pacific was the first time I experienced the West Coast, and that glimpse I was lucky enough to get totally changed my world.

3. You Understand Your Privilege Better

I know that I'm a very lucky person — my family was able to afford a car for me, I was lucky enough to have access to driving schools and safe cars growing up (which ultimately helped me get my license early on), and I have enough funds to afford weekend adventures and road trips. As someone who has taken public transportation for most of her life, I understand its caveats. Public transportation can be dangerous or scary for women, hard to tolerate in extreme cold or extreme heat, unreliable when you have to get somewhere on time, stuffy and scary for people who don't do well in crowds, and generally uncomfortable. For me, this perspective is important because it reminds me I'm not entitled to my car; rather, I'm lucky and privileged to have it.

4. You Better Understand Your Environmental Impact

This point is twofold: First, people with a car get to see so much of the natural world around them, which encourages many people (myself included) to do a better job preserving the planet and wildlife. Secondly, having a car made me very aware that gas use would increase my eco-footprint, so when looking at different options, an eco-friendly feature and gas mileage were huge priorities for me. When I realized how much my one car contributes to carbon dioxide emissions and global warming, I made it a point to be more deliberate about driving. Carpooling is one solid way to do this and ensure that only one car is on the road instead of five. I also make sure to leave my car keys at home and walk to places where I can access the sidewalks and roads without my car. Though I clearly love my car so much, sometimes my legs do the trick better.

5. Everyone Wants A Ride Everywhere (And For A While You'll Oblige)

When I got my car back in October, everyone suddenly wanted me to pick them up from places and drop them off to parties, be the designated driver (since I'm not much of a drinker anyway), or take them for a spin. In the beginning, I was always eager to do so because I wanted to show off my new car just as much as I wanted any excuse to take it out. But after a while, it got a little old and my friends realized I had a life other than driving my car. This aspect of getting a new car can be a little annoying, but people usually quickly realize to back off.

6. You Start Understanding Things Like Car Insurance and Maintenance Costs... Kind Of

OK, I'll be honest: I don't really understand car insurance policies or why certain things are necessary for the maintenance of my car. But I certainly understand more than I did before owning a car, and I'm slowly learning. Knowledge is power, even if it is the most boring kind of knowledge.