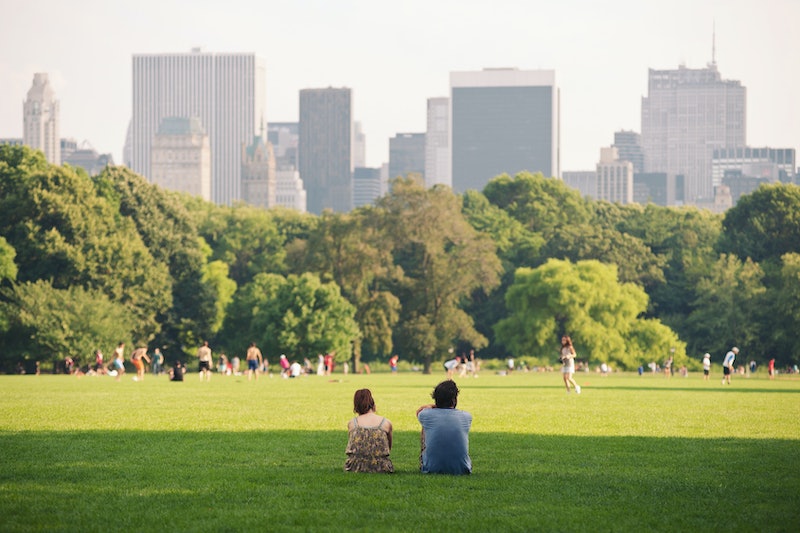 There were two things I believed with absolute certainty when I moved to New York city six years ago: I would become a successful writer and I would fall, ridiculously, insanely in love.

The first one took a lot of hard work, long hours, and writing articles for free, but as you can see (since you're reading this very story!), I'm a writer. The other one though? Well, it's required the same hard work and long articles (and yep, free dates) — but it hasn't produced quite the same result. Of the six years I've written New York, NY on the back of envelopes, I've spent 4.5 of those single. I've been actively dating, sure, and more times than not, keeping a hopeful attitude about it. I won't lie — it hasn't been easy being single for many years. Even though New York gets a bad rep for being a notoriously difficult place to find a relationship, it is an easy place to see love.

This city may be boisterous and bustling, often busting at the seems with energy and chaos, but there are so many moments where people slow down. They breathe. They kiss the forehead of their partner while waiting on a train to move. They hold open doors for the elderly and they tell you look beautiful when you just took an hour-long boxing class.

It's cheesy, sure, but it's true: love is found everywhere in New York. And though I hope I won't be single forever and ever, I'm thankful for all of these things that the Big Apple has taught me about love.

But first, hear New Yorkers spill their sex confessions on Bustle's Sex and Relationships podcast "I Want It That Way":

1. Love Is Taking Time To Be Kind

The other day, an older man in a wheelchair was trying to grab something from behind and was struggling. Even though I had just ran four miles and had bags of groceries, I stopped to ask him if I could help. What was he looking for? Some nuts to feed the squirrels in the park. He smiled brightly and thanked me for taking a moment to assist him. I'd like to think that I'm special, but I see acts of kindness like this all the time: people carrying strollers down subway stairs, others volunteering their time to make sandwiches for the homeless and strangers giving a warm smile to another stranger. Love isn't just about romance and candlelit tables, it's about being kind.

Since it's inception, New York has been a breeding ground for all sorts of nationalities, religions, and demographics. And I have to say, there's a reason why we're often credited with having some of the most beautiful people: there's something amazing that happens when you let people date, love and marry who they want without any limitations. Though I can't speak Chinese or Spanish, and I've never been in love with a woman, I've watched couples speaking all sorts of languages snuggle and whisper under street lamps. Love doesn't care what you look like or who you sleep with, it just cares that you're with someone who makes you happy.

Coming from a place like North Carolina where many of my friends from high school and college were married — and expecting — all before I had a second to get settled in Manhattan, I was always a little concerned with what age I'd get married. But ya know what? I've seen couples get married at 26. And 36. And 45. I've seen people have babies— naturally — at 37, and others who struggled to get pregnant at 24. When it comes to finding a person to share your life with, there shouldn't be a deadline or a timeframe where you 'should' get together. New York encourages you to explore on your own before you pair your life with someone else — if that's even something you want. And it's a notion that I wholeheartedly prescribe to.

On any given night, New York offers you a myriad of options: go see a show. Try a new restaurant. Go to a hidden comedy club downtown. Grab dumplings in Chinatown. Go on an evening run on the East River. Order Seamless and drink wine. And as a single New Yorker, you're also faced with many choices of people to date. You can find them at any of the places above (except maybe, your couch), or you can swipe on the dozens of new dating apps. While there are pros and cons of having so many options, ultimately, being with someone means you're not just saying 'I love you' — you're saying, of all of these things and all of these people, 'I choose you.'

5. Love Is Forgiving When Life Is Not

As much as I wish New York would give me a break when I've had a no-good, terrible, ridiculous day, the city doesn't quite make things easy for you. From commuting daily to paying high rents (that just keep getting higher) — the city gets what it wants and doesn't ask for your approval, and definitely not your forgiveness. But there's a certain camaraderie between New Yorkers in this: we all realize that it's hard, so we'll be there for one another to get through. We can be forgiving of each other's annoyance on a train that's delayed underground because we all decided to be on that train at the same time. Love is like that too — no matter why something bad happened or how you reacted, you forgive one another and move forward.

There's a phenomena that happens when those first few days of Spring come around after a winter in New York: people smile at each other. They are courteous to one another. For a few days, everyone is connected because we're all so freakin' thankful that we don't have to wear 10 layers to get from point a to point b. The energy of the city is simply contagious, a lot like love. The more you give, the more you believe, the more you show it and act on it, the more that comes your way.

There's not much that can make a New Yorker stop: maybe a baby stroller. Or construction that we barely hear over our headphones. But for most city dwellers, speed-walking on sidewalks is our form of exercise (and comes with rage unlike any other). That's why we finally meet someone who we actually want to hold hands with as we walk to the farmer's market or the food truck gathering... we're taken aback. We all need to hit that 'pause' from time-to-time, but it's usually love that forces you to.