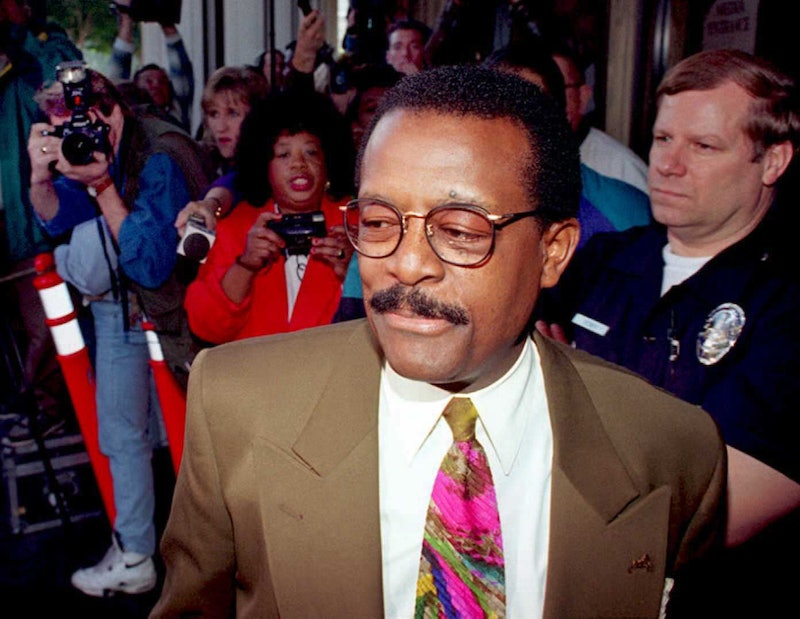 O.J. Simpson was already a household name when he was charged with the murders of his ex-wife Nicole Brown Simpson and her friend Ron Goldman — but by the time the trial that would find him not guilty of both charges started, lawyers on both the prosecution and defense teams had also been thrown into the spotlight. As we've seen on Ryan Murphy's series The People v. O.J. Simpson: American Crime Story, newspapers and tabloids delved into aspects of the lawyers' personal lives. In the March 8 episode "Marcia, Marcia, Marcia," it was revealed that Johnnie Cochran's ex-wife, Barbara Jean Berry, had accused him of domestic violence, a claim which he denied. Tuesday's episode references another aspect of their acrimonious divorce — did Johnnie Cochran really have a second family?

According to The Los Angeles Times, Cochran had a relationship with Patricia Sikora while he and Berry were still married. Sikora and Cochran had a child together, Jonathon, who was working as a California Highway Patrol officer as of 2005. The newspaper also noted that Cochran liked to remind people of his son's occupation when he was accused of hating police officers, so it appears that he was fairly open about the fact that he had a child with Sikora while he was still married to Berry.

In an unlikely turn of events, Sikora and Berry collaborated when Berry penned a post-divorce memoir about her relationship with Cochran. In her book Why I Left the Sweetest-Talking, Most Successful Black Lawyer in L.A., Berry apparently "swapped stories" with Sikora who was described by People as Cochran's "longtime mistress." According to The New York Times, Berry also stated that Cochran took out a loan to buy a house for Sikora in 1973. She claimed that he tried to persuade her "to sign an agreement that she had no rights to the house," an allegation that Cochran denied. The paper also reported that Cochran sent Sikora $4,000 each month until 1995, when she filed a palimony suit that was settled out of court in 2004. The New York Times noted that Cochran had stated the monthly payments were to support his son.

Although Cochran never denied fathering a child with Sikora, he and Berry provided wildly different accounts of how much she knew about his relationship. When he published his 1996 book Journey to Justice, SFGate.com reported that:

Cochran attempts to make it appear either that his marriage with Berry was over before he began his relationship with Patty Sikora (that would make him about 100 years old) or that all was hunky-dory among his legal and under-the-table families, with Berry happily baby sitting for Jonathan, the son Cochran fathered with Sikora (and whom Berry says she didn't know existed).

Cochran also alleged that Berry and Sikora "began earning extra money by peddling concocted stories about our relationships to the tabloid press," but he didn't elaborate upon which stories were false. It's clear that Cochran, Berry, and Sikora agreed on precious few points, but it has been confirmed by all three parties that the leader of the Dream Team fathered a child with Sikora while he was still legally married to Berry.