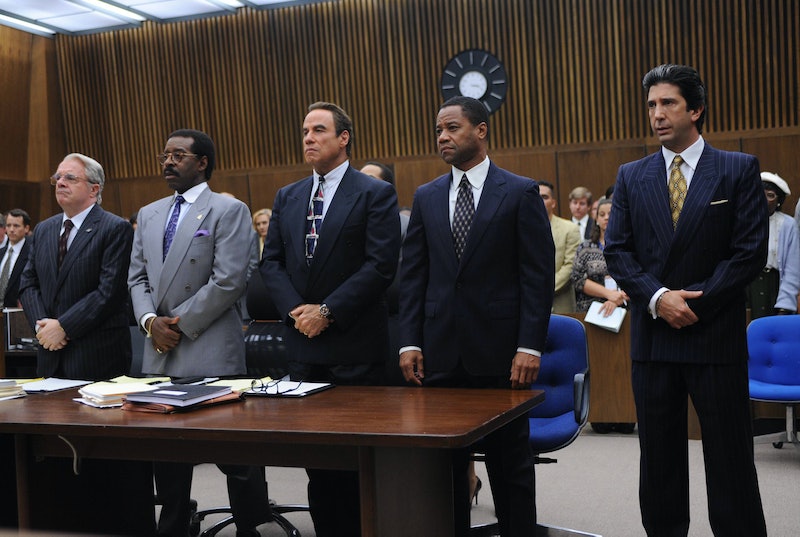 In FX's American Crime Story, viewers have seen both the prosecution and the defense's sides of the story from O.J. Simpson's trial. As the series will show in this week's aptly titled "Conspiracy Theories," in their attempt to have Simpson acquitted of the crimes, which he eventually was, the defense presented other potential explanations for the murders to the jury. One was the theory that drug dealers killed Nicole Brown Simpson and Ronald Goldman, as reported by the New York Times. According to the newspaper, Johnnie Cochran suggested in court that both victims were killed by Colombian drug lords looking for Brown Simpson's friend Faye Resnick, who had previously undergone treatment for cocaine addiction and stayed in Brown Simpson's home. However, this particular theory did not get very far.

While Cochran questioned LAPD Detective Tom Lange in March 1995, he pointed the testimony to float the theory that drug dealers on the hunt for Resnick murdered Brown Simpson and Goldman in the style of a "Colombian necklace," also known as a "Colombian necktie," according to the NY Times. Lange, however, wasn't 100 percent behind this reasoning, even if the style of killing matched the way the two victims were slain. "The fact that a victim's friend uses drugs is of very little consequence to me," the detective said during questioning, according to the Times. "The fact that every bit of evidence that I have in this case points towards the defendant has a lot more to do with it."

Resnick also addressed the theory in her book, the 1994 best-seller Nicole Brown Simpson: The Private Diary of a Life Interrupted. The Brentwood socialite had heard rumblings of how she factored into the defense's case, according to Vanity Fair. "Word leaked to me via friends and reporters that O.J. and his lawyers had discussed floating the astounding and absolutely groundless claim that Nicole and I had borrowed money from Colombian drug dealers to open a Starbucks coffee shop, and that was why Nicole had been murdered!" she wrote. However, Judge Lance Ito did not let this assertion advance in the trial.

In July 1995, the New York Times reported that Judge Ito barred the defense attorneys from using the theory in court, calling it "highly speculative." The judge cited a 1986 ruling by the California Supreme Court, which states that there must be "direct or circumstantial evidence" tying a third party to the crime in question, and according to the NY Times, the defense did not present any such evidence. Los Angeles prosecutor Cheri Lewis further pointed this out, as reported by the Washington Post. "Who was her dealer? Who did she owe money to? Is this person someone the defense can identify?" Lewis asked during the trial. "It's all speculation. All it does is confuse and mislead the jury."

Although the theory was thrown out of court, it will certainly be interesting to see how it plays out in the seventh episode of American Crime Story.

More like this
Where Is Oscar Torres In 'Only Murders In The Building' Season 2?
By El Hunt
Yinka Bokinni Recalls Terrifying Truth At Heart Of 'How To Hire A Hitman'
By Frances Stewart
'Line Of Duty's Writer Just Dropped A Bombshell About Steve & Kate
By Catharina Cheung
The “Beatrice Six” Were Awarded $28 Million After Their Wrongful Convictions
By Brad Witter
Get Even More From Bustle — Sign Up For The Newsletter