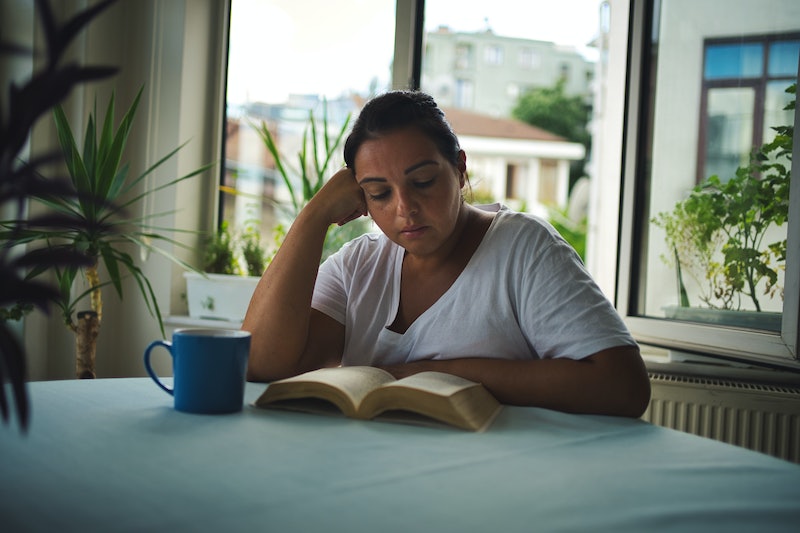 Monthly parties in our pants are never fun, but when your period suddenly becomes heavier without explanation, they can also be rather frightening. What in the name of the Moon Goddess is going on? Who decided that this was the month to exhaust the entire state supply of tampons and pads? And could having a heavier period than normal point to a more serious medical condition?

The technical term for a heavy period is menorrhagia, and the question of "how much is too much?" is actually quite a tricky one. You may be surprised to know that the average period only causes between 30-40 mL of blood loss, and that the normal upper limit is about 80 mL; if you're experiencing more than that regularly, apparently it's a sign of heaviness, but since most of us don't actually weigh our menstrual blood, we rely on knowledge of "normal" cycles to diagnose what heaviness actually means. We're most likely to bleed heavily in our teens and just before menopause, which are the periods when estrogen levels spike, but "heaviness" becomes an issue when you're going through many sanitary items a day, are becoming anaemic, and/or there are blood clots larger than a quarter in your flow.

If you're having severe problems, your doctor will likely prescribe something that increases the level of progestogen in your body, which slows down the growth of womb linings (after all, it's the shedding of the womb lining that makes up the bulk of the period, and the thinner it is, the lighter the flow). Ibuprofen is also supposed to help, but don't take that regularly as treatment without your doctor's OK.

Here are nine reasons why your period may be heavier than normal.

This is a biggie. If you've recently changed your birth control method, you may notice heavier flow than usual. If you're going off the Pill entirely, you'll likely notice a heavier period flow as your body adjusts to its new hormonal balance, and mini-pills (the ones that are progestogen-only, as opposed to the combined pill that also contains estrogen) are known to cause heavier flow. (I've just switched to a mini-pill and can corroborate this fact.) The contraceptive implant, or Implanon, is often associated with heavier bleeding patterns both during and after the period, but the contraceptive patch is often associated with lighter periods, so if you've switched away from it you may notice a heaviness in response.

If you've had an intra-uterine device (the copper coil or the hormonal IUD) implanted, you'll have been warned at the time that one of the most common side effects is considerably heavier periods. The good news is that practitioners say this heaviness generally settles down within the first few months of insertion, generally after three or four cycles, and recommend that you handle the extra bleeding with ibuprofen and iron supplements to prevent anaemia.

This is pretty self-explanatory. People on anticoagulant medications are taking them to reduce the capability of their blood to clot, generally because they're at risk of strokes or heart attacks. Reducing the clotting capacity of blood means it flows more freely, which results in much more flow during periods.

4. You Have Polycystic Ovary Syndrome

Polycystic ovarian syndrome describes a condition where many small cysts grow over the ovaries, and can range from very mild to severe (in a quarter of cases). The occasion of heavy periods is associated with the mild end of the spectrum, where the small cysts inhibit the proper function of the ovary and cause a hormonal imbalance that thickens the womb lining, meaning that periods, when they come, are excessively bloody. At the more severe end of the spectrum, PCOS sufferers regularly have absent or very irregular periods. PCOS is diagnosed through a combination of tests looking for irregular periods, high levels of male hormones in the body, and scans of the cysts themselves.

5. You Have Uterine Fibroids

Before you have a heart attack, calm down: apparently, up to a third of all women develop uterine fibroids in their lifetime, and they're just benign growths. They seem to be associated with high estrogen levels and tend to crop up in fertile women, and they'll often go away without needing any treatment at all, so there's no need to worry unduly if your doctor recommends you leave them. While they're there, though, they might cause some discomfort, including abdominal pain, constipation, and (you've got it) heavy periods.

6. You Have Pelvis Inflammatory Disease

This is a nasty one, unfortunately. Pelvic inflammatory disease occurs when there's a bacterial infection in either the womb or the fallopian tubes, and an abnormally heavy period is one of the signs. But it won't occur on its own, so this isn't the right explanation for a heavy period with no other symptoms. Other signs of PID include painful sex and/or urination, an ache in the lower abdomen, a fever, nausea and strange green vaginal discharge — though it's the sort of infection where symptoms can appear in various arrangements, not in one normal set.

Unfortunately, up to 90 percent of cases of PID are caused by the sexually transmitted infections chlamydia and gonorrhea, and it can cause serious problems for fertility, so if you're experiencing any of the symptoms get thee to a doctor immediately.

As a condition, this is particularly likely if you're middle-aged and have had several children, so many of you won't be there just yet. Adenomyosis is otherwise known as endometriosis of the uterus, and happens when cells from the inner lining of the uterus manage to migrate into the uterus's muscular wall. Often this means the wall becomes very hard and the uterus enlarges, causing pain and discomfort. It's not uncommon, but it is painful and causes seriously heavy bleeding, and won't go away on its own until after menopause, so your doctor will likely suggestion medication to help you get through the associated symptoms.