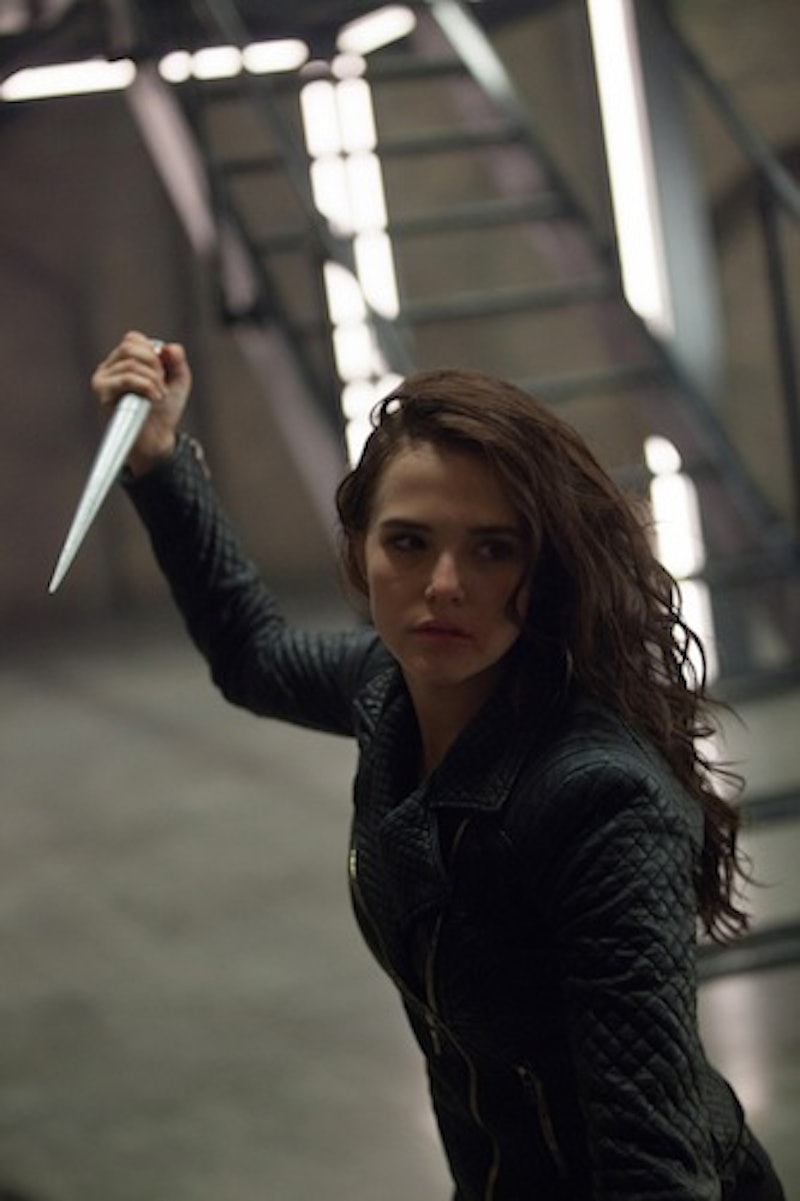 It may be a vampire joint, but don’t get it twisted: St. Vladimir’s Academy is a far cry from Forks or Mystic Falls. The Vampire Academy vampire academy skews more “Hellmouth Hogwarts” than “supernatural love triangle in a small town.” Okay, I’m not going to pretend that I hate a melodramatic love triangle plot (that’d be very dishonest of me. Melodramatic love triangles are my jam), but you know what? I also like fun every now and again. I’m multifaceted like that. And Vampire Academy? It looks dark, freaky, and fun. I’m in. “[The movie] has a little bit of humor and wit to it, and it doesn’t take itself so seriously,” Vampire Academy director Mark Waters tells Bustle. “While at the same time, still delivers on the life-and-death stakes of having vampires try to kill you.” A resounding “YEP” to all of those things. Who else is in?

Based on the first book from Richelle Mead’s best-selling Vampire Academy series, Waters says the movie also promises action, suspense, and "intrigue to kind of give us that higher level of stakes, even beyond the high school stories.” And Waters knows high school: The director helmed 2004's Mean Girls and 2003's Freaky Friday, while his brother Daniel Waters — who wrote Vampire Academy's screenplay — wrote 1988's Heathers. Mean Girls AND Heathers? Two of the greatest, most iconic teen movies ever? Hey, Vampire Academy? You're in good hands.

Waters' experience proves his insistence that Vampire Academy "is not your same old vampire genre movie." One modification to traditional vampire lore: the introduction of the Dhampir, the Moroi, and the Strigoi, i.e., the three different classes of vampire. The Dhampir are not magic, don’t drink blood, but they are strong, agile guardians. The Moroi are the peaceful royal vamps. They have magical powers, can control the elements, and do drink blood. The Strigoi? Oh jeez. The Strigoi are evil, powerful, and immortal. The terrifying supernatural being holy trinity. But the lore isn't the only thing that sets Vampire Academy apart from other teen franchises. In fact, the film's characters are so strong and funny, you might find you actually like them better than some of film's most popular teenage idols. Like, say, one braided, arrow-shooting, box office dominating heroine. Here's why, according to Waters, you should sink your teeth into the Mead adaptation this weekend.

It Comes With Plenty Of Girl Power

The dynamic between Rose (Zoey Deutch) and Lissa (Lucy Fry), the two main characters, is “what makes this particular movie very distinctive,” Waters says. “Most movies don’t have two female leads in them ... If they have two of them, they rarely talk to each other,” he continues. “We have two women and their relationship is the core of the whole movie. Sure, they have relationships with guys, but their relationship is key.” You heard that right: At Vampire Academy, it's quite easy to pass the Bechdel Test.

Yes, the main characters are BFFs, but their friendship actually runs deeper than that: Rose (a Dhampir/protector) is mentally linked to Lissa (a Moroi princess). “Rose can go into Lissa’s brain and see and hear and feel what she’s saying when they have their connection,” Waters says. “I thought that was a really fascinating thing that I’d yet to see before.”

As compelling as the Rose/Lissa bond is on paper, bringing a literary character to the screen can be a tricky undertaking. What if it doesn't translate? fans may worry. What if they aren't exactly like I pictured in my mind? Well, I don't know if the movie versions of Rose and Lissa will be exactly like you imagined (to be fair, if they were exactly as you'd imagined, would that not freak you out? Or would you be like, "Nah, it's cool. The movie and I have a Rose/Lissa brain link thing going on"?), both actresses recognized the awesomeness of the characters and the project, and acted (see what I did there?) accordingly. "[Deutch and Fry] committed themselves to whatever was necessary to do their greatest possible performance here," Waters says. “From the moment they each auditioned, I kind of knew that they were already in the strike zone of the part."

Its Heroine Is Not Katniss... And That's a Good Thing

Mark says Rose is “not like any other YA heroine, even the really great characters like Katniss Everdeen.” Regarding Katniss, Mark laughs that she’s “kind of a bore.” “You admire [Katniss], but would you invite her to a dinner party? She’s amazing, she kicks ass, but she doesn’t really have much to say. She’s very stoic in her heroism.”

Vampire Academy’s Rose is a little less serious than our beloved Katniss, however. “Rose is very, very complicated, difficult, funny, and makes mistakes,” Waters says. “She’s overtly sexual. All of these things are really interesting to have for a lead character who’s not just politely sincere.”

Speaking of movies with more than one female lead, 2014 marks the 10-year anniversary of Waters' film Mean Girls. So, 10 years later, where would the North Shore High School alums be? “Cady probably went to grad school [and is] doing something interesting in research in a scientific field,” Waters says. “Probably not archaeology like her parents, but I could see her doing something that’s eventually going to be groundbreaking. I imagine she’s left and is living overseas.”

As for the original leader of The Plastics? “Regina is probably divorced already and a real estate agent,” Mark laughs.

Consider us appropriately sold on that vision... and, of course, Vampire Academy, which hits theaters Feb. 7.