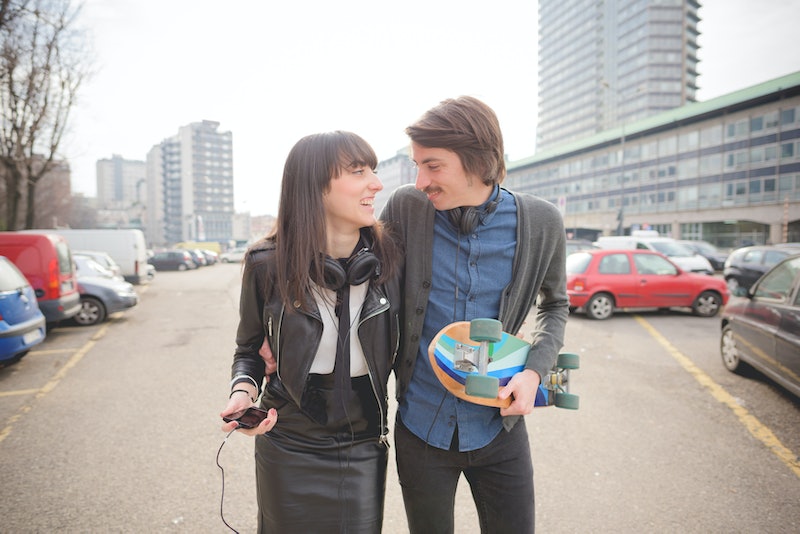 Even though lying in relationships can be kiss of death— it erodes trust and is definitely a catalyst for arguments— there's still a lot of it going on. And people have very different opinions on what's OK to lie about and what's not. How many little white lies do you tell to your partner? Is it OK to lie in certain circumstances? It's explosive stuff. And a new survey has given some insight into our behavior when it comes to things a little... less than true.

Direct TV surveyed 2,000 people to find out all about lying patterns — like who lies, who we lie, to and what we lie about. Granted, lying can range from a lot of different things. While some of them are hum-dingers, most of them are the harmless little white lies people tell all the time and the really, really annoying ones likes "Sorry, my phone died" or "On my way" when you're still in your sweatpants elbow deep in a pint of ice cream.

But it's interesting to see who we think it's OK to lie to. And it turns out, most people said they tell about one lie a day— with single people coming as lying slightly more frequently than married or even divorced people. Widows and widowers reported the lowest lying levels.

So who are these lying being told do? Here's who we lie to most, according to the survey.

But first, hear New Yorkers' biggest sex confessions on Bustle's Sex and Relationships podcast, I Want It That Way:

This was the number one group that people said they lie to the most — with 27 percent of respondents saying this was who most of their lies were directed to. That makes sense, with how much nonsense small chat you have to make on a Monday morning, you may have to tell some white lies to get the conversation over as quickly as possible so you can drink your damn coffee in peace.

Yikes — sorry grandma! 24 percent said that they lie to family more than anybody else. Considering most of us tell more lies to distant relatives on Thanksgiving than they do on any other day of the year combined.

According to the survey, 22 percent of people say they lie to their friends the most. I think that's where the "I'm totally on my way, see you in 10" lies come into it.

Nine percent of people said they lie to their parents more than anybody else. I imagine that most of these are fellow English majors explaining why their degree sets them up for a legitimate career and things are going to be fine. Right? Right? (What is a pension? Someone help me I'm not an adult.)

And, 7.5 percent of people said that the group they lie most to is none of the groups listed above. Which I actually really like, because it makes me think of people spontaneously shouting lies on the street at strangers just for fun. YOLO.