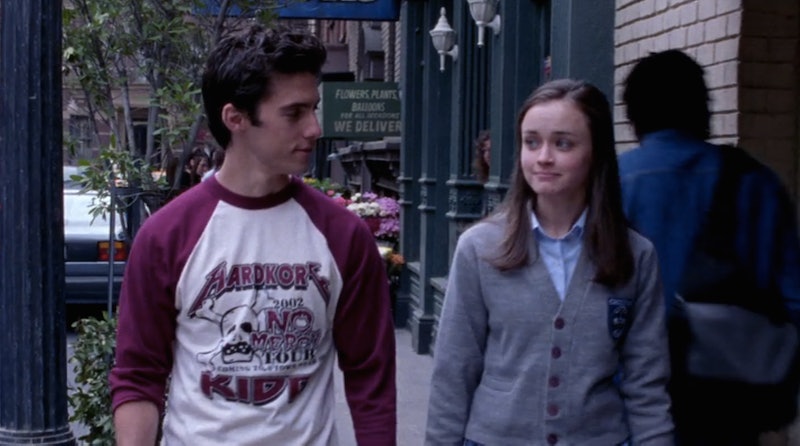 As we gear up for a triumphant return back to Stars Hollow, fans are clinging onto every granule of news about the Gilmore Girls Netflix revival. And if you've kept your ears peeled for the latest episode of the Gilmore Guys podcast, you'll find an especially tasty treat, fresh from Doose's Market. In an interview with Taylor Doose himself, Michael Winters insinuated that Rory ends up with one of her old boyfriends. Which is an intense semi-spoiler until you remember that, well, everything's fair game since all of Rory's former love interests are returning.

When the timeless question of "who do you ship Rory with" was broached, Winters admirably stayed away from the topic. "I would not touch that hot button," he said, laughing. "I want to stay away from it, they’re all such nice guys, Jared and Milo and Matt, you know? I don’t know, who would decide, who could decide?" It was an incredibly diplomatic response, especially since any declaration of being on Team Someone could start an internet firestorm.

But then, Winters proceeded to drop a bombshell, revealing that there may, in fact, be a contender that wins Rory's heart. "I think I know from the scripts who has an edge, but I’m not going there," he admitted. Doose, please, why must you tease us this way?

So who could be the front-runner? Even though Logan was Rory's last boyfriend, I'm assuming he's still pretty bitter after the Rory-rejecting-his-proposal thing. Maybe those two could rekindle things and make it work now that our girl's in her 30s and plausibly ready to settle down. Maybe they'll snap right back together faster than you can say "Yale alumni mixer." But also... maybe Rory's done embracing her blue blood roots (i.e. she's done trying to convince the Huntzbergers she's high class — she's a Gilmore after all) and therefore has closed the Logan chapter for good.

On the flip side, Dean is doing especially well for himself these days. According to some "on-set gossip" Winters overheard, Jared Padalecki, fresh off Season 11 of Supernatural, flew in on his jet. Let’s hope his Stars Hollow counterpart has broken free of the construction-and-cashier game and reached a similar level of success. Perhaps that would be enough to woo Rory, and it would be so poetic if she ended up with her first love.

Or maybe not. According to Winters, "he flew in and did his day and then flew back." If all of Dean's scenes could be chalked up in a day's work, then it would seem implausible (not impossible, but certainly implausible) that he has a long term romantic storyline with Rory brewing.

Though this comes from a place of extreme prejudice (all of my boyfriends are dark-haired, brooding intellectual types who have routine fights with swans), I think Jess is going to be the endgame pick. His story with Rory still seems fairly open, and as a character he was progressing positively, having rid of most of his unappealing teen angst. Plus, the Gilmore Girls fan base seems to lean Team Jess more than everyone... which again, is a prejudiced response base on my immediate friend group and the Internet versus actual scientific evidence.

Perhaps this is just a Doose-like act of villainy, a red herring of sorts, and Rory will end up choosing herself and her career again. It'll be a while until we find out. Until then, I'm excited to welcome back Taylor, and hope he's setting up a town meeting that'll have Stars Hollow debate the merits of Rory's suitors.

More like this
Twitter Is Unravelling Over Wolverine’s Return For 'Deadpool 3'
By Darshita Goyal
There's At Least 1 Major Difference Between The 'Vampire Academy' Book & TV Series
By Grace Wehniainen
Nicola Coughlan Shared A Lady Whistledown Excerpt From ‘Bridgerton’ Season 3
By Grace Wehniainen, Alyssa Lapid and Sam Ramsden
Everything To Know About 'The Last Of Us' TV Adaptation
By Sophie McEvoy and Radhika Menon
Get Even More From Bustle — Sign Up For The Newsletter