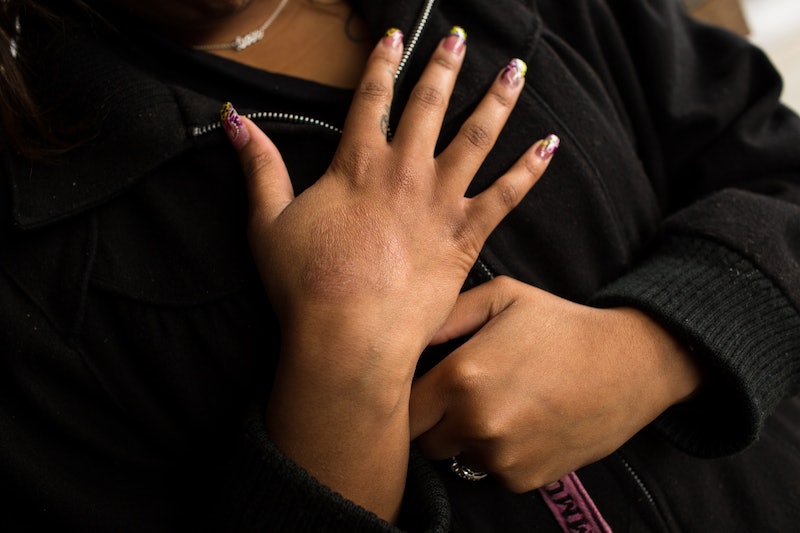 Maybe you're the kind of person who thinks of washing your hands regularly as one of those rules from growing up that it's fine to break now that you're an adult. I mean, you chew with your mouth open sometimes now and it has yet to bring about the end times, right? So what harm could dirty hands really do?

Or perhaps you are the kind of person who looks on with horror as the previously mentioned kind of person rolls of out of a restaurant bathroom without even making a one-second-long, just-for-appearances stop at the sink. You may also be the kind of person who thinks that people who don't wash their hands after touching germy surfaces are outliers, but I am extremely unhappy to report that you're wrong: according to a 2015 survey of 100,000 conducted by Initial Washroom Hygiene, 62 percent of men and 40 percent of women don't wash their hands after using the bathroom.

It would be one thing is this behavior was just another icky-yet-fairly-harmless personal habit, like engaging in the ol' "if it's yellow, let it mellow." But not washing your hands actually has very real (and very gross) health consequences — not just for the people who have decided to not wash their hands, but for everyone they and their germy fingertips come into contact with. Read on for four of the grossest things that can happen after you decide to just take your chances with dirty hands.

1. You Hands Get Covered In Millions Of Bacteria

Though you should wash your hands at many different points throughout the day — like before preparing or eating food, before treating a wound, or before taking out your contacts — we should get real and admit that this is mostly about the bathroom. Bathrooms are the places in our lives where bacteria really gather together to plot their next move — that's why the average person has 200 million bacteria per square inch on their hands after using the bathroom. Not to sound all alarmist — we're all pretty much covered in bacteria all day, every day, and not all or even most bacteria can harm you.

However, due to the, uh, specific nature of what goes on in a bathroom, the area is a hotspot both for bacteria to linger and for potentially harmful bacteria to be spread around. And shaking off the bacteria might be a bit harder than you thought — according to Harvard Medical School's Harvard Health Publications, you want to soap up your hands, and then spend at least 15 second rubbing them together before hosing them off. So think of how much potentially harmful bacteria may be clinging to your fingertips the next time you see that you're in the bathroom alone, and ponder just walking out the door without washing up.

2. You Touch Fecal Matter (Even If You're Not In The Bathroom)

Though we often think of bathrooms as the only place where making sure your hands are clean counts, we're not quite correct. Sure, a lot of the grossest bacterias out there, like staphylococcus, begin in the bathroom, and make their way out due to people who don't wash their hands after using the toilet. But once these germs are carried out of the bathroom, they go on to invade other arenas of our lives — like our wallets.

According to research compiled by the Metro (UK), 10 percent of credit cards and more than 16 percent of cell phones have fecal matter on them. And according to a 2002 study published in the Southern Medical Journal, 94 percent of dollar bills tested by researchers had pathogens on them, including fecal matter. And yeah, it's not our own fecal matter that is contaminating all these items (as we tend to not get sick from contact with our own poop) — we're touching other people's poop.

So if you pay for a hot dog with a dollar bill, then use that same unwashed hand to shove that dog into your food hole...well, you're likely consuming an extra condiment or two that you did not sign on for.

3. You Touch Bacteria From Days (Or Even Weeks) Ago

You may think that if a few hours have passed since you last touched that railing on the bus or office coffeemaker, all the germs on your hands have gone to Germ Heaven and you're free to stick them wherever without washing them. But you're wrong, friendo — viruses and bacteria can live for about 48 hours on most surfaces.

And when certain viruses come into contact with specific surfaces, their lifespans can be downright shocking — according to some reports, a flu virus can live on a dollar bill for over two weeks. So even if you get a $50 bill on Christmas and don't take it out until New Year's Eve, it could still be crawling with enough bacteria and viruses to ensure that you have a thoroughly unhappy new year.

Maybe, for whatever reason, you're still not convinced. "I'm an extremely busy person!" you're currently shouting at your computer. "I don't have time to stop and wash my hands!" We'll leave the question of how one can be too busy to wash their hands (but not too busy to deal with a virus) for another day, and instead focus on the fact that even if you can't be bothered to help yourself, washing your hands can count as performing a good deed for someone else.

According to a 2004 report by the BBC, the average office contains 20,961 germs per square inch, which we all pass back and forth via communal items like photocopiers, phones, coffee machines, and the aforementioned bathroom apparatus. By not washing your hands, you're helping every germ you come into contact with continue its Milo and Otis-style epic journey (only instead of trying to cross the country to reconnect with its family, these germs are trying to cross the office to give explosive diarrhea to everyone in Accounts Receivable).

So even if not washing your hands puts a little rebellious spring in your step — who's the boss now, Mom? — try to break the habit. If you feel like living on the edge, buy a lotto ticket or something.