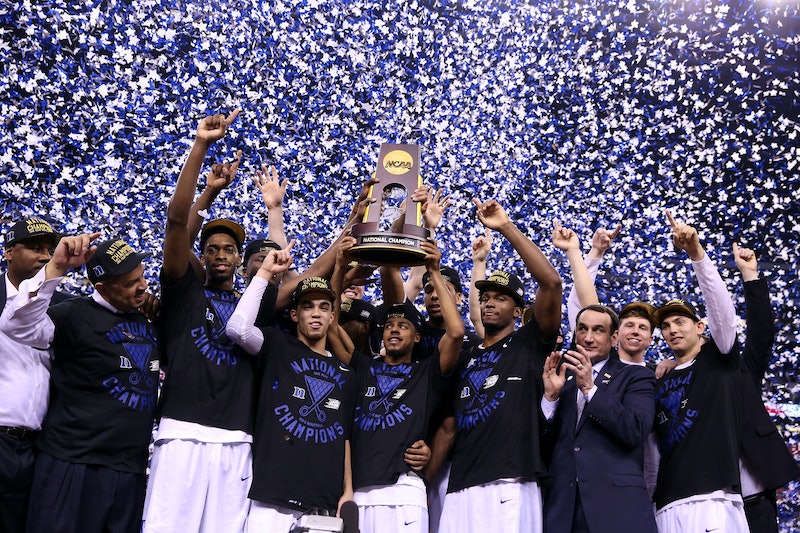 Ladies and gentlemen, the brackets are open for business, and the madness has begun. The NCAA Men's Basketball Tournament, otherwise known as March Madness, The Road To The Final Four, and the Big Dance, kicks off on March 15 with the first games of the 68 team single-elimination mayhem. But the Big Dance hasn't always been quite so big. If you take a look back at the history of March Madness, you'll find that the tourney has grown from a mere eight team invitational to the monthlong bubble-bursting, bracket-busting, and number-crunching event that it is in 2016.

Back in 1939, eight teams were selected to compete in the first ever NCAA Men's Basketball Tournament. The tournament lasted just 10 days, with the championship game played on campus at Northwestern University in Evanston, Illinois with little fanfare and definitely no television crews. The first college basketball games to be televised wouldn't be played until the following season when the New York City NBC affiliate broadcasted a double-header from Madison Square Garden in February of 1940, and the Final Four wouldn't hit the airwaves until 1963. The University of Oregon "Webfoots" as they were known at the time, led by senior captain Jimmy Hull, upset the Buckeyes of The Ohio State University to take home the first ever tourney championship.

An official with the Illinois High School Association named H.V. Porter was charmed by the single-elimination tournament format, and more or less immediately coined the term "March Madness" in the headline of an article he wrote in 1939. In 1974, sportscaster Brent Musburger picked up the nickname, and thus March Madness entered the age of television. By the time Musburger had popularized the March Madness moniker, the field had ballooned from eight to 32 teams, and throughout the '70s and early '80s, the NCAA steadily expanded the tournament field to include more teams, until 1985 when the number hit 64, where it held strong for 15 years.

Since the tournament format hit 64 teams, the Duke University Blue Devils have won the most championships, with five banners hanging in their rafters (shameless plug! Go Devils!!). But the all-time tournament victories will stay with the UCLA Bruins for some time to come, as legendary coach John Wooden led them to 10 of their 11 championships within the utterly dominant 11 year span between 1964 and 1975. If you're curious, the one year that UCLA did not win during that decade was in 1966 when they failed to make the field of 22 teams. Texas Western defeated Kentucky, coached by Adolph Rupp in the 1966 tournament championship — a story which was adapted into the 2006 film Glory Road.

The passion of the players and fans throughout the tournament has been captured in a montage to the song "One Shining Moment," which was first used after Bobby Knight's Indiana squad hit a buzzer beater to take down Syracuse in the 1987 championship game. With the exception of one year (2010), a Luther Vandross version of the traditional anthem has been used since 2003.

That's me with the very same Coach Knight that won it all in 1987, who was visiting his protégé and my coach, Mike Krzyzewski at Duke in 2011. Don't let the grouchy face fool you, he's actually a very personable dude.

Throughout the years, there have been upsets and predictable pitfalls, injuries, triumphs, blood, sweat, and tears. The one glorious thing that has never changed in the 77 years of March Madness is the single elimination format. Anyone can win just one game, which gives rise to Cinderella stories with unexpected underdogs who kept on winning just one more, busting brackets and teaching fans to believe that anything is possible when, as the song "One Shining Moment" begins — the ball is tipped.

Check out this infographic from WalletHub to see how 2016 is projected to stack up to history.