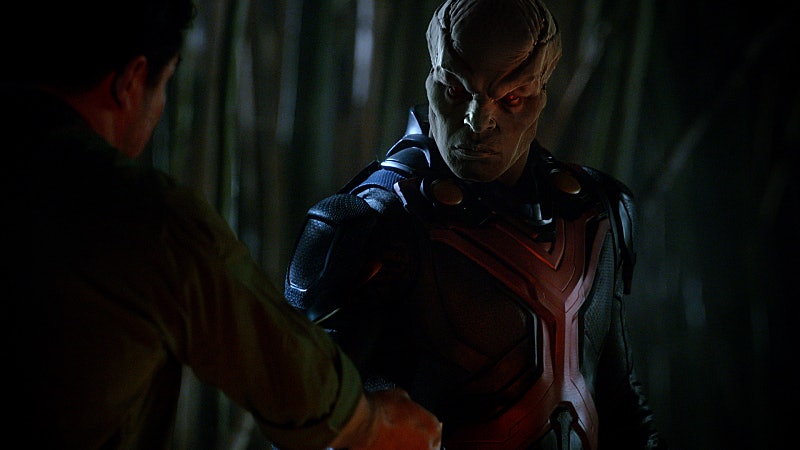 J'onn J'onnz might have one of the biggest guilt complexes I've ever seen on a superhero series — and yes, I'm including blind lawyer and Catholic vigilante Matt Murdock on Daredevil. A few weeks ago, he took the fall for Astra's death. On Monday, Hank revealed himself to be J'onn J'onzz on Supergirl and was arrested after saving National City from Kara's bout with Red Kryptonite. He is the DEO's latest acquisition in the glass prison cell, and it sucks!

He could have flown away, as Alex pointed out. He could have better explained what happened to the real Hank Henshaw. Though, to be fair, according to next week's episode title "Manhunter" and official CBS description, I think we'll be getting more of that story in flashbacks. Still — why let yourself get arrested? He clearly has some major demons.

Under the influence of Red Kryptonite, Kara asked him why he was so afraid to "come out" as an alien and be himself. He's more useful to the DEO that way, that's for sure. It's unfortunate that National City had to find out the hard way. It wasn't until Kara was threatening Alex's life that Hank transformed into J'onn and saved the day — only to be seen as a threat by the very coworkers he was fighting beside. Of course, he did it to protect Kara and Alex. They're a strong, weird, but cute little formed family in this world. Hopefully this is the start of something good on Supergirl and Martian Manhunter can start to take pride in who he is!