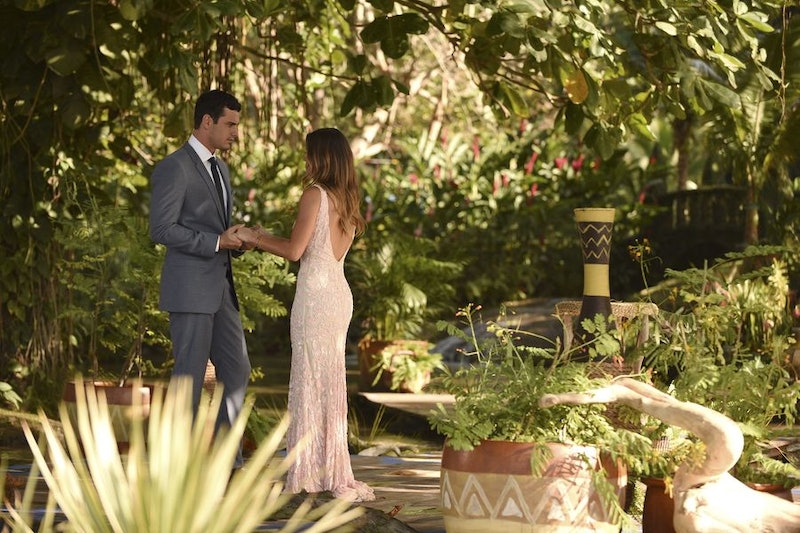 I'm not sure what I was expecting, but Monday night's Bachelor finale was an emotional roller coaster... and After The Final Rose wasn't much better. After Ben Higgins decided to propose to Lauren Bushnell instead of JoJo Fletcher, Ben's not-fiancée finally had the chance to confront Ben, and homegirl composed herself incredibly well. And, in the process, JoJo asked Bachelor Ben why he chose Lauren instead of her, and his reply was surprisingly honest.

At first, it sounds like a pretty loaded question, but it's an important one. As someone who didn't live it and just watched from home, the decision between JoJo and Lauren seemed pretty close, and since there weren't any red flags going up with either woman, it was pretty hard to tell what would make Ben choose one of them over the other. He had no problem answering the question, and the reason was pretty legit: When he pictured the person he couldn't live without, it was Lauren. The person he wanted to wake up to every day? Lauren. Simple as that.

And yeah, that had to be a little difficult for JoJo to hear, but probably less so being that she's now the next Bachelorette and has another shot at love coming her way ASAP.

In the end, though, it's obvious that there aren't any hard feelings between the two of them, and they both seem satisfied with the way things turned out. Ben gets to live happily ever after with Lauren, and JoJo is about to tackle a pretty huge adventure. Everybody wins, right?

Of all the dramatic editions of After The Final Rose we've seen over the history of this show, it's a nice change of pace to see things resolve so neatly. Maybe this is a signal of change in the franchise? Eh, probably not.