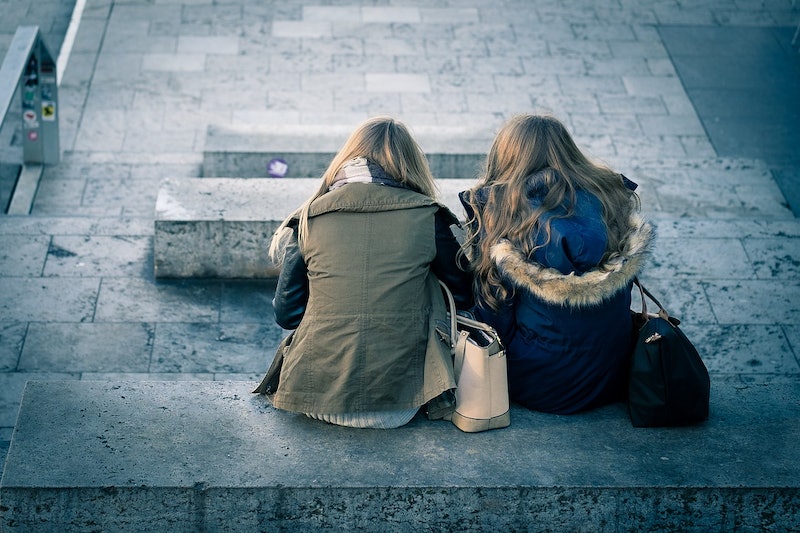 Not all friendships last forever. For me, it’s heartbreaking to even think about that, though I know it’s a reality. Sometimes the signs you’ve outgrown a friendship are really obvious, and other times less so, but regardless, they can be hard to come to terms with. For anyone else out there who are ever felt bad about having to let go of a friendship, know that you’re not alone in choosing to cut ties with certain people. The Daily Mail cited a survey by Microsoft MSN Messenger that showed people make about 400 friendships over the course of their lifetime, but only maintain a handful.

I’ve always prided myself on being able to hold onto long-term friendships, however as I’ve gotten older I’ve realized a couple of the friendships I had been clinging onto just didn’t make sense anymore. It’s very sad to think about, but we shouldn’t have to beat ourselves up over having to transition away from some friends. It’s part of life and growing up. I’m not saying you should wake up tomorrow morning and banish all of your friends because they’re getting on your nerves. However, if some of the bigger signs in this article resonate with you, it might be time to reevaluate a certain friendship or two, and to feel OK with doing so.

CNN spoke to Florence Falk, PhD, a New York City psychotherapist, who said, “As we gain a stronger sense of self, what used to matter no longer does, and we're bound to outgrow certain friendships. Once you're aware of that, without being cruel or feeling guilt-ridden, you can begin to let go of relationships that no longer nourish your most authentic self.”

Here are six signs you’ve outgrown a friendship, and why that’s OK.

1. You Don’t Have Many Things In Common These Days

Perhaps you and the friend in question met in college when you both only cared about scoring makeout sessions with your crushes and going out to parties. You quickly bonded, and didn’t take much time to notice your interests beyond that didn’t really align. Then, post-college when your social life started to naturally slow down and you both began working full-time jobs, you started to drift more and more. Now, you realize you have next to nothing in common. According to Madame Noire, this lack of common interest could be something as little as your taste in music and TV. If none of your interests these days are the same, the outlet noted this might mean the two of you are on totally different pages. Just because you once were inseparable doesn’t mean it makes sense for you to be at this later point in life.

2. You’ve Run Out Of Things To Talk About

Similarly to how you and your friend may no longer have very many things in common, another sign you’re outgrowing a friendship could be that you genuinely don’t have much to talk about these days. This realization happened to me recently. I met up with an old friend for coffee and it seemed like all we could hear were birds chirping. After a while, it got so uncomfortable, I chugged down the scorching hot drink and made an excuse about why I needed to leave. The Daily Mail talked about this hint a friendship is creeping towards an end, and the author said she experienced this same phenomenon — her and a long-term friend got together and had nothing to talk about. According to the outlet, it could become more obvious that you have nothing to talk about with this friend if you find yourself trying to change the subject over and over in hopes of reaching a middle ground. Again, if things feel super forced between you and your friend, it might just mean you’re growing apart, and this is more than OK.

3. Your Friend Has Betrayed You In A Big Way

This is one of the most clear signs it’s time to let a friend go. Has this person betrayed you in a significant way? This could mean they spread a rumor about you, told a deep, dark secret you’d shared with them, stolen money or other possessions from you, started dating your ex or someone you’re interested in, or really anything terrible that’s done behind your back, according to Prevention. Prevention noted having a friend betray you in a big way like this can be really hard to come back from, as you might not ever be able to gain their trust again. You should look closely at whether you think the relationship is worth salvaging, and if not, it’s time to cut ties. Do you really want a person like this in your life?

As we get older, it’s a sure thing that our lives will take different directions from our friends, and sometimes this won’t manage to drive a wedge in the friendships. However, if you and your long-term friend are now leading totally different lives — maybe you’re married and pregnant, and she’s still single and bar-hopping every night — and aren’t expressing any interest in keeping up with what’s happening in the other person’s life, it could mean you’re slowly outgrowing each other. According to Essence, when it comes to maintaining friendships, you must “want to” versus feeling like you “have to.” Long-term friendships can be difficult to maintain if there isn’t a common bond to bind you together, like starting families at the same time, or living in the same town as adults. Essence said we shouldn’t feel guilty about growing in our own way, even if that means growing apart from our friend. We just need to focus on being

5. You’re Only There For Each Other In Good Times

I have dozens of friends who are there for good times, and that’s pretty much it. I plainly call them “good time friends.” However, when it comes to the more substantial relationships in our lives, it’s only natural for us to want more out of them. With age I’ve become aware of the actual purpose of having a close friend, and that’s to have someone to be there for you when you need them — whether that’s in times of good or times of bad. Vise-versa, I know I need to reciprocate. I make it a point to be there in bad times for my close friends no matter what. If I notice those people are consistently not there for me for the big things in my life, after a while I have no choice but to fade them out. Why? The reality is that there are plenty of people out there who are capable of and want to be there for everything that happens in your life, so those are the friendships we should focus on.

In these cases, fading someone out shouldn’t make us feel bad, in fact it might make us ultimately feel good. According to Psychology Today, we should be open and honest with these people about our feelings and avoid beating ourselves up over having to let them go. The outlet said to continue to remind yourself that not all friendships are built for the long haul, and that’s OK.

This is a less obvious sign of outgrowing a friendship, as you might not have even realize you’re doing, but if you tend to say “no” to invites to spend time with a certain friend, there may be a more subconscious reasoning. According to Huffington Post Canada, you might start noticing you’re falsely noting you already have plans, or politely declining the invitation without any rationale at all. It could ultimately mean that deep down you have changed, or perhaps they have changed, and the changes are so significant that it makes hanging out with the friend a completely different experience than it used to be.

Ultimately, if you feel some of these signs are hitting very close to home for you, you should evaluate whether you think there is a way to salvage the friendship, or if you even want to. If not, don’t let yourself feel guilty about the fact that you and your friend have outgrown each other. As we discussed, it’s all part of growing up.