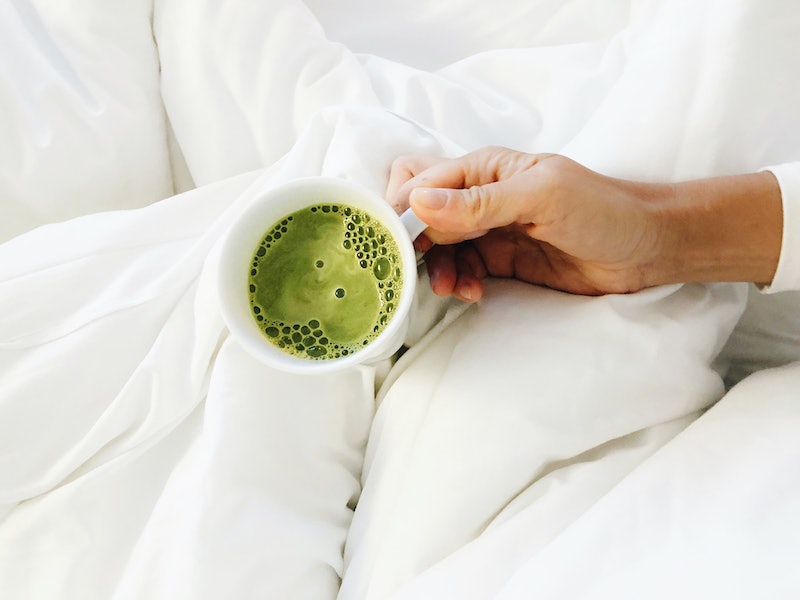 I was recently given a small promotional pouch of matcha tea after a pilates class, at which I rolled my eyes because I knew matcha to be the buzziest new buzz in health trends, and you know how that goes. Someone who "swears by" matcha tea is bound to corner you at what would otherwise be a fun party on the weekend and talk your ear off about how "ahmazing" it is. But I took the tea home and tried it, and now I guess I am that person at the party. The one talking, not the one trying to get away. As it turns out, matcha tea is really delicious. And, looking into it further, it really has all the super-food qualities that make people scream "Kale!" from the rooftops.

If you're a tea drinker, or even if you're not (maybe you need to replace your third, fourth, fifth, sixth or seventh daily cup of coffee with something more healthy), matcha is going to be your new go-to drink. Matcha, if you're not quite on the same kick yet, is a premium green tea in powder form from Japan. It's made from stone ground tea leaves, so drinking the tea is essentially like eating the leaves, giving you the full health benefits of that without you having to actually eat leaves (because you're not a koala, right?). It can be used in cooking as well as tea, but tea is definitely the easiest and quickest way to get matcha in your diet. Here's why you should start guzzling that matcha tea:

1. It's Got Lots Of Antioxidants

One cup of matcha is said to have the same antioxidant level as drinking ten cups of brewed loose leaf tea. Antioxidants make your skin glow, keep your insides fresh, and have anti-aging effects. Because of the way matcha is made, you're not missing out on ingesting any of the vitamins, minerals, antioxidants, and amino acids in the tea, the way you do when it's filtered through a bag or sieve. Matcha tea is apparently where the antioxidants are really at.

2. It Will Save You Tea Bag Waste

If you want to be a little more environmentally conscious, most matcha tea can be bought in a recyclable paper bag, and you scoop it into your cup with a spoon (which you wash, not throw away!). So no more tea bag waste! It might seem like a small contribution to the environment, but every little bit counts.

3. It's Got Cancer Preventing Properties

The Journal of Chromatography A published research that found matcha tea has three times the amount of epigallocatechin gallate, or EGCG, as brewed green tea. To put that in more human terms: EGCG is a catechin, and catechins fight cancer as well as other viruses and heart disease. So drinking matcha tea rather than regular green tea is a really good way to boost these cancer fighting antibodies inside you.

4. It Has A Calming Effect

Matcha tea has something called "L-Theanine " in it, which has a relaxing effect, but doesn't cause drowsiness. As well as assisting in memory and concentration (more on that below!), matcha tea is often used in relaxation rituals like meditation, as the L-Theanine is said to promote a clear mind.

5. It Boosts Your Immune System

We already know that matcha tea has many cancer fighting properties, but it's also good for your overall immune system. The high levels of EGCG in matcha are key, and can help in the prevention and management of Type 2 Diabetes, as well as promoting cardiovascular health.

6. It Can Help Memory And Concentration

When you're feeling the afternoon lag you probably reach for a cup of joe, but matcha also has properties that will enhance your alertness when you're faltering. David Mandelbaum and Jessica Lloyd, co-founders of PANATEA, a matcha company, say that even though matcha only has 34 milligrams of caffeine, high levels of amino acids like L-theanine can boost energy levels (it promotes the brain's release of serotonin and dopamine) without any of the caffeine come-downs associated with coffee.