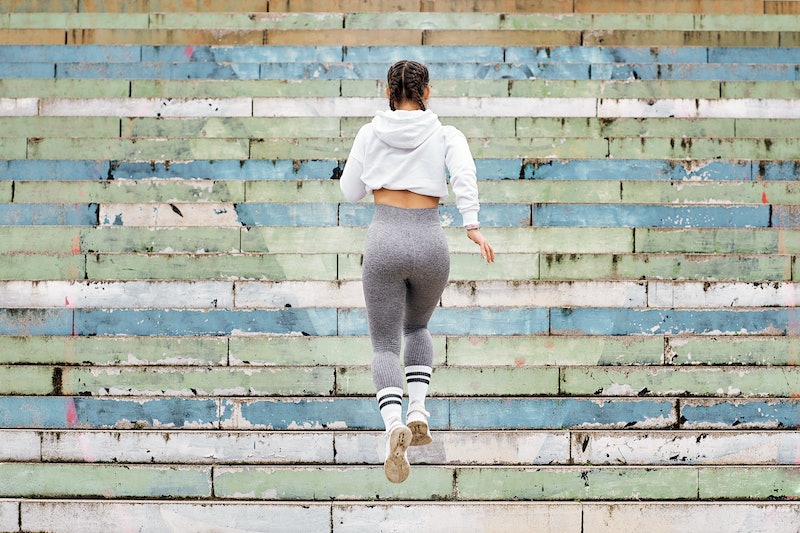 If you've ever had a panic attack, then you know all too well that sense of gripping fear and impending doom that foreshadows a freak out. This terrible feeling is the cornerstone of panic disorder, and leads to a few minutes of absolute horror and dread. But despite how bad it feels, it is possible to calm yourself down and ride out the panic until the attack is over.

And yet, as someone who has had the joy of this experience, I know coping with it is way easier said than done. Because like I said, panic attacks truly make you feel like you're dying. Not to mention the long list of other symptoms, which include a choking feeling and difficulty breathing, a racing heart with chest pain, shortness of breath, sweating and dizziness, nausea, tingling, and a fear that you may lose control, according to WebMD. It's not a fun time, to say the least.

Panic attacks can become quite the problem for sufferers, especially since they often strike without warning. You could be walking along merrily when suddenly the street gets all wobbly. Or maybe you're sitting at work when the room starts to spin. And the worst thing? The attacks aren't necessarily triggered by anything scary, which makes the disorder all the more nerve-racking.

In fact, scientists don't really know what causes this extreme reaction. It could be any number of things, from family history, to substance abuse, to big life stressors, and even abnormalities in the brain that make it difficult to regulate the fight-or-flight response.

While most attacks only last about ten minutes, it's still in your best interest to figure out how to reign them in. If you've been struggling with this less-than-thrilling condition, then here are some calming tips (besides just breathing) to keep in mind the next time panic strikes.

1. Name All Your Feelings

There's something about a panic attack that closes your brain off to pretty much everything. When you're in the midst of one, the only thing that's real is the terror itself. You can't really see or hear or focus on anything other than how bad you feel. (Scary, I know.)

That's why, if possible, you should try to force yourself to think of something else. As James Gummer noted on TinyBuddha.com, one of the best ways to do this is to start naming your feelings. "In the midst of the panic attack, I focus on any feelings or thoughts that are arising and name them either out loud or silently to myself. I sometimes even grab a notebook and write them," he said. This may include jotting down things like "I feel tightness in my chest," or "I feel embarrassed when this happens." It can help you snap out of the blinding physical sensations, and bring your head back to reality.

2. Move Around In Relaxing Ways

The tendency during a panic attack is to curl up into a little ball, or pace around frenetically. These motions kind of feed into the panic, as body language signals to the brain that something is wrong. So switch things up, and start to move in ways that feel relaxing and carefree, suggested Richelle DeVoe on HuffingtonPost.com. This might mean striking a few yoga poses, or doing something ridiculous like skipping around the room or engaging in interpretive dance — anything that can jog your brain free of panic.

You might even want to take it up a notch and do some aerobic exercises. As DeVoe noted, "... the last thing I want to do when I'm having a panic attack is to exercise or move my body. But one of the most effective ways to show my brain that I'm okay is to do exactly that ... Not only has aerobic activity and exercise been shown to have immediate anti-panic affects, it has also been shown to have long term anti-anxiety affects." So pick yourself up and start moving as much as you can.

The next time you feel panic setting in, start counting your sensations. As Anna Borges suggested on BuzzFeed, "Count five things you can see, four you can touch, three you can hear, two you can smell, and one you can taste." This is another distraction technique that requires you to focus in on things that are real — like the sounds in the room, or the feeling of your shirt against your skin — instead of just the panic in your mind. It's also a good trick to use when you're cooped up on a plane, or stuck some place where skipping around and dancing might attract undue attention.

Some people find success distracting themselves with tactile things, Borges noted. So get in the habit of carrying around something fun to play with, such as a stress ball or Silly Putty. The squishier, softer, or crinklier the better.

Chewing gum is a well-known anti-anxiety technique. I've given it a try, and I gotta say there is something about gnawing away on some minty goodness that is very soothing. That's because any repetitive activity can help distract the mind and re-focus attention, as noted in an article from McGill University. So pop some Bubblicious and get to chewing.

When I first heard of these, I had no idea what it meant. Spinner ring? What? But it turns out, that's exactly what it is — a ring that spins. The idea is you wear the ring, which has moving parts, and then turn and spin it when anxiety rears its ugly head.

According to an article on CalmClinic.com, "Spinner rings are designed to be fiddled with. They're a healthy, less obvious way to move your hands when you feel that you need to be fidgeting. You simply spin the center ring with your fingers and take deep breaths to experience a calm, more meditative state." Pick one up, and see if your pesky anxiety melts away.

Sometimes none of the above techniques work, and you find yourself fruitlessly naming feelings, or pawing at a wad of Silly Putty. When that happens, all you can do is accept that the next ten minutes are going to be kind of sucky, and simply let the anxiety wash over you.

And often, that's really the best thing you can do. According to Gummer, "One of the most powerful things that you can do in the midst of a panic attack is to accept it ... Accept that it’s there. Feel it completely ... Yes, it can get pretty nasty. But usually at the point when I feel like my whole being is going to explode from so much anxiety, something almost unimaginable happens: a release." That's because panic doesn't last long. It's important to remember that it'll be over soon, and that you will survive.

While panic attacks feel pretty awful, they aren't actually life threatening. So the next time you feel one coming on, try your hardest to channel the nervous energy elsewhere. In the best case scenario, you'll stop the panic in its tracks. In the worst case, you'll spend some time distracting yourself (and dancing around) until the panic fizzles out on its own. Either way, it will end, and you'll be able to go on with your day. I promise.

More like this
5 Crystals To Manifest Better Sleep
By Megan McCarty
6 Abortion Advocates To Follow On TikTok
By Sara Youngblood Gregory
An Honest Review Of Apothékary's Stress-Reducing Superfood Supplement
By Leah Groth
The 8 Best Professional Manicure Tools, According To A Nail Technician
By Mackenzie Edwards and Danielle Calma
Get Even More From Bustle — Sign Up For The Newsletter