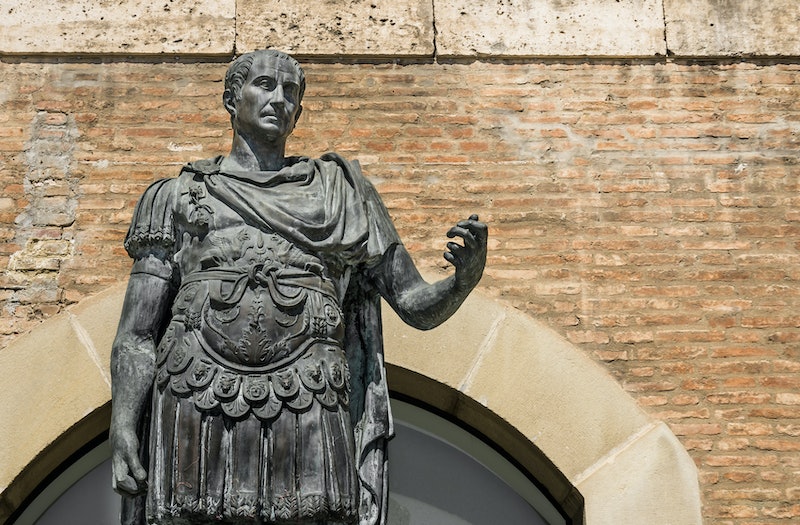 Beware. Bewaaaaaaaaarrrrrrrrre. It's the anniversary of Julius Caesar's death, and — even though 44 B.C.E. was more than 2,000 years ago — we're all still bewaring the ides of March. But what exactly does that even mean, "beware the ides of March"? And just what is a book nerd to read if she wants to commemorate this auspicious occasion?

For starters, the ides of March is a reference to the old Julian calendar, which used the middle days of each month to calculate other dates. March has 31 days on both the lunar and Gregorian calendars, so I really can't explain why the ides of March falls on the 15th day of the month and not the 16th, but it does. Go figure.

Our modern fascination with the ides of March — and only March — comes from Shakespeare's 16th century play, Julius Caesar. In the play, a soothsayer comes forward in the middle of February to tell Caesar that he should "Beware the ides of March." A month later, on March 15, Caesar is stabbed to death by the members of the Roman Senate, which is a lesson in listening to creepy mystics who give you cryptic messages involving the word "beware."

Speaking of "beware," if you're looking for some quality, ides-of-March-worthy reading material, check out the five books below.

When Phin runs into the infamous swamp near his Sticks, Louisiana home, he's never heard from again. A girl named Lenora May takes his place, and no one in Sticks remembers him, except for his sister, Sterling, who sets out to learn the secrets of the swamp in this creepy debut novel from Natalie C. Parker.

"Beware the Kitten Holy" is an anagram, but, like the intrepid campers at Miss Qiunzilla Thiskwin Penniquiqul Thistle Crumpet's Camp for Hardcore Lady Types, you'll have to figure out that puzzle for yourself.

At the risk of dating myself, I have to say that I absolutely loved Carolyn Meyer's Young Royals series when I was a pre-teen. Beware, Princess Elizabeth centers on a teenage Elizabeth Tudor as she endures a stay in the Tower of London at the pleasure of her half-sister, Queen Mary I.

4. Beware That Girl by Teresa Toten

Kate O'Brien is going to change her stars and get into Yale, and she has a plan to do it. The first step was getting into NYC's Waverly School. The second, befriending the vulnerable and ultra-rich Olivia Sumner. But when a new member of Waverly's brass threatens Kate's future, she's forced to confront her moral limits.

5. Beware the Sheep by M. Lewis-Lerman

This YA fantasy from M. Lewis-Lerman follows Livi, a 16-year-old girl pushed into the role of heroine by her friend's mystery illness. In her cross-country quest for a cure, Livi encounters old magic, strange creatures, and an evil Shepherd.