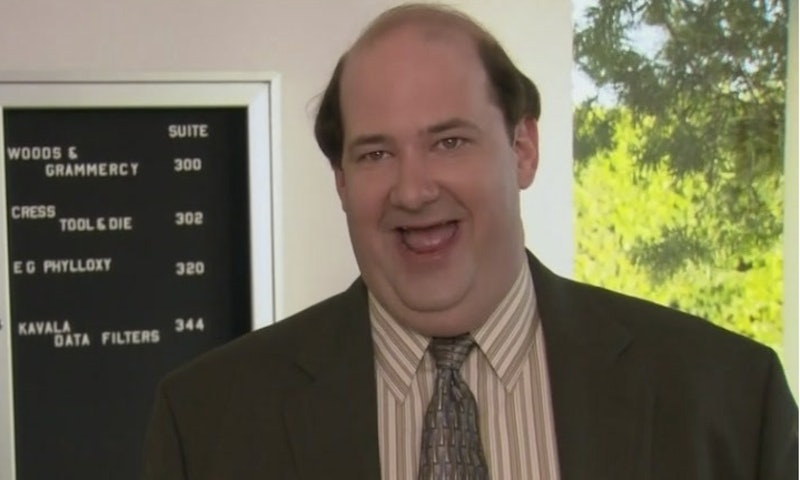 Throughout the 2016 election cycle, Ted Cruz has been called many unfavorable names and been compared to many unsavory people (and other creatures): the Zodiac Killer, Grandpa Munster, or, as Saturday Night Live called him, a "nasty little weasel." Perhaps, the most favorable comparison that the Texas senator can claim is to the somewhat obnoxious but still lovable Kevin from NBC's The Office. But after a side-by-side shot of Cruz and Kevin went viral, what does Brian Baumgartner, The Office's Kevin, think of the Cruz comparison?

"At least what I tell myself, and what I do genuinely believe, he [Cruz] really resembles Kevin as opposed to me," Baumgartner tells Bustle. "I'm not delusional." Baumgartner explains he changed his entire physical expression and stance when he played Kevin for nine seasons on the beloved, Emmy award-winning sitcom. "I think Mr. Cruz has this similar sort of resting face, there's a sort of droopiness on one side of his mouth," Baumgartner says, but that's a similarity the Republican presidential candidate shares with Kevin, not him. "I created a character whose walk is different from my walk; his standing posture, his normal expression are different from mine."

But Baumgartner (who recently appeared in the History Channel's The Crossroads of History) admits it's not all Kevin. "I remember the first time I saw it. I was on Twitter, and I looked at my picture in the corner of the Twitter profile, which is my normal picture. ... I mean I certainly see the similarities," he says, noting that the photo he usually sees compared to Cruz is "what I would call one of the Kevin faces, with the kind of side mouth, curl thing."

While Baumgartner says the physical similarities between Cruz and Kevin had been mentioned to him earlier in the election, he hadn't thought much of it. "Then, I woke up the morning after he won Iowa to about a hundred text messages — all people, of course, thinking they were bringing it to my attention for the first time," he says. "That was when it sort of became... maybe I shouldn't ignore it any longer."

Different examples were sent to Baumgartner, but standouts were the photo and video of a side-by-side comparison poster of Cruz and Kevin being held at a Cruz rally in South Carolina (filmed for the Donnie Does YouTube channel and included below). "The video of him [Cruz] seeing the guy [holding the poster] and the look of 'oh gosh give me a break' look on his face really made me laugh," Baumgartner says. That moment, for those interested, is right around the 1:11 mark.

And Baumgartner has gotten in on Cruz-Kevin meme fun, sharing it with fans on Twitter and Instagram with the caption, "Well played, protester at Ted Cruz rally. Though to be fair, you are insulting Kevin's intelligence by the comparison."

In case those remarks didn't make it clear, Baumgartner is not for good old TrusTed this election. "I think it's fun. I think it's funny. I certainly have a sense of humor about it," Baumgartner says when I ask about the Cruz comparison, but he adds, "I'm not a supporter of his, so in that way, it makes it a little less feel-good than if it were someone I actually supported."

Gun control is one of the big issues that repels Baumgartner from Cruz. "Kevin wasn't exactly known for his smarts. I was having fun [with his Instagram post], but I have a really, really difficult time with Mr. Cruz's stance on guns," Baumgartner says. "I feel like he tries to paint any sort of gun control like 'that side is going to take away all our guns.'" Baumgartner also cites a specific quote from Cruz (one that Cruz said at the formation of his Second Amendment Coalition): "What keeps us safe is that we are free people who have the God-given right to protect our homes and our families and our lives."

"I have a really hard time with people who tell me what God intended or what God believed," Baumgartner says. "That makes me crazy beyond anything else." Baumgartner also thinks this quality in Cruz — this claim to know what God thinks — is what makes him so different, personality-wise, from The Office's Kevin.

"As daft as Kevin was, I don't really think he would ever pretend to speak about what God intended or what rights God gave us on this earth," Baumgartner says.

As for which candidate is getting his vote, Baumgartner won't officially say — though he implies he is feeling the bern. "I think Bernie Sanders is a really important voice. I think very similarly in line with him politically, but I'm not fully prepared to endorse him," Baumgartner says.

He's more emphatic about (probably) not voting for the GOP candidate. "I'm not necessarily tied in with one party or one specific voice... but I just don't see anyone on the right, right now, who is worth giving vote, too."