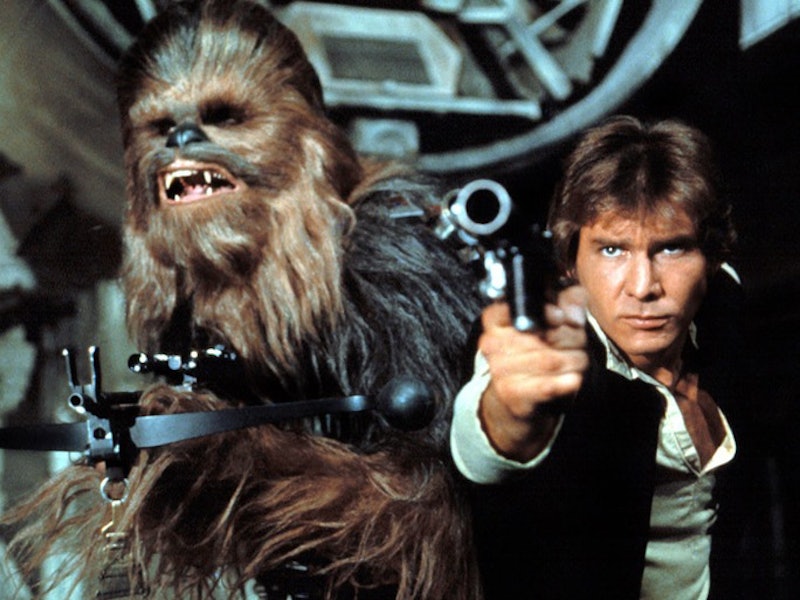 Big news, Star Wars fans: The super hush-hush casting search for a young Han Solo for Disney's upcoming stand alone Star Wars spinoff has been narrowed down to three actors, according to The Hollywood Reporter. Per the site's report, on Tuesday, several sources reported that three actors had screen-tested to play a young, swaggery Han in the prequel film: Alden Ehrenreich, who starred in the Coen Brothers' most recent movie Hail, Caesar!; Jack Reynor, from Transformers: Age of Extinction; and Taron Egerton, the star of The Kingsman and Eddie the Eagle.

Of course, this news has fans reacting with a lot of emotion. (Though, for some reason no one is wondering who will play a young Chewbacca — that's an important question too, guys!) Firstly, some are wondering why certain names are no longer apart of the list. After all, according to Variety, a previous shortlist of actors for the Han Solo spinoff included big names like Miles Teller, Ansel Elgort, and Dave Franco, but none of them broke into the top three. And judging by Twitter, some fans really wanted Elgort — the star of The Fault In Our Stars and the Divergent series — to nab the part of young Han.

That's not to say others weren't excited about THR's reported shortlist: Egerton, in particular, got a lot of love.

Then, others wondered by Anthony Ingruber, a Harrison Ford lookalike who actually does a great impression of the actor, wasn't being considered. Ingruber played a younger version of Ford in The Age of Adaline — and there's even a YouTube clip of him doing an amazing impression of Han Solo:

Of course, I'm sure whoever is chosen for the role of young Han will do a great job with it — and it's only fair to reserve judgment until the role is actually cast and the film is produced. Good luck to everyone in the running!