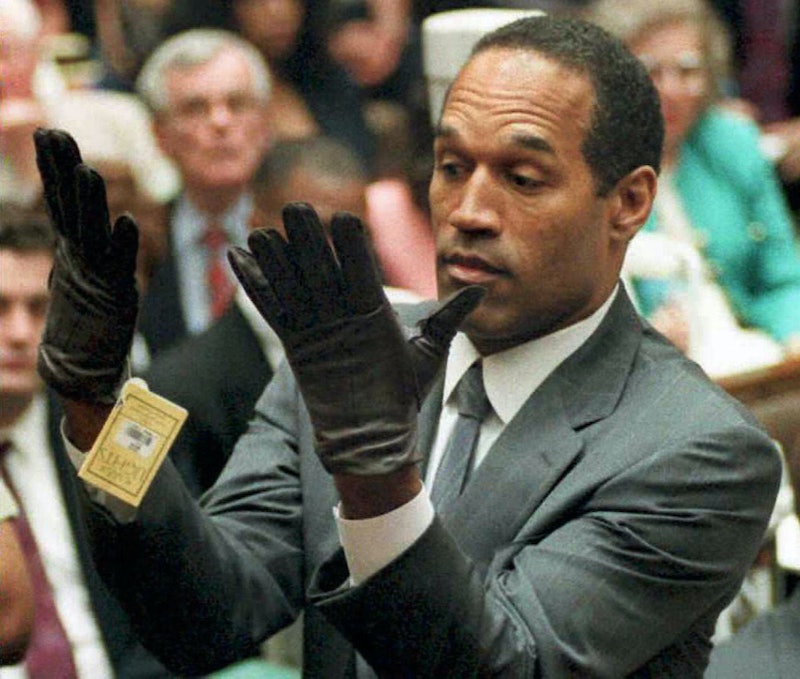 It’s the scene that everyone has been waiting for in this season of American Crime Story — just like it was the moment that everyone waited for back in 1995 when O.J. Simpson was on trial after being accused of murdering his ex-wife Nicole Brown Simpson and restaurant waiter Ron Goldman: The video of Simpson trying on the gloves that were found at the scene of Nicole and Goldman's murder. After an incredibly long trial that had the entire nation glued to their television screens, the moment was one that will go down in history.

In a pivotal moment in the case, Simpson stood in front of the jury and appeared to struggle to fit the gloves in question from the crime scene on his hands. But this moment is nothing without the extensive context of the state’s case against Simpson, which included multiple accusations of police tampering and racial bias on the part of the police who collected the evidence at the crime scene. (In fact, the accusations were so intense that Mark Fuhrman, the ex-detective responsible for collecting the bloody gloves from the crime scene, pled the fifth when asked if he planted or manufactured any evidence in the case.)

So, to say that it’s hard to watch this video without taking all of those things into consideration is an understatement. Because the moment Simpson tried on the gloves happened not only during a murder trial, but also during what became a larger conversation about race, police brutality, the privilege of celebrity, and America's judicial system.

For most viewers watching the trial at home, there was so much more at stake than simply whether or not Simpson was guilty. Whether you believed that Simpson was guilty or that he was innocent of any wrong-doing, this was a lengthy case in which everything was questioned — from the brand of the gloves to the hobbies of the man who collected them at the scene of the crime. So, this moment in which Simpson tried on the gloves was an important one.

Toward the end of this compelling video, you can see Simpson mouthing “they don’t fit” — the famous words that Johnnie Cochran, Simpson’s lead defense attorney, would later recycle in his closing arguments. “If it doesn’t fit, you must acquit,” Cochran infamously said on September 29, 1995 before leaving the jury to make their final decision in the case. For those not familiar: Less than four hours later, the jury returned with a verdict of not guilty on all counts.

Whatever your thoughts on the Simpson case, what’s abundantly clear is that this moment when he tried on the gloves in the courtroom was critical in the defense’s case.