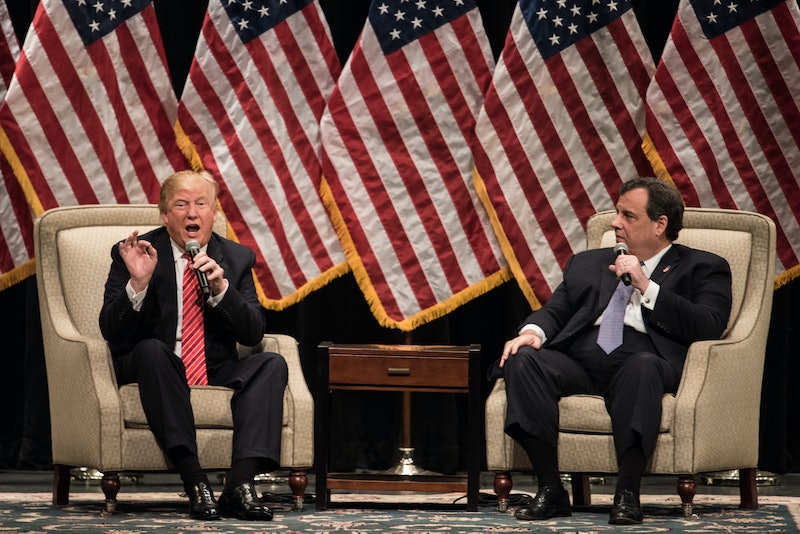 Poor Chris Christie. The New Jersey governor sure is getting a lot of flack for his visible support of GOP frontrunner Donald Trump, to the point that he has had to address his very presence with the Donald. Though he's made it clear that he is but a mere endorser of the candidate, Chris Christie just might be Donald Trump's sidekick. And based off of recent public statements, it sounds like he's kind of low-key accepted his role. He has yet to choose a sidekick name or reveal the Donald's superhero persona, though he did have this to say when addressing reporters at the expanded HelloFresh facility in Linden, New Jersey on Tuesday:

No, I don't feel like a sidekick. You know, I'm an endorser of someone for president of the United States and if that makes you a sidekick in your world, that's OK by me. But that's not what I would see myself as.

Christie also chose to address the recent controversy surrounding him appearing to be left out in the rain at a recent Trump rally in Columbus, Ohio. He was stuck without an umbrella, yet supporting the Donald just the same. The governor stated that he was offered some protection but simply didn't want an umbrella, proclaiming he's simply not an "umbrella user."

Christie's lack of coverage from inclement weather has so far been the least bizarre plot point in the curious love fest between himself and the GOP frontrunner. A former presidential hopeful himself, Christie became the first former candidate of this election season to endorse someone still in the running when he held a Texas press conference last month to proudly put his support behind the Donald.

Christie was then seen mere days later delivering the most underwhelming introduction speech to what would become Trump's Super Tuesday victory address. His lingering presence became the very fodder for memes and jokes, producing the best gif of the primaries and caucuses so far. Social media reactions to Christie's proclamation — that he's not really a sidekick — have been fairly predictable in their skepticism.

NJ.com has taken that whole sidekick thing even further and compiled a list of political cartoons poking fun at Trump and Christie's current political relationship. Needless to say, the images drawn by editorial cartoonists and artists certainly say a lot about the way the American public see Christie.

Given the high stakes of Super Tuesday 3, it's undeniable that the voting public will once again be met with a looming Chris Christie taking the stage near Donald Trump at the Mar-a-Lago, where the Donald is set to speak at around 9 p.m. on Tuesday night. Christie's appearance could give us a brand new gif to constantly replay as he cringes through yet another Trump speech. One thing is certain, however: no matter how disinterested Christie may act, he can't seem to fight his sidekick designation.