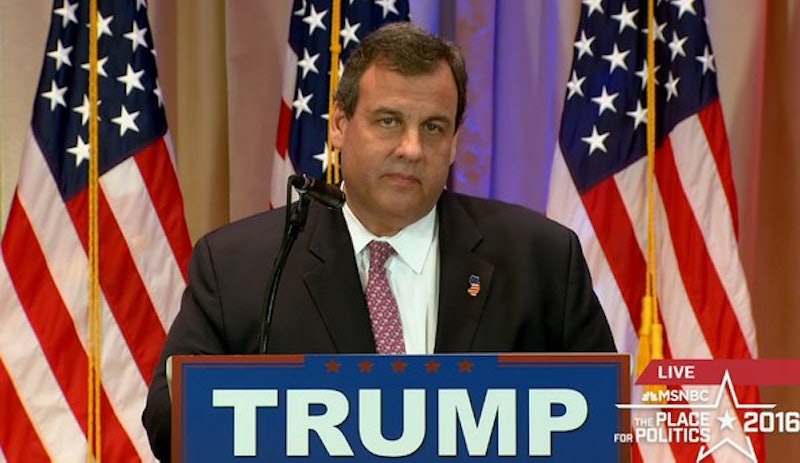 It seems that all anyone can talk about as Super Tuesday comes to a close is Chris Christie's face as he introduced Donald Trump for his victory speech. Though Christie formally endorsed Trump last week — before he swept all but two states on Super Tuesday — he looked like anything but a happy camper Tuesday night. (See above.)

Trump, on the other hand, was quite happy, no acting necessary — besides, perhaps, the apparent graciousness. "Chris, thank you very much I appreciate it," the Super Tuesday winner said. This has been an amazing evening already. We have won five major states and it looks like we could win six, seven, eight nine. It's really pretty great," Trump said.

Obviously, this is all hilarious in the most awful of ways, like a car accident you can't look away from ... and that may very well also wreck your car come November. And because most of us would rather not think seriously about a grim political future ruled by a serial misogynist, the hashtag #ChristiesThoughts started trending on Twitter.

Predictably, while most of the tweets were fat and Jersey jokes that missed the mark, some of them were pretty funny. Tell us, Twitterverse, what was he thinking?

Because we can't always agree on an exact hastag, #ChristieThoughts was trending as well.