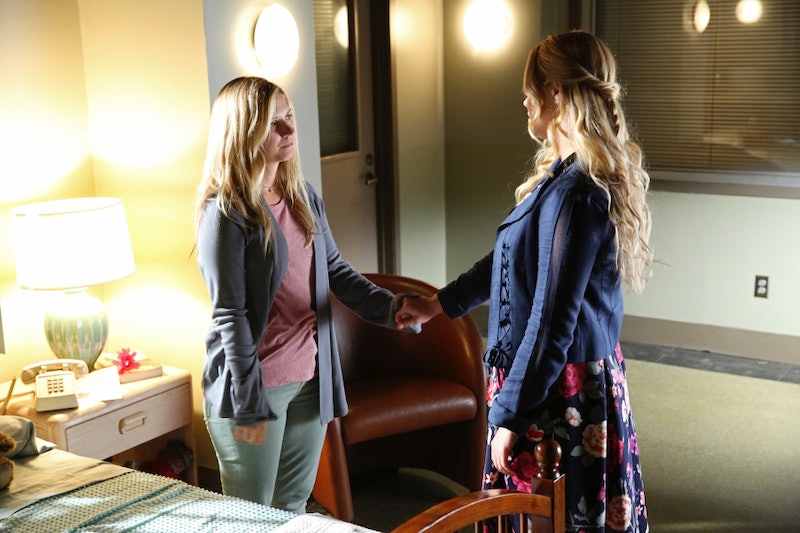 Will the secrets never end for the DiLaurentis family? I really — and possibly naively — thought that, after the Charlotte reveal, we were done with DiLaurentis family secrets. But, as it turns out, that's not the case at all. During Tuesday night's Pretty Little Liars Season 6 finale, the series revealed that Charlotte was actually adopted by Kenneth and Jessica because her birth mother — Mary Drake — was a patient at Radley when she was born. And, surprise, surprise, Jessica DiLaurentis and Mary Drake are twins on Pretty Little Liars and Mary has a major chip on her shoulder about her family.

Just when we thought I. Marlene King couldn't shock us anymore, she turns around and pulls a stunt like THIS. Not only is Mary a former patient of Radley, Charlotte's mother, and Jessica's twin sister, but she's also been working with Rollins to put Ali safely in a psychiatric facility so that she could take control of the DiLaurentis family fortune. How freaking long has all of this been going on? Is she the mystery person who killed Jessica? What exactly did Kenneth and Jessica do to her that's left her so angry with her entire family? There clearly is absolutely no end to the mysteries of Pretty Little Liars. But, the biggest question regarding Mary at this point is whether or not Charlotte actually knew her mother while she was also a patient at Radley during her teenage years, and why someone went out of their way to hide her file so completely.

If the two were both in Radley at the same time, would Mary not have tried to get to know her daughter? From her conversation with Rollins, it almost seemed like she and Charlotte had a relationship of some kind before her death — or did all of her information about her daughter come from her relationship with Rollins?

For everyone who complained about the big Charlotte reveal during the midseason finale, I think we finally got what we were looking for. There's something seriously dark and twisted going on with Mary and her vendetta against the DiLaurentis family and it looks like it'll only get darker.

For more PLL theories, subscribe to Bustle's podcast Taking This One To The Grave.