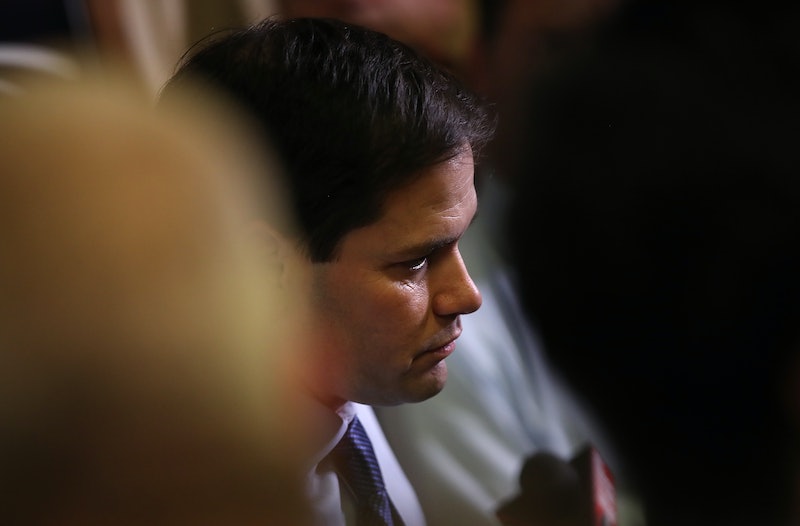 Politicians aren't known for steadfastly keeping their promises. But it may be even less common for citizens to feel sad for a politician who failed to keep his word, instead of hurt by it. After losing (pretty badly) to Donald Trump in his home state of Florida's primary election, GOP presidential candidate Marco Rubio was forced to make clear that living up to his promise of victory just wasn't in the cards. That wasn't all, though. Here's the transcript of Marco Rubio's dropping-out speech, because the Florida senator had a lot to say in addition to his end-of-campaign announcement.

There were hints of a campaign suspension even at the start of the speech, which he made at his Miami headquarters:

We had a great team. We have a great team. And I'm so grateful for all the help that you guys have given us. I just want you to know there's nothing more you could have done.

The now-former candidate wouldn't get to calling it quits for real just yet, though. There was too much to hash out with citizens first on the future of the Republican party:

America's in the middle of a real political storm, a real tsunami, and we should have seen this coming.

This nation needs a vibrant and growing conservative movement, and it needs a strong Republican party to change the direction now of this country, or many of the things going wrong in America will become permanent and many of the things that make us a special country will be gone.

America needs a vibrant conservative movement, but one that's built on principles and on ideas, not on fear, not on anger, not on preying on people's frustrations.

And it wasn't until Rubio got all those sentiments about the state of politics in the U.S. out of his system that he finally dropped a news bomb on the nation by subtly mentioning that he would be suspending his presidential campaign:

But after tonight, it is clear that while we are on the right side, this year, we will not be on the winning side. I take great comfort in the ancient words which teaches us that in their hearts, humans plan their course, but the Lord establishes their steps.

While it is not God's plan that I be president in 2016, or maybe ever, and while today my campaign is suspended, the fact that I've even come this far is evidence of how special America truly is, and all the reason more why we must do all we can to ensure that this nation remains a special place.

Rubio ended his speech with a final prayer, emphasizing his belief that what happens — whether in the election or in the country — is ultimately in the hands of a greater power.