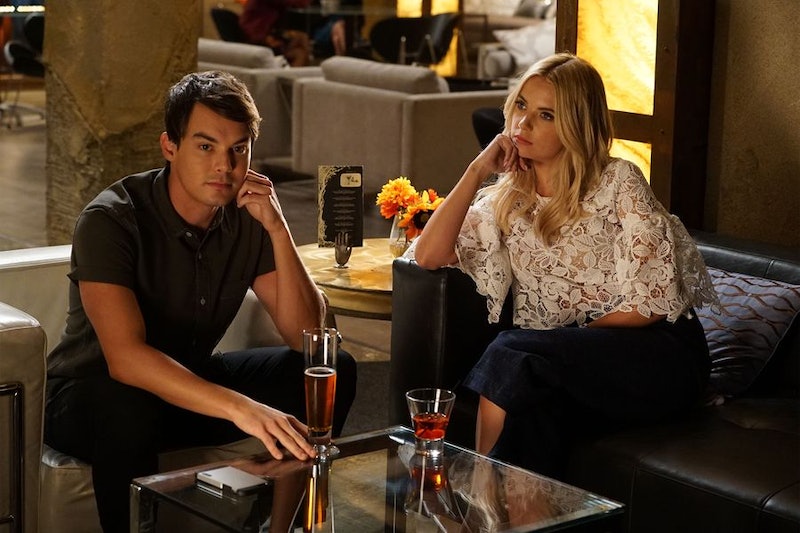 Scheming together was always Hanna and Caleb’s forte, so it was no surprised that, in their quest to find who had been torturing the liars this whole time, the former couple started reliving what could have been and shared a big old smooch. While waiting to trap A at the Lost Woods, they talked about their big fight — the one that ended their relationship — and it turns out that Hanna came back to Caleb shortly after he told her that if she left, he wouldn't be there when she got back. It was just a little too late. The nostalgia (and the fact that Hanna admitted she never stopped loving Caleb) got to them quick, and they shared a passionate kiss before Ezra came into the room and interrupted. Ezra Fitz, ladies and gentlemen — a life ruiner. Per usual.

So what happens now? Well, Hanna has been taken away by A-moji (that’s what Caleb called the villain — I would never, ever use that term if I didn’t have to) and the last we saw, she was being dragged unconsciously through the church's bell tower. Is she alive? Is she dead? Caleb seemed especially distraught at Hanna’s disappearance, which only makes it all the more obvious that they’re still in love. Please, PLL writers, can we make this Haleb show go on? I just can’t bear to see my favorite Pretty Little Liars couple (if you thought it was Ezria, you are delusional) be hurt any longer. Bring Hanna back, and bring Haleb back together when Season 7 premieres. For more on Haleb and everything else PLL, check out Bustle's podcast Taking This One To The Grave.