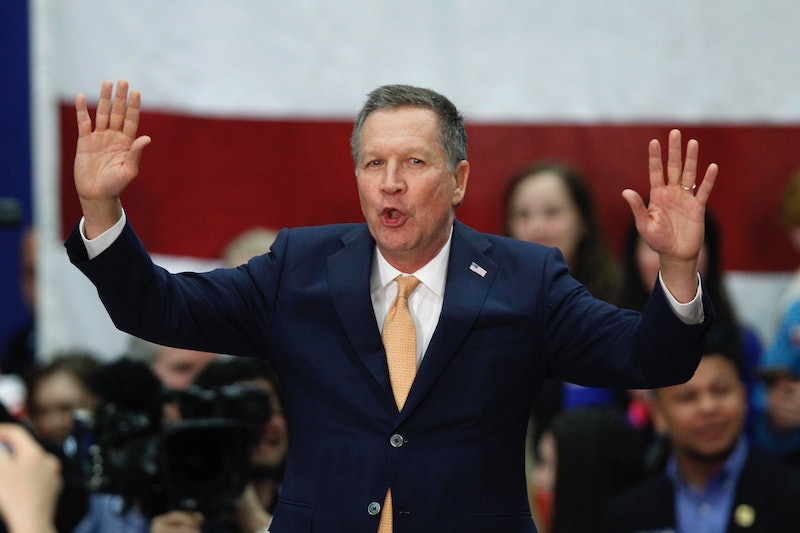 After Marco Rubio suspended his campaign Tuesday night, some Republicans took aim at a new villain. It wasn't Donald Trump or even Hillary Clinton. For those who had been hoping for Marcomentum to pick up steam only to see the senator get obliterated in his home state, these Republicans made John Kasich their new enemy.

Though the Ohio governor is reveling in his home state win, he may not want to celebrate for too long. (And on a related note, mind the confetti, Kasich). The Buckeye candidate has got a target on his back for some angry Republicans who wanted to see Rubio win the nomination — or at least save the party from the Trump stampede. The juxtaposition of Kasich's resoundingly jubilant victory speech shortly after Rubio officially dropped out of the race left a bad taste in some Republicans mouth — and, for that matter, non-Republicans, as well.

Nate Silver was quick to point out that Kasich should cool his jets before breaking into the end zone dance, reminding us that "After tonight, Kasich will have won 1 state out of 29." The real ire, though, came from the Kasich's own party members who framed his Ohio win — and, thus, his determination to stay in the nomination race — as just another means of stealing votes from Ted Cruz, the Republican most likely to beat Trump (though it's all very relative).

As Trump added to his already ample lead on Tuesday night, establishment Republicans hit panic mode — if they weren't there already. It's been made quite clear that taking swings at the Donald hasn't done much good (see Rubio's now-infamous comment about Trump's hands for sufficient evidence). The hastily patched-together Republican plan B is to unite behind one of most disliked members of the GOP. It's a dubious strategy as is, even if Republican leaders close ranks. However, it is especially hopeless if other GOP candidates continue to strike out on their own from much longer and split the anti-Trump vote. (Yes, there is still the possibility of a brokered convention.) From this point of view, Kasich is not an option, but merely an annoyance and a detractor.

Of course, it doesn't help that Kasich was never the GOP establishment golden boy that Rubio was. Although Kasich achieved a win in his home state — a fairly basic political task that Rubio failed to do — his concrete win didn't endear him with Republicans. Instead, across Twitter, eulogies for Rubio's campaign poured in, while Republicans wondered why Kasich was so darn happy.

However, Kasich doesn't seem to be listening to the haters or the grieving Rubio supporters. He's already making the claim that he can beat Democratic frontrunner Hillary Clinton — even if it's unlikely he'll get to that point.